Alright so the 3.28.0.0 update dropped and along with it the unity 2017 update. If you updated your game, you probably noticed that Germany, France and a whole lot of other custom, curated or official maps were underwater, had missing player clips and other devkit features. However, you may be one of the lucky few who doesn’t have this problem, now why could this be? Well, to understand why we must dive into what is broken and how to fix it.

So, ever since the devkit editor popped into existence, it has used decimal points to show that a number is a float. This means that decimal numbers were written as [3.543], [8.412], [1562.6235432] or… well you get the point. With the unity update today, you may notice how numbers are no longer written this way. Instead, they are written with a comma. This means that the set of numbers mentioned before would be written as [3,543], [8,412], [1562,6235432]. Now, why is this a problem? Well, devkit stuffs that were placed before the update have their co-ordinates, scale, rotation and everything else about them stored in a file called “level.hierarchy” in your map’s folder. This file still has the old co-ordinates of your stuff as you can see in this image.

When the game comes accross these values, it just gets really confused and just sets all values to 0, which is why most official maps are underwater. They used water volumes, which when they have a scale of 0,0,0 just kinda like expand into infinity.

Now, this isnt limited to the devkit either. If you take a look at your singleplayer world settings, legacy editor or literally anything else you will notice that they too use this new number notation. Here are a few :

You may also have noticed how not just maps are broken, but also weapons. This is because some of the values they used were also decimals as you can see in this sabertooth. 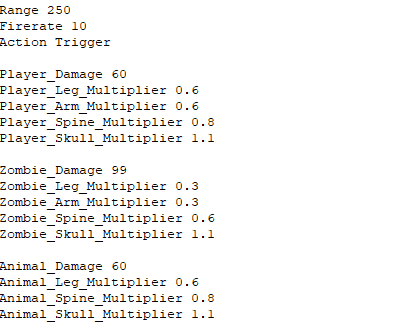 Alright, now some of you are reading this right now and probably wondering to yourself like lol wtf i dont have this problem danaby just validate ur gaem files and reinstall lol noob. Well, this is the weird part of this problem and it’s why I’m guessing this hasn’t been fixed by Nelson. First, we must understand cultures and different countries around the world and also windows. Many countries use decimal points to seperate decimals. These countries include the United states, United kingdom and most importantly Canada. Some countries however, use a comma to seperate their decimal boys like Poland and uhh well yeah just google it urself if ur curious im too lazy to do it myself. What does this have to do with the bug tho? well if your windows is in a language that uses these decimal boys, then your unturned will use them too. I legit like have no idea why like who at unity co thought this was a good idea omg.

If you’re a map maker and your map has been corrupted by this fatal flaw, you’re probably having a midlife crisis rn (lmao i can relate). But whatever you do, don’t go replacing all devkit features on your map because once the game starts using decimals again (which it hopefully will nelson pls) then it’ll be broken again.

So in conclusion, the only thing that needs to be changed to fix all of life’s problems is one comma boy and yeah also add a search bar to the resource tab pls & thx.

If you’re a map maker and your map has been corrupted by this fatal flaw, you’re probably having a midlife crisis rn (lmao i can relate).

lmao just move to a different country it’ll be fixed

thank you danaby 3 i was really worried.

Is pretty crazy! Who would have thought that commas vs decimal points could break so many aspects of the game?

Caused by a change in .NET implementation, so I’ve decided that was too risky and using the old .NET version in 3.28.0.1.

lets hope that fixes some of the other issues. Like Devkit terrain being Transparent in the editor.

great! at least we have some confirmation on what’s happening.

well if your windows is in a language that uses these decimal boys, then your unturned will use them too. I legit like have no idea why like who at unity co thought this was a good idea omg.

This is actually a bug fix from mono. Normally all .NET (C#) programs use current locale settings for decimal numbers, but Unity did not do this until they updated to newer .NET, so Unturned actually relied on a bug of mono. One can fix this issue by setting locale explicitly when converting decimal numbers from strings.

How to fix Unturned with danaby2.

Jesus Christ
what is with this new user wave

help dan why is rio like underwater wtf I’m crying