Vote for next update

At trello Nelson are undecided on what to work for devlog # 26, analog movement + stance cards or horde mode, what would you most like to see?,this can help him make up his mind 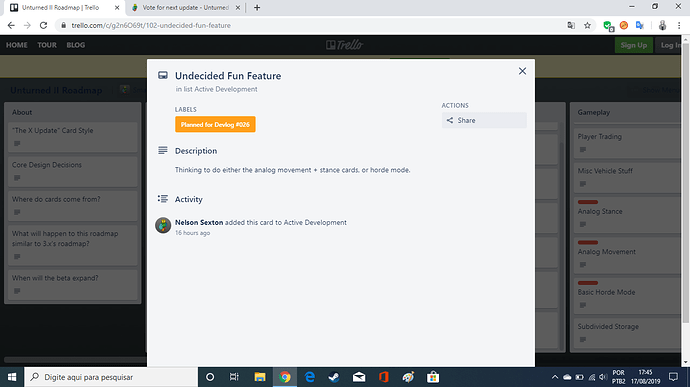 Okay, since I don’t know what stance cards are, I will vote for horde mode, because I find this kind of game amazing.

The answer is pretty obvious

But really, I think he should work on more important features first. Unless horde mode would be used so the beta has some actual replayability, making something else could be great to boost the progress

A fully fleshed out horde mode could work like a dream and would allow for some fun little servers. If possible I would like something similar to mine crafts large servers that let you play multiple modes at once if that is possible? So you can play 12 player game modes on a 48 player server.

As much as I reminisce about the prospect of an official horde mode finally returning, IMO stance cards are far more important at this stage due to the avenues they would open up in a variety of gameplay elements, including and especially with movement, combat, and stealth. Stance cards get my vote even if they’re not as flashy as horde mode.

Edit: Minor misinterpretation of the word “card” but still applicable. Thanks Molt.

The main benefits of Horde Mode are:

Analog Stance would be:

Analog Movement would be:

Hey everybody,
It looks like Nelson has some trouble deciding what to do here…

Let’s help him decide quicker by showing what we want!
I made this little poll to see which feature out of these three we would all like to see first, and to help Nelson decide which one to prioritize.

Show us what you think by voting!

More options would be nice…

I would like a small parkour map if analog movements + stance cards are being added.

Ask Nelson why not both. Maybe so he doesn’t get burnt out again? It’s not about choosing between the two, it’s about which one you want to come first.

Wasn’t a post like this already made a while ago? Besides, it’s the last thing Nelson has on the list before devlog 26 comes out, so I highly doubt it’s undecided at this point. He’s likely keeping it named such as to keep it a secret until the actual devlog comes out (although he has dropped hints towards it possibly being Horde Mode, it’s still uncertain until the devlog actually drops)

Idk who merged these threads (probably Molton, but Yarrrr and Nelson also have have those perms) but whoever it was broke the newer poll.

I think we have a result, Nelson put this image on the trello, I’m sure it’s horde mode

(post withdrawn by author, will be automatically deleted in 8 hours unless flagged)