What do you think the overnight stays at Unturned II should look like?

This is another very simple topic, from a question that recently came to me (since I saw that it would be possible to stay overnight in Unturned II), which is:

How will we spend the night at Unturned II?

Personally I thought of two ways this could happen, these would be:

First way - Like in minecraft;
After all the players go to bed, the night passes instantly and no creature suffers anything. This is the simplest but funcinal way that exists;

Second way - Like in minecraft mod Somnia;
This is a pretty cool mod that speeds up the world around the player when he is sleeping, with the impression that we are really sleeping, the hunger and thirst of the player would be increased, and that zombies and bad guys NPCs would also If we continue to prowl around, players would wake up if such an entity approaches, or if one realizes that it is there.

These are the two ways I thought, but I like the second way better, it would give us a sense of incredible realism, and I personally believe it should not bring problems to the game (assuming the player can only sleep at night).

Which one do you like best?
Do you have any other ideas, so say, I want to see how you expect this in Unturned II.
Thanks for reading!

Neither of these would work in multiplayer, but both of them would be fine in single player I guess.

Minecraft (the exclusively single player game) has mechanics that not only would be unlikely to be used in multiplayer, but also wouldn’t even work in multiplayer, which is why no one has ever even tried hosting a Minecraft server or even selected that middle option in the main menu that says “Multiplayer”

Neither of these would work in multiplayer, but both of them would be fine in single player I guess.

Minecraft (the exclusively single player game) has mechanics that not only would be unlikely to be used in multiplayer, but also wouldn’t even work in multiplayer, which is why no one has ever even tried hosting a Minecraft server or even selected that middle option in the main menu that says “Multiplayer”

How can we stay overnight at Unturned II?

Since in trello we have this

…Which wouldn’t happen on anything other than private servers with your friends.

Which is still better than nothing at all.

crying in the bath room over the carrots i ate, like always

Still, since Unturned will be survival based, those single/private server mechanics that would work mostly in those kinds of gameplay I feel like having a feature like the night passing by quickly would be largely appreciated.

This sounds like something that should be a plugin rather than the vanilla game. I don’t think sleeping to fast travel through the night should even be a thing, at least not in vanilla multiplayer UII. That wouldn’t feel right, and would just be shitty. Characters may have cubic heads but that does not make it Minecraft.

I think you should be able to “rest” in beds in multiplayer, which would not speed up any time but you can interact with your bed and wait there for a bit and get some granted perks, like slightly more acute weapon accuracy, and more able to hear sounds and things like that, as well as a bit more time to run/more energy.

Ah yes, having to idle in bed doing nothing in-game for periods of time to gain competitive advantages would “feel more righter” and be “less shitty” than a completely optional feature to skip to day time.

but both of them would be fine

I meant fine as in they would work in single player. I am very much against single player and multiplayer having different mechanics. I think beds should serve as to allow vanilla minecraft sleeping, and saving spawn points like in 3.0

No i’m saying they would have the same mechanics but singleplayer/whitelisted servers would benefit from it more.

I think beds should serve as a recovery object (Slight HP regen depending on your condition), but with a special function in singleplayer to skip the night and recover a portion of your HP.

Your necessities (e.g. Hunger) will still be reduced (Probably half of the rate of reduction) and any status effects would also continue to wear off (Probably faster), both depending on how much time has past.

Can’t sleep if you’re too hungry/thirsty.

Beds (cots, bedrolls, hammocks, etc.) should also be able to provide varying degrees of shelter from cold, heat, rain, etc, and perhaps chairs and couches could offer a lesser version of (some of?) the benefits we’ve mentioned but would also allow items, crafting stations, and other interactibles to be used.

Can’t sleep if you’re too hungry/thirsty.

Gotta hit us with that redpill, damn.

also are you saying it should exclusively be in singleplayer? If so why?

While it should be possible if everyone in the entire server slept, the chances of it is extremely low unless you’re in a private co-op server. So either add the niche multiplayer feature or don’t implement it.

I was thinking that the dev could implement other things such as adjustable sleep time in singleplayer, though it might be heavily abused to fast forward farming or other timed features.

Singleplayer should be played however someone wants, yes people might abuse it but if that’s a bad thing then we need to take out all the other customization aspects that can prove abusable (increased item spawns, etc)
I don’t think this feature should be limited to gamemodes because it’ll be used more often in said gamemodes

While the player is asleep/resting in the bed there could be dreams that occur which the player can play inside of so pretty much just mini games. To stop the dreams being repetitive people could submit them to the workshop giving much more variety and stopping it from being such a strain to have enough for it to not be boring. When a loud sound like a gunshot occurs near the player the dream should stop and the player should wake up.

How would an overnight stay in Unturned II be like? 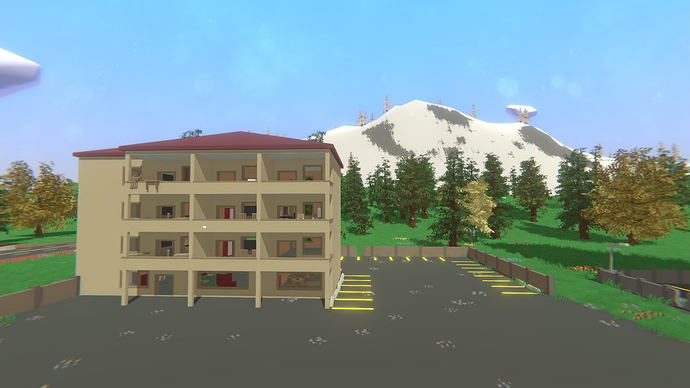 You check into a hotel for the night, enjoy the night life, and then wake up to a refreshing morning of zombies.