What even is BE at this point

We all know that BE isn’t the creme of the crop when it comes to anti-cheat solutions, but it’s getting kinda stupid.
At least two people over at the Untunred Disocrd (Greg and liamdoesgame) got banned. And (yes I know this sound stupid) whilst I can’t say I know they didn’t cheat I am ready to believe them.
Why this sudden change of heart?
Well, I too got banned, thats why. Or rather, I got unbanned without even knowing I was banned in the first place. All I saw was this 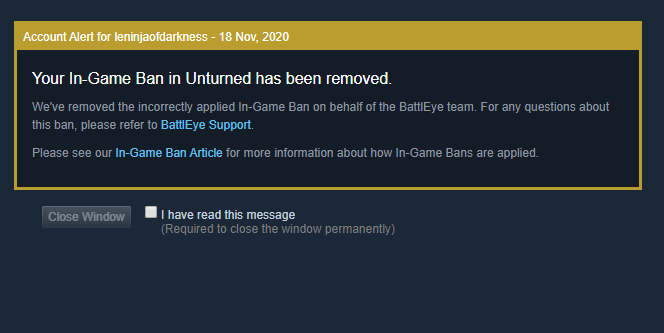 Anybody got any similar experiences? Is this another round of ban unban by the all seeing Eye?
Share your thoughts and predictions.

EDIT#2: Liam has also been unbanned

Update: Liam got banned again. * AFTER GETTING UNBANNED *

BattlEye is a dogshit anti-cheat. Nelson should just go with Easy anti-cheat for Unturned II or look into anti-cheats that aren’t BattlEye.

Some would say that EAC is just as bad if not worse though. I still haven’t experimented with anything multiplayer yet but I’d like to see just how many of these cheats could be blocked through reworking parts of the game.

I like how the forums turned a blind eye to average players posting here on the forums about them getting banned and only replying with: U sHouLD CoNTaCT BaTtLE Eye InSTEad oF PoSTing HeRe. but then when a known figure/regular posts they get some actual answers and a discussion starts about BE not being good lol

there are some examples, they barely got any recognition or ppl didn’t care

BattlEye kicks people out of games for using virtual machines. It’s probably the worst anti-cheat in existence. There’s definitely a lot of people who complain about BattlEye.

Just saying but an anti cheat switch isn’t gonna be any different. You can already search up numerous EAC false bans the same as searching for BE false bans.

So like, this post shouldn’t be taken as a good excuse to label it entirely unreliable compared to the numerous ban appeals posted here

I got informed that the dev was aware and said that they’re sorting it out as much as possible in case there are many others who were strangely affected. Well unless this isn’t a ban wave but happen to affect certain people coincidently.

Well one key difference here is that Deus was not asking to be unbanned.

BattlEye kicks people out of games for using virtual machines.

I honestly haven’t had issues like that. Are there any particular games where you’ve noted that this is a common occurrence? I know for a fact that Unturned doesn’t care about virtual machines, I run Windows in one.

Issue was resolved shortly after it happened.