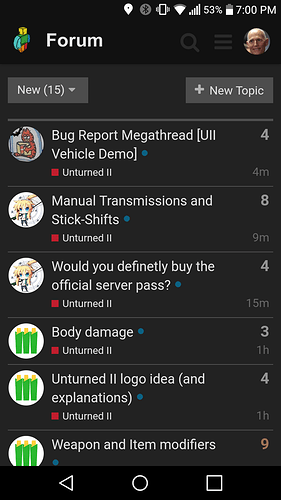 Because there was the vehicle demo and that provided a lot of inspiration.
Basically the hype train was back on track again.

Well, since some of us got the U II car beta and began to report bugs, people saw that this was a great opportunity to give out suggestions. As if we don’t have enough of those already.

And there can never be too many suggestions.

There can. I realized that in the SDG forums when Nelson is trying to work on some main mechanics, then you see people saying “Get Fighter Jets!”

Unturned II is suddenly super popular because of the demo

Did I miss some post or are you making up BS?

no its a thing, look it up on youtube, ive talked to a few people who have it and they really like it.

What exactly are you asking about?
The car demo? Or the fact that kids will always suggest “fighter jets” when Nelson is doing something important?

If it’s for the demo, then yeah, a select number of people got the demo for the car beta of Unturned II. I wanted to record the gameplay in case of bugs, but the replay was a literal slide show (1fps) while I was playing at a casual 40~50fps so I couldn’t record anything despite not encountering many bugs myself.

Or the falsehood that kids will always suggest “fighter jets” when Nelson is doing something important?

There are sixteen posts that turn up when you search for fighter jets. Not one of them is actually suggesting or advocating for them to be added.

Why would I be asking about the car demo? You literally never mentioned it in the post I was replying to.

Nothing wrong with a sudden burst in Forum activity.

Except for when they are FILTHY STEAM commoners

Try nivida shadowplay, that what i record my stuff with, and it is pretty good.

do I really have to specify that I was using “fighter jets” as a generalization of unimportant additions (as of the current state of U II). Because I ain’t gonna name every single suggestion that isn’t a priority to prove a point. I just used “jets” because it’s the first thing to pop in my mind and is the most unimportant addition a survival game should have. (imo at least)

and I was asking you

because I didn’t know which exact post you were replying to. So I was just including it in case that was what your question regarding.

Excuse me if I misunderstood.

Hey man, the steam forums are a pretty filthy place but you gotta give respect to the ogs that it spawned.