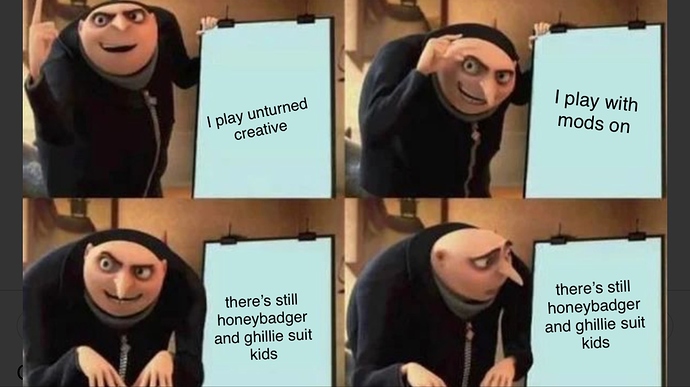 Real talk: What’s your opinion on the honeybadger?

Rarity is its only weakness.
Seriously, for a sidearm, it literally has no disadvantages otherwise

Edit: forgot about noise and durability. Still, vs other sidearms it has a vast lead in overall combat capability.

There is the noise and slightly longer draw time, but those aren’t very big drawbacks.

The Honeybadger is good, but many perceive it as OP, which it’s not.

Because it does regular damage, it’s the only gun that makes a loud sound when deployed, has bad hip fire, bad durability and doesn’t accept any barrel attachments

That may be true, but other sidearms have a wide plethora of disadvantages like time to kill, range, or other issues like how bad suppressor durability is in Unturned currently.

Wait, what is this “Honeybadger” you speak of? I was thinking about the PDW.

It’s an objective upgrade to all other sidearms, so regardless if it’s op or not it has that going for it.

Technically this post refers to the Honeybadger, a PDW-class weapon that was in the game for years but was removed a few days ago. The “PDW” you speak of was added immediately after with similar characteristics.

Something being renamed doesn’t mean it never existed. Checkmate, Sergei.

Backlash, Determinator, Desert Falcon, and Sawed-Off each have higher damage per shot than the PDW/Honeybadger.

Objectively better doesn’t mean it is a straight upgrade in every aspect, but rather it has advantages in other areas (such as DPS) that make it again, objectively, the best secondary in the game.

Melee weapons are better for killing zombies. Military ammunition and magazines can be difficult to acquire, especially on Russia. “The objective best secondary” is too broad of a claim to be accurate. Maybe if you had specified a purpose or situation your claim could be accurate, but as it stands, I disagree.

Backlash: in Unturned shotguns have massive disadvantages to other guns because their range is ridiculously bad. Good luck getting close enough to a PDW user to shoot them with this thing, though the Backlash is at least considered one of the best shotguns. In addition, the PDW will kill far faster unless you get one well placed shot to center of mass or to the head.

Determinator: Better reach than the Backlash, but still far below that of the PDW. Also a lot weaker in DPS. Most pistols outperform the Determination as well in several fields.

Desert Falcon: this thing is literally a high-caliber sink. It’s a huge waste of high-caliber ammo, but even if the ammo wasn’t a problem the Dalcon is still a cumbersome, slow pistol that requires two shots to kill unless you get an unarmored headshot IIRC. Thank the wonky semi-auto mechanics of 3.0.

Sawed Off: considered by most experienced players to be the worst shotgun in the game. Abysmal reach even for a shotgun, must be used at point blank to be effective.

The PDW simply reigns because of sheer DPS. By the time you realize you’re getting shot, you’re probably dead before you can even turn to face the assailant.

At point blank, the sawed-off is more effective than the PDW, my point isn’t that any weapon is the best, but rather that none of them is always the best.

The Sawed Off works better than the PDW exclusively at point blank. But in all other situations the PDW outclasses it for obvious reasons.

While your statement is true, you can’t deny that overall, you have a better combat capability with the PDW, because it’s not better in every way, but enough ways to give the user a significant advantage.

Are you even in the right post? This is a meme about 3.0…

What exactly is the difference with the PDW versus the Honeybadger, they seem to do exactly the same dmg to people and zombies and have the same noise when you first hold it.

The difference is that the PDW exists, and the honeybadger doesn’t.