Will we still have animations in our arms?

I know it seems like an idiotic and pointless question, but I would like to know if the arms of Unturned II, in the future will have more animations like during the walk or run like those on devlog#004, or will be more static, having complex animations only when we are squatting as today, this question too came after the arms became melee weapons.

Maybe it’s a little obvious but… I’ll explain, currently the hands are on guard all the time, so that all the time we are in “offensive” mode. However in the future there will be a way to lower the guard with some button, which will allow us to have a peaceful pose.
It is obvious that extra animations will be added. We just have to give it time.
It’s like if I ask:
Will they add an animation for eating the can of beans or food in general? The answer would be yes.
However, if you are not sure, you can still ask. There will always be people to clarify your doubts

I saw Nelson say that possibly we will no longer be able to hold 100% consumable items in our hands, probably only when showing the consumption of the same, he said that it is to save on development.

Oh :c i hope that we are able to take any item on our hands. u.u

It does look silly at the moment! My intention is to add something like the gun safety stance from 3.0 where you can toggle your fists active / passive.

I understand, having fists with armed guard, and normal fists with movement animations.

OH YES!!!
Now i just hope that we can grab every item in our hands. I think it could be nice.
Or just usable items as before.

Oh btw, it would also be nice if down the line you added various rifle carrying stances. Rather it would be for a certain type of rifle like let’s say you’ve got a World War II surplus rifle like the M1 Garand. While going into combat, a soldier would carry a rifle like the picture below because it felt natural for the most part. This is while we’re speaking about firearms animations. I just think it would be cool, it’s not necessary. 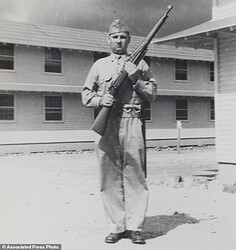 image634×670 69.6 KB
The running animation on the other hand will look like the picture below. It’s not necessary but I think it would be a cool edition to the game in general to have different resting states and running states for the rifles like what I’ve just showcased rather than the typical modern low ready position used with modern assault rifles. 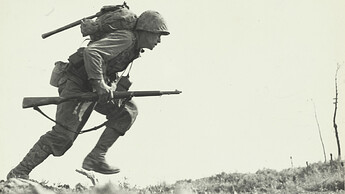