A painful reflection on Unturned 2

The truth is that I have practically lost hope.
And it’s really hard for me to say that, because I’ve been following the progress of this game every day.

It’s probably sickening, but every night before going to sleep, I always check SDG Blog, SDG forum and Trello. It’s a daily routine that I used to really enjoy, but for a long time now, it’s been painful.

A few minutes ago I saw the new June development blog and well, nothing, there is absolutely nothing for Unturned 2, and not only that, it has also diverted Nelson’s attention to Unturned 1 again. So the only thing that happened with an Unturned 2 from our perspective, was the blocky version of the character, and after that he has been sidelined again.

I know Nelson can decide what to work on when he wants, but I think it would be great if he could at least tell us when he really plans to work on Unturned 2, or if he still enjoys working on Unturned 2, because he seems to avoid it or is not as passionate about it as he was in the beginning.

And also he seems to have more projects, and now more things to fix and add in Unturned, in the end it seems to me that he will end up improving Unturned 1 so much to the point where he will realize that Unturned 2 is not necessary. And well nothing, that makes me happy for Unturned and sad for Unturned 2 at the same time.

But it really makes me feel hopeless that he seemed to work on Unturned 2 again, but all he did was to start the debate with the modeling to test the blocky character. And from that discussion I would think that the winner would be blocky modeling or at least a mix of both, but however, for Nelson there was no winner, so he did nothing, he didn’t go for either, he got bored and went back to Unturned 1. Who knows for how much longer until he comes back.

I just wish I knew, Nelson, do you still like Unturned 2? Do you still love it?
And if yes, then when do you plan to work on it?

That’s all I want to know, and that’s all. Sorry if I sounded annoying, but I just wanted to get it all out. And I really respect you Nelson, for me actually, I could say that you are my favorite game developer.

And this is mostly my fault for focusing so much on Unturned 2.

Anyone else who has something to share? Or who has shared that same routine? Feel free to comment or contribute.

For what it’s worth, I am sorry to let you down.

I know you in particular were excited when I mentioned focusing on Unturned II again at the end of May. Some discussion of character designs is definitely not much to show for it.

You are right that I did not feel as passionate working on it in June as I did when the project started. Two of the main things I worked on were base building and some character stuff. I think the reason I did not feel as excited was because I feel optimistic to make similar base building improvements to Unturned (3.0), and there has been a lot of recent discussion about it, so it felt like “what is the purpose of doing this here in Unturned II (4.0) rather than in Unturned (3.0)?” Similarly with the characters I thought the revision might be a great upgrade to fix some of the issues carried over from the original game, but considering the mixed feedback again it felt like the improvement between games was not big enough.

Obviously upgrading the base building in Unturned (3.0) is a lot slower because it means backwards compatibility for mods and plugins, and requires more netcode rewrites (planned as part of 2021), but for these sorts of improvements I feel like if it’s possible in 3 it should be done for 3. i.e. I want 4 to be “the impossible” upgrades like entirely redesigning the character.

In retrospect, a lot of my statements about Unturned II have been irresponsible because it has been delayed so much. IIRC a 2018 contract with Epic says its expected early access release date was late 2018. I am being too much of a perfectionist. I wish I could say when I will be happy enough with the foundation to commit to a consistent update schedule.

My take on this is to approach Unturned II just like you did with 3.0.
Not to the extent of OPERATIONMAPLELEAF being a secret code and stuff like that, but approach it leisurely and develop as you go.
So, if you end up using the same “develop as you go” approach, make a semi-playable (or outright playable if you’re invested into making a really good start) map, some more improvements and additions to round it up and release it. Only problem with this, is that it’s virtually useless until you shift your focus almost exclusively to Unturned II and you seem invested into making 3.0 a much more playable game than it was before.

So really, this is ultimately all for you to decide, but i hope at the end of the day, Unturned II doesn’t end up like 3.0 where getting the brunt of the game’s big mechanics (like netcode and base building and performance optimization so far) getting fixed after years of new maps and fancy new vehicles to blow stuff up with.

Slower progress on UII means more time for my personal projects, and more opportunities to assert dominance over the future UII modding community.

I’ve got a bunch of projects I want to do involving Unturned II but I’m able to put aside the slow development just because I’m still figuring out my own schedule and what workflows work best.

With this building, I originally wanted to make it for the summer MapJam (has it really been two years since that happened?) although time constraints kept me from being able to do much of anything. Next goal was to make it in more of a UII style, although considering the things I mentioned before about prop examples, I ended up going back to the original 3.0 standards and dimensions. It was a spur of the moment thing but at least it’ll serve as another reference object for my building editor.

UII is just one of those dreams that goes on while I figure myself out.

an official 2.0 server would keep us occupied while u work on II

@SDGNelson I get it that you have to work on two games at once, it’s legit a hard task for a single person to do this. I’m still excited for Unturned II myself because I personally believe that Unreal Engine is better than Unity. UII is a significant improvement over Unturned.

Hate to be that guy but I told you so

Without a doubt i have respect because you are one person army doing those things and especially good developer,but i think keeping unturned 3.0 with updates is a bit unneccesary.Reason for that is (not looking at pay to win situation) is doing great and have kinda big comunity and i think UII will be the solution is like a big update, they are the same games but with diffrences in gameplay,graphical inprovments and others.
P.S :have a great summer nelson ; ) .

there is nothing else to say. 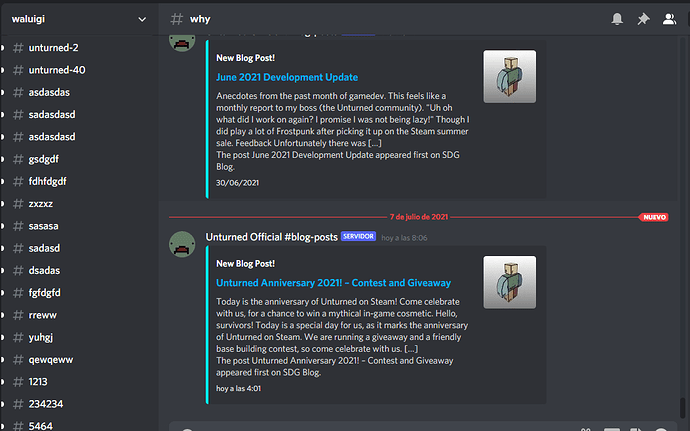 What are you trying to say ?

It’s Unturned’s 7th anniversary, I don’t see how that should be related to your ‘painful reflection’ on Unturned II.

Em, look up to see the context my friend, also, ok for the anniversary but, it matters to my post? No.

Well it does, assuming that with your last screenshot you’re referring or pointing out the latest new blog post. (If it ain’t the case, then I don’t see the purpose behind it). You can’t take that as an argument, it ain’t a random blog post, you can tell by common sense and checking the current date.

XD dude, i am not referring to the last blog, i am showing that i have a lot of servers attached to the unturned notices, so i get 10000 notification when something new comes out XD
Stop trying to see hostility when there is not >:(

lets let this post die please, sorry for the necro

Unturned is a finished game lmao, there is no real need to update it other than to fix bugs and what not.

Imo I think Nelson overestimated his capabilities thinking he could make a new game from scratch on Unreal as ambitious as Unturned by himself and then learned in the middle of development it wasn’t possible, but instead of coming clean and admitting that, he doesn’t wanna look like a you know what and admit it. He’d rather let the ship sink with a 1 man crew than let it sail with a crew of multiple people.

Maybe this question was billion times asked and answered, but Nelson, why you can’t hire some people from the community to make Unturned 2 and just pay them money? Is it your personal desire to make your game himself, or something different?

and just pay them money