I lost the Sweden Folder, so instead, Ill make Alberta for Nelson

Oh, finally. Did you upload the beta to the workshop?
P. S. MAPMAKERS, PLES ALL THE PROVINCES

Did you upload the beta to the workshop?

not now, i will soon, i wish i can do it before my friend come visit me tomorrow

I maded a beautiful keyboard with some book 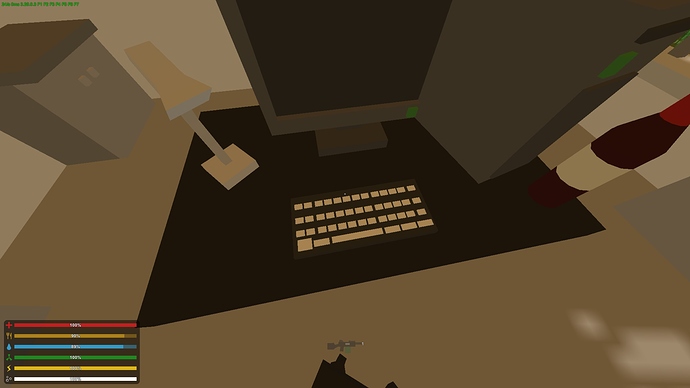 Try not to use compound objects like that, usually they cause lag, and in general its just a far better idea to make models.

just a tip, nelson will not accept compound, at all. It’s a major no no. And Compound is kinda cancer.

if you’re going to make a map, I would follow this guide on how to make your map good. Also I know it’s been said twice but don’t make compound objects. Not only does it usually look terrible but it also can kill fps if used in excess. Also you really shouldnt call this post a “Devlog” if you’re not actually showing anything substantial. 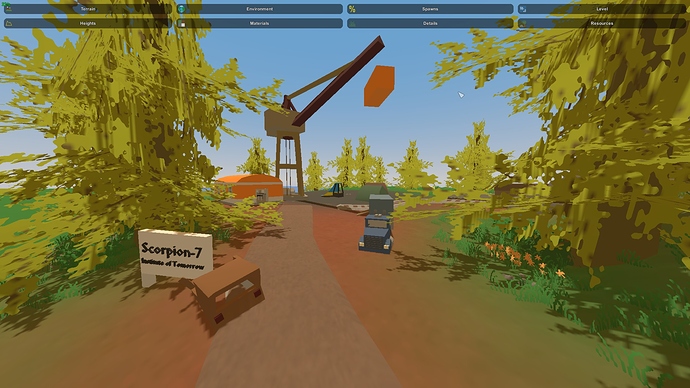 just a tip, nelson will not accept compound, at all. It’s a major no no. And Compound is kinda cancer.

so i will remove it

Going to run down the list of what Nelson requires in a curated map.
Keep in mind this guide came out before Hawaii, which is why Nelson says things like

and there’s plenty of nature that hasn’t been seen in Unturned yet from palm trees to small ferns.

1 - Please avoid super high contrast colors - they’re painful to look at especially when used in the lighting. Most of the official content has sort of medium intensity colors.
2 - Don’t go darker than RGB 30, 30, 30 and if something is 255, 255, 255 that’s probably a bad sign.

While not mentioned this is a requirement, you need custom materials and trees, nor can you use other curated map’s assets. This includes: Hawaii, Greece, Ireland, UK, Carpat, Rio, France, Cyprus, Athens Arena, Bunker Arena, Belgium and all other maps that are coming.

1 - Loop roads together so that there are a variety of routes/circuits to take around the map, and twist/bend the roads a bit to cut the view distance. Curving roads are more interesting to drive on and make the map feel bigger, and having the roads connect back to one another provides more options and better flow. This was one of the takeaways from the Canada map if I recall correctly.
2 - Preserve some space between the locations and the map border
3 - each small town contains a subset of key building spawns like police, medical, food to encourage movement with the large cities having all of them but more dangerous thanks to concentrated zombies and players.

Editor:
1 - Keep things lightly apocalyptic
2 - Snap grid-aligned objects together to avoid z-fighting/gaps.
3 - Use scaling reservedly and only for objects whose proportions don’t change.
4 - Rather than creating compound models (out of wooden pallets is a common choice) add a new custom object for it.
5 - Vehicles that look driveable should be driveable, with the exception being those that don’t have a system for them yet such as trains. (since changed, but still kind applies) For the most part the destroyed vehicle models are obviously beyond repair, but with objects like the wooden skiffs/kayaks keep them away from the water or sunken/wrecked.
6 - When detailing an area it’s easy to forget some polish objects e.g. manholes in intersections, fire hydrants, mailboxes, garbage bins, so it can be helpful to take a look through a similar area on another map and make a quick list of useful objects.

General:
1 - Use 2^x texture edge lengths like 2, 4, 8, 16 rather than arbitrary numbers like 3. Different edge lengths like 4x8 is fine. Unity will show a NPoT “Non Power of Two” warning in the texture preview window if an arbitrary number is used.
2 - Textures with UVs in [0-1] should be set to clamp, otherwise set to repeat.
3 - Flat colors usually use point filtering, detailed surfaces like boulders use 16x trilinear.
4 - In most cases each mesh should only have one material.
5 - Large objects that should be seen from a far distance need a very low quality “Skybox” object. This is shown in the buildings video and in this post: Raising Unturned’s View Distance
6 - Split transparent and opaque geometry into different textures/materials e.g. leaves on trees from the trunk, chain link fence from the fence posts.

Buildings:
He even included a video guide for the standards for buildings and walks yours through the unity process.

This video is rather long, but if you’re interested to see how I go through making the official buildings this should cover it all. It turned out to be a real nightmare with the Russia map so at the least you should skip through a bit and see if it looks familiar.

Edit: Looks like I missed the railing areas for the navmesh! For those you might add a ramp similar to the windows or keep them as-is depending on where they are.

The Required unity version has also been changed since then, it is now 2017.4.4f1

1 - The vast majority of official content barring some of the very early models follow consistent measurements usually in multiples of 0.1 or 0.25. The measurements for buildings are listed on the separate objects documentation guide.
2 - With buildings being some of the most complex models for the map it’s important to keep them easy to change, and separate the optimized and unoptimized versions.
3 - Most building textures are 4x2 and follow a consistent unwrapping scheme.
4 - Create a separate collision mesh if needed, otherwise the lowest LoD is often fine, but definitely create a navmesh helper so that when baking the navmesh the zombies can be a bit smarter.
5 - Make sure the interior culling lines up with inside areas to prevent hiding nearby objects like AC. For objects with multiple interiors far apart you can use occlusion areas as shown in the video.

Organization in Unity is key if you are having trouble with learning how to mod, get into the Modject and ask for help. @FlodotelitoKifo can assist you with letting you in.

1 - Animals should be quite near together so that the game knows to group them into a pack when spawned in. So far the passive animals have been placed in bigger groups than aggressive animals.
2 - Loot/zombies/vehicles match the area, for example finding fire gear, firefighter zombies and a firetruck at the fire station, and referencing a group of items rather than individual item types. Fortunately the recently added spawn table system makes this very easy and will keep your spawns up to date with new content (so use it) - in fact this system was made with accepting community created maps in mind.

Nelson even made a tutorial for the Spawn Tables.

1 - Experiment with baking navmeshes early and take care of areas that players can abuse the zombie pathfinding.
2 - Ensure locations are spaced out enough that the pink boundaries around navmeshes never touch, and that there’s a bit of buffer area in the navmesh between the edges and the closest spawns for zombies to chase players away. Keeping locations further apart especially on large size maps can also be handy for a performance boost thanks to loading less details.

Oh and something Nelson didn’t mention, keep nodes off roads and outside of navmeshes.

New foliage/trees/environment is one of the most immediately differentiating aspects of a new map, so I’d very much encourage it, and there’s plenty of nature that hasn’t been seen in Unturned yet from palm trees to small ferns.

General:
1 - Detail/resource density on ultra settings should be similar to density on official maps, much higher and you’ll start running into performance issues.

Examples of these can be grabbed from the Bundles/Sources/Examples folder. The alpha channel of materials is used as height allowing a really nice growing between the cracks look as opposed to a simple transparent transition. To get the grass detail color I usually scale down the ground material image to 1x1 and then use that for items like the ghillie suit, clothes, vehicles, etc. Assuming we’re working together, if the color is significantly different from Forest/Desert/Russian I’ll add versions of each relevant military building/vehicle to match it.

1 - Most materials should be automatically baked aside from parking lots and biomes.
2 - Dither material biome transitions in low quality mode rather than a sharp edge.

1 - The vast majority of resources should be automatically baked aside from berry bushes, mineable rocks and decorative foliage.
2 - At the moment all leaf textures are 64x64, but you might need 128x128 if you have multiple leaf textures. The same rules for trees/resources/materials/details apply as for the objects mentioned above.
3 - For the tree chopped down particle effect I usually like to have a 128x32 sheet with 4 leafy branch images.

Speedtrees wasn’t mentioned here, but I’ll mention it now, it’s a god sent that makes trees actually look good, the trees you included in your screenshot are “Old Trees” speedtrees are their much nice looking versions. Speedtrees cost 20$ a month. https://store.speedtree.com/ 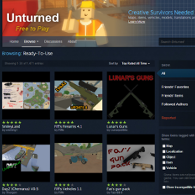 This guide provides tips/advice/rules on creating maps for consideration to be officially integrated into Unturned....

what have you done?

Hawaii trees on PEI materials? This is beyond sin.

adding on to what Nolan said, also, try not to use assets from other curated maps. It ends up making everything mismatched and ugly overall.

When creating a Devlog I think you should have solid chunk of content to showcase first.

if your changing your materials and trees, i’d recommend using France mats and trees as well as Russia pines

They look good on my map

nnonononoonnonon don’t use france. its a lie. not real, renaxon lied about it existing, and hes a lie himself.