Another look at Craftable Mythicals

About 2 2/4 months ago, AJ posted a thread suggesting that crafted mythicals should be applicable to a cosmetic of your choice, Nelson replied with “I considered making it a tool, but I think that would quickly crash the mythic item values.”, this is a good point.

However that made me think, what if the price of applying the mythical changed depending on the rarity of the item? That way the value of mythicals would be relative to the item they’re applied to, which is how it currently stands. If you were able to choose whatever item got the mythical for no cost difference, all mythicals would remain a similar price, regardless of the original skin’s rarity.
(In other words, a rare mythical skin like a sportshot is going to go for £1 while a legendary mythical skin like the Zubeknakov would still be going for 60 quid. But in this alternate reality both skins would probably go for about £30, which isn’t too good)

This is how I picture the cost of mythicals based on their tier:

With this in mind; The Mythical you get STAYS RANDOM. You should not be allowed to choose what mythical you get. (Unless everybody thinks you should)

Even with these prices, who’s going to spend 6 quid on a mythical for a common skin? I think I would, maybe once or twice. And that’s actually good, it’s expensive but affordable for the skin.
Again, who’s going to spend 30 pounds (or nearly 40 bucks) on an Unturned skin? Not many people. So with this in mind, the worth of mythicals will only become more divided, rather than worthless.

Edit: One additional note, you’d apply the mythicals by going into the inventory workspace, click “craft mythical” Then choose, for example, Rare Mythical, then it would open your inventory with only rare items shown, and just clicking on any will apply a random mythical to that item.

I actually spent a while on this thread, so I’d really appreciate the support, I’d also like to hear Nelson’s view on this, is it too complex to be worth implementing? Does Nelson have a totally different plan for craftable mythicals? This is a suggestion after all, I hope it’s considered and I hope you all like as well.

This is actually equal to 2½

I know, I just couldn’t be bothered getting the ½ symbol online. In retrospect it would’ve been way faster to just look it up and copy paste it. xD

A rare mythical Sportshot would be going for 200$ smh.

Does this mean I can have a Mythical Mikeyy’s Bronze Hells Fury?

If so, I’m looking forward to an update which includes this.

Well, no. Because the Bronze Hell’s Fury isn’t in the game, but if it was then it’s totally fair game. 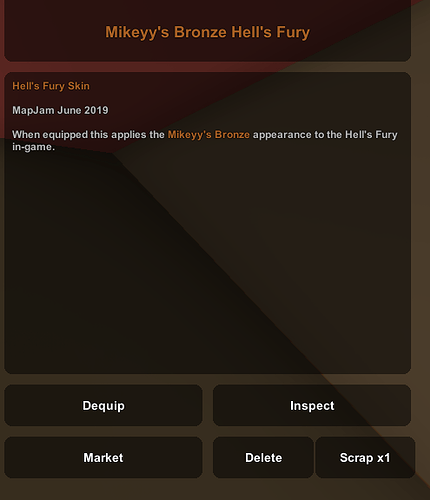 That’s actually a good point, since it’s not an official skin it might not work.
Then again, I didn’t even know you could make your own skins without having them added to the game.
I can’t answer the question unfortunately, but I don’t see why it wouldn’t work.

It’s apart of the map jam ran by Animatic and sponsored by Nelson. Nelson made custom skins for the winners depending on their positions.

Thinking about it today this is way better than the current completely random system - great suggestion! I’ll implement it for the next update.

how much profit can be made by buying low-tier items for a few cents, scrapping them, crafting mythicals, and selling them?

As a former market profiteer who literally relied on the Unturned (and CS:GO) market to fatten up my Steam wallet, I can assure you it’s not profitable. Not consistently, at least. Unless you’re good with fooling people into buying at hyperinflated prices, in which case it just becomes kinda sad.

I’m all for this new addition as it’ll make sense from all perspectives.

how much profit can be made by buying low-tier items for a few cents, scrapping them, crafting mythicals, and selling them?

Very little. Realistically, low-tier items should either see a natural increase in price, or the mythicals should sell for cheap.

In Unturned’s case, there’s an overabundance of commons and uncommons because of all the weapons that can be skinned, and the amount of camo/solid patterns. They’d all stay at relatively the same price as they are now (3 to 5 cents) as the supply is still quite high, and is the easiest to replenish.