So, update transitions for Unturned can be hard, especially for servers.
Servers that don’t update at the right time can be cut off and generally it can get a bit messy.
So… What if we make it so when an update is released, you can opt to stay in the version before the update.
To save space, every time this happened the version before that is removed.
What do you loves think? <3

update transitions for Unturned can be hard, especially for servers.

too bad. you’re running a server. if you can’t handle the bare minimum of responsibilty, don’t run a server.

So… What if we make it so when an update is released, you can opt to stay in the version before the update.

people can, and will report bugs from old versions that are fixed on the new versions. see project zomboid, they still get some bug reports from people playing from builds before cars were even a thing. my only development experience is from roblox, but nelson probably could thinl of another 100 issues with that that I can’t.

also, you know how in minecraft, some servers allow anyone between 1.8 and 1.16 to join, and they do this by simply disabling all new features past 1.8? yeah, I don’t want that.

Unturned & Project Zomboid are very different, I know you love it (almost as much as ILY! <3) but you have to understand the difference and stop comparing the two.

Archive versions are different from normal versions.
We’re just doing 1 update behind, so we wont go to broken itterations (+ UNTURNED ALREADY HAS ALL THE OLD BROKEN ITERATIONS).

Do at least a bit of research, dear.

All I’m asking is that the previous version before each unturned update is included in this little menu: 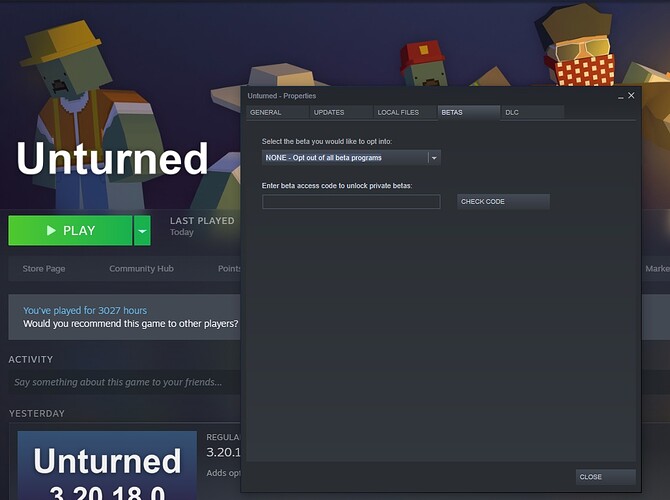 yes, that’s the thing. you can’t join a 3.0 server with a 2.0 client, the netcode is so wholly different that it just won’t work.

We’re just doing 1 update behind, so we wont go to broken itterations (+ UNTURNED ALREADY HAS ALL THE OLD BROKEN ITERATIONS).

you didn’t like my project zomboid example, so I’ll give you an example from minecraft
do you remember like a year back, you could crash 1.12.2 servers in minecraft by joining with 1.12.1 and using a bug that was patched in 1.12.2? of course, bukkit and so on quickly patched the bug, so most servers are immune to it, but it was an interesting week where you could load up impact and go around crashing servers.
literally any game with multiplayer built-in, and I can show you one example of version incompabilities causing major issues.

archiving 2.0 won’t cause any issues, because it’s that, an archive. 3.0 was mostly coded from the ground-up, so nothing will work with it. but one version behind current can make a a big difference. exploits would have a field day with this.

Do at least a bit of research, dear.

I’ve been playing since 2.0 but fuck me I guess

We’re not proposing such a dramatic difference in versions… 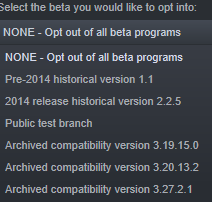 these are fine enough, and if you really want to get a previous update you should learn how to use steam depots and the steam console
(i’ve done it before to get early versions of 2.0 on steam to datamine, it’s not that difficult)

I’ve seen plenty of situations where the server owner didn’t bother updating so that only the people already on at the time were the ones who could play.

I don’t think it’s the best idea to make a version that’s always one behind though. At some point you’ll need to update the game anyway. At most make it so that you can join older servers by going through a confirmation menu acknowledging potential risks. This feature likely wouldn’t cover every transition though.

How would that even work

Not only is OPs idea not thought through (what about exploits, why fracture the playerbase even further, plus all of Turklers points) but he is also bragging about basically spamming suggestions

No, there is no way all of those have to be separate threads. No, I don’t think all of them had thought put into them.

Set your preference to update the game “Manually” instead of “Automatic”. When you log in to Steam and see an Update, don’t click on it yet as server owners are not instantly there when a new version comes. Instead, enter the game by loading it through the “desktop” icon and you will be able to play the outdated version until the owner shuts it down for update, and only then update your game.

I have always managed to play older versions while everyone else was waiting for the server owner.

That is actually a good idea since launching the game via Steam forces an update. Should not take more than an hour or tow to update active servers.