A copy of rust idea than i wait view in unturned. Its simple. 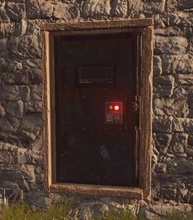 A code lock to place in doors, windows and trapdoors with a password of 4-6 characters (0-9) Just numbers.

Maybe code locks can be used in

#That go Turn huge groups inviable because fryendly fire and chance of traition.

#And go turn huge groups less op because you lose position on minimap and in your screen with this. Difficulting “callouts”.

I think dying is too much. Maybe you will get damage.

Why would you die after four tries?

Give it a timeout period after getting it wrong too many times and this would be good.

Agreed. Timeout Periods would work Perfectly instead of death. Besides, you dont need death for any type of fail (Unless Life).

Plus code locks in rust dont kill you, they make error sound and keep you locked out.

A code lock to place in doors, windows and trapdoors with a password of 4-6 characters (0-9) Just numbers.

Maybe only 4 characters like in rust? Make it easier for people to remember their own code or we will get so many posts about getting locked out of their base.

If you miss code 4 times you die

WOah there partner don’t you think that’s a little harsh? This being a rust based suggestion why not just use rusts way of doing it? You take a small amount of damage for each wrong code you put in. So much simpler for new players, How are they suppose to know they die after 4 trys.

Might lead to base stealing, Again just follow rusts way of doing where you have to have access to another code used for giving the player “admin” on the door

what does this mean, are you trying to say people without the password can’t use the door? Cause wouldn’t that just be a given with a code locked door?

Maybe code locks can be used in

All of this works I guess yeah, I wouldn’t want the code lock to be placed on a sentry though. It should be tied to the group system and if that is missing than the code lock should just be built into the turrent by default.

#That go Turn huge groups inviable because fryendly fire and chance of traition.

#And go turn huge groups less op because you lose position on minimap and in your screen with this. Difficulting “callouts”.

overall this is just “add codelocks” but with extra steps.

Code locks do damage via electrocution for incorrect entries, and this damage increases each consecutive wrong attempt.

So actually, they do kill you in Rust.

to any start spam the code at discover the password, its a ting extremaly easy make a code going of 0000 - 9999

Good look coming up with a macro that does that.
Remember, it’s a combination lock, meaning that you have to input four values individually. Even if the computer listed all possible combinations at once, you’d still have to input them manually.
And if you can use it with a macro, then Unturned II’s codelocks should then just have mouse support, meaning you have to click each number individually.

And if you can use it with a macro, then Unturned II’s codelocks should then just have mouse support, meaning you have to click each number individually.

Thats where a time out would come in

Youre right I’m bad at math, but still battleye in rainbow6 detects inhuman things, so im sure it would kick you if you really wrote a macro to do this. Also a cooldown would still fix this, i.e wait 10 seconds after getting it wrong 3 times in a row, then 30 etc

This one guy in R6S tested battleye with multiple tries, from a macro that would press the knife button a thousand times to actual hacks, and he even reported himself, sent messages to moderators, etc; and it still took more than a month or two for him to get banned.

One of his videos has been posted here before. If I recall correctly, he only used basic macros for a short time then moved to “more genuine” hardcore hacks. The entire journey was meant to be a piece against how bad BE’s implementation is in R6S.

Regardless, Nelson could implement his own kick for this as it’d be overloading the server by sending so much so quickly. I believe similar things have been done in U3 due to crash-related exploits.

I don’t think there’s an issue. The feature isn’t being designed to be broken with hacks. Hacks breaking the game really shouldn’t be considered imo. May as well just delete the game at that point.