i don’t think a random survivor could repair a nuclear power plant. However, i think the player should be able to repair wind turbines, solar panels, create a system for a coal / oil power plant … he could repair the power lines and that would allow him to reclaim a city.

here is my suggestion for how the energy would work :

Coal : produce a lot of energy but is very loud and produce an insane amount of smoke

thermical Power Plant : produce a medium amount of energy but is loud , produce many light and smoke

Wind turbine : produce a moderate amount of energy but is loud and dependant on wind

Water turbine ( if it is the correct name ) : produce a moderate amount of energy but need to be somewhere where there are water flows.

I made a english variant 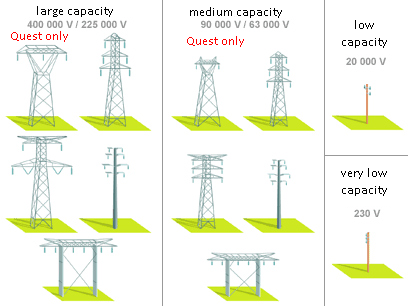 So i will explain my idea.

i think that there should be multiple energy transporation, the 2 lower ones ( between 230 and 20000 V ) would be the only repairables while the 2 highers ones ( between 63 000 and 400 000 V ) would only be quests results, and i think it should be same with high production power plants. with this , you could light cities or use their energy to get access to new locations, for example, you could open a bunker door or activate a cable car to get in a mountain or activate some elevator . One thing that is sure is that it would allow a higher cooperation between players since it would need a large work power. They would cooperate to rebuild the world… that would really change the gameplay…

there could be different powers plants depending on the map, or there would be no power plants on some maps, i think there should also be an option to desactivate the large power plants reparation in server / singleplayer config…
Well, i also really appreciate your ideas, they will allow to improve this idea.

This has been discussed multiple times, ya know…
Good post, though.

i know but this topic isn’t finished, i will frequently add new informations that were not posted before.

Thanks for improving on my lousy topic xd

this would be up to the player to find a utility with this.
the main idea i had was mainly to put light on cities or allow to use trains, cable cars, open bunkers doors. Creating weapons, clothes with machines? No but using machines to create high tier components to repair stuff or create material, why not i guess, it would make the game harder, nesseciting a lot of work to be able to create a end-game stuff , but it wouldn’t be survival anymore . the main idea i had were to :

grow plants using a sprinkler system
create a liquid pipe system or a conveyor
create a automated door with a password
allow to use electric train , cable cars.
enlight the cities?
plenty other systems that would be the less OP possible.

Great improvement on the Electric system concept my friend. There is nothing in this post I do not agree with. The idea of reclaiming a city sounds amazing.

Utilizing Wind, solar and water for electricity was also a nice touch.
Looks like people will be going green in Unturned.
hopefully not from the zombies

feels like something that’ll be added somewhere down the line in development, And it really helps the survival aspect Nelson wants in this version so i totally agree

I can see the RP servers already.
@NeedlessMemeing knows what i’m talkin about

I don’t know what you’re talking about.