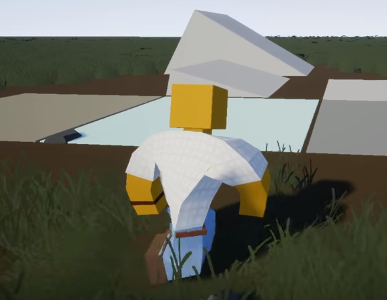 would be better fix the right arm, looks weird

EDIT: It would be better to to just make the clothing not the same number of slots as before you cant put em in at all

it would be nice if the slot capacity is smaller compared to what is shown (or 3.x). It’s a bit too large and makes holding on things too easy.

the only reason i didn’t comment on this was because i thought the size was merely placeholder. i HOPE it’s placeholder. if it’s not it needs to be shrunk WAY down.

also the video i posted was a positive “Fuck it”, not a negative one. the sheer amount of memes it could generate is worth the risk.

I think we need the clothing slots shrunk down and more backpack variety with many different sizes (maybe even some for specific item types?? not sure how it would work but its an idea none the less)

Sorry, I wasn’t very clear about that: All of the storage sizes (and values in general) right now are temporary/whatever I set them to while prototyping the features. In general guns will be bigger than 3, some storage smaller and some bags bigger + certain storage for different item types (e.g. pistol -> pistol holster, arrows -> quiver) and ideally implementing nested storage containers soon.

Hello fellow humans. It is worth pointing out things you assume to be placeholder / a known bug, thanks m8s.

YES THANK YOU
My eyes were wide open when I saw the new inventory. Its amazing. The amount of clothing slots there is is just mind-blowing. The ability to inspect items, being able to equip attachments through the inventory, it’s awesome. I also noticed that unlike the previous iterations, there isn’t a primary and secondary “equipped slot” which makes sense. Maybe if you equip a sling and/or a holster it adds those slots?

The animations are really well done as well. You don’t float in the air anymore, you don’t turn like you’re on an axis.
Overall it’s great to see how much the game has improved since the first devlog. Keep up the hard work.

maybe with pants and shirt storage, it has separate areas so you can put big guns in them, like say you added a gap in between 2 storage areas int he pants, which represent the pockets, and for one, I like the all the clothing slots, makes your character amazingly “customizable”(does this word not exist??) and I will actually be able to make the character look how I want it to, so I think it looks good, though one thing, when you make the really sharps turns and the body bends so far, ugh sorry it just looks so unnatural, let me sent you the times int he video I mean (0:02-0:05). And I also like the style of the doors. SO good job nelson, keep up the good work

Was about to make a big thread about it until you said that.

For official servers, that is bullshit.
But the ability to play as any entity is cool for custom servers/custom gamemodes.

I’ve only got one issue and that’s the fact that the playermodel looks abnormal as hell when contorting the body to turn.

If you could reduce this from your lower body twisting nearly 90 degrees into something more natural such as a diagonal sidestep that doesn’t resort to our characters snapping their spinal cords whenever we break into a sprint sideways while looking in another direction. Might just be the T H I C C body model at work, but it looks really unnatural and painful to watch.

Other than this minor issue, you’ve managed to make a rough draft for an inventory system that Bohemia Interactive couldn’t do better with all their funding and resources in almost a decade.

For official servers, that is bullshit.

I’m not sure about my take on it personally though.

i’ll admit that, but “bullshit” implies that there’s something about it that messes up balance

be animal on a vanilla server is … strange.
but still useful for custom servers

This is looking absolutely great! Thank you for doing this!

As for the playing as an animal part mentioned on your blog, I would love the concept, adding a new mode around it or simply selecting between the two groups when joining a normal server. Though what I disagree with is the whole animal part itself.

I think you should be able to play as the zombies/infected instead of animals (or perhaps both, if you’d really like to flesh it out), as the game is centered on them, similar to Left 4 Dead 2s versus mode, which would, if executed well, add a great competitive-ness-ish that will keep the game alive for years to come (Left 4 Dead 2, for example, is almost 10 years old, yet it’s average player count is almost 15k! That’s impressive for a 10-year-old game, and we mostly have to thank versus mode for it.)

Thanks for reading, I’m really excited about the upcoming blogs!