He already said he’s prioritizing optimization and that performance will be far better in 4.0 with the lack of having to load in and out content constantly throughout a game.

Very gud moi man. Your awesome Nelson XD Hope we get to see another 20 years of unturned being well known, or maybe more. I hope to see this game evolve till the end, so keep being awesome.

oh thanks man! my english is really bad!

Damn fine progress.
Only thing that irked me was seeing those shell casings being called ammunition… Shell casings!

But there’s one other problem.
NO BRAN.
Petition to Bring Back Bran Cereal?

Damn, the new ammo system is going to be sweet!

aim assist? could this mean 4.0 will have console support?

I hope the font will be changed in the future to something more clean and appeasing, the current one is really boring and sort of an eye-sore.

As for the rest, I’m hyped!

I hope the font will be changed in the future to something more clean and appeasing, the current one is really boring and sort of an eye-sore.

Why is the handguard essential, but not the stock?

I don’t recall this ever being mentioned anywhere.

It’s mentioned on the wiki

The wiki is not active yet, and cannot be used for that kind of information. 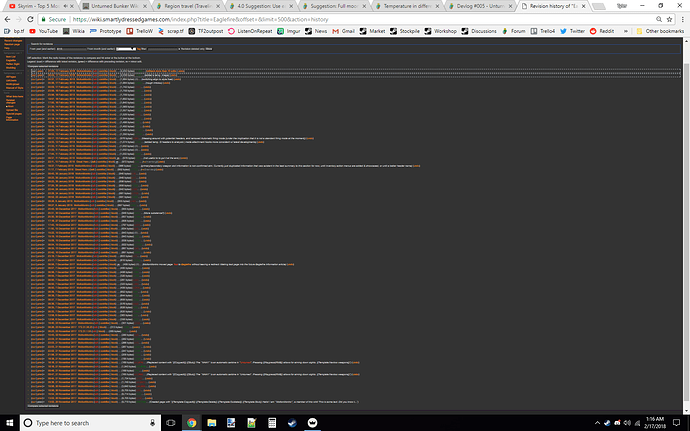 Clarifications Regarding the Wiki SDG Wiki

Continuing the discussion from Molton knows how to wiki!: Clarifications are needing to be made somewhere. Putting this in #uncategorized for now, however #unturned-4 or #site-feedback may be a relevant category instead. Will it replace the FANDOM wiki? Simple answer: no. This new wiki will be for Unturned 4 only, until otherwise decided. This was decided during a brief conversation with Nelson regarding the best use of it. As long as any of the current Unturned wikia staff members edit on …

The wiki is under construction.

Aren’t you the one who added that part about the attachments and components and the stock not being essential?

Information on the wiki is a mixture of confirmed information from Nelson and assumable speculation (ie: it can be assumed that a stock is not mandatory, especially since no attachments require a stock to to be attached). Primarily, the information is currently formatted in whatever way makes the most sense for creating a structured page design for when the game is actually released with more complete information.

Until the first public test branch of 4.x, the wiki is hard under construction and cannot be used for that kind of information reliably. That aside, @GreatHeroJ did a decent job explaining the differences between ammunition, attachments, and components.

Isn’t the buffer housed inside the stock of an m4?
Where did (s)he explain that?