Although I was just doing these as a test for some other stuff and not all of it is specifically pertintent, here’s a graphic you can look at to get a good idea of what those options would lead to more-or-less. You can also get an idea of how many ranged weapons there could be if all (more-or-less) the firearms from Antique, Classic, and Unturned 3 were added to 4.x.

So I guess by extension you can comment about how many guns should be in Unturned 4.x. Personally, I’d prefer having five made by the first main public release to ensure there’s a good base scale to balance around, and any potentially needed mechanics (ie: shells in general) can be put in place. (Specifically, I’m talking about a long-range rifle, an assault rifle or automatic carbine, a handgun, a shotgun, and a machine gun.) 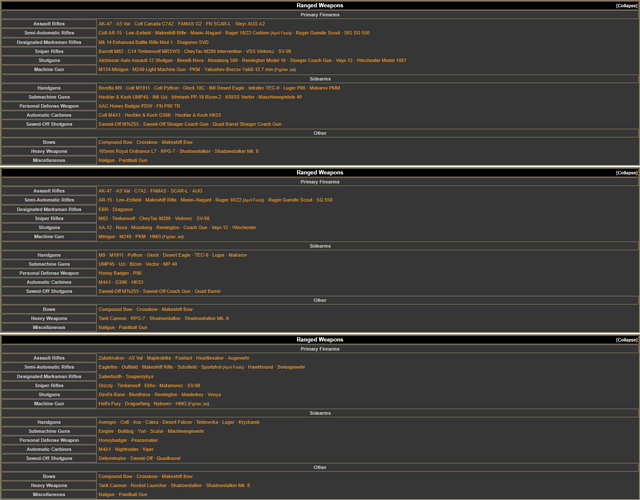 calling the viper an hk53

molton i swEAR TO GOD

Lol xD
This is also kinda Unturned’s charm. Having unique and awesome names. Uniqueness is the best way to go

Arguing over what the Viper is (PS: It’s a freaking MP5)

Ah, the magic of the hardcore Unturned community…

The problem with using real names is that when you go to balance the gun for the sake of gameplay you get gun nuts saying “Oh it doesnt really function like this irl, its should be more accurate/higher damage/faster firerate.” Using a unique name allows you to “base” the gun off of a real life counterpart without needing to copy it completely.

i should probably make a serious contribution

i feel like guns in unturned should have fictional names, but still sort of…not nickname-y, more gun-y

like what kind of company calls their AR15 an Eaglefire? it could be like a DR91, for example

((i dunno the nickname style just kind of bothers me))

I think just having like an M4A1 called N4A1 or a FAMAS called GAMAS would be cool.

wtf didn’t know that there was a terrorist group called like that.
my bad

Oh yes, I would definitely love to shoot with a Gleagle, maybe stab someone with a Satana and steal their Feretta.

I think the naming convention is perfect the way it is, I’ve only had an issue with the maschinengewehr so far but got used to it pretty quickly.

Bruh whats a sabertooth though

narco i swear to god

I think the current naming system works fine, but I would like to see somewhat shorter and more realistic names overall. Maplestrike, Eaglefire, stuff like that works fine, but stuff like “hell’s fury” and “devil’s bane” kinda don’t imo

If most people prefer the custom/unique/more-original gun names, then what do people think about the magazine/ammunition/caliber names?

And what about the different gun types/categories?

If most people prefer the custom/unique/more-original gun names, then what do people think about the magazine/ammunition/caliber names?

And what about the different gun types/categories?

i think the way 3.0 handled magazine names was horrible. “Swissgewehr Magazine”? “Military Magazine”? like jeez. 2.0 did it better, each magazine actually had a unique name.
the “Magazine/Box/Drum” thing was also a bit weird, if only because it didn’t allow for many kinds of different magazines without getting strange.
ammunition/caliber was alright enough i guess.

and the gun types/categories were mostly fine, except the fact that almost all the SMGs were thrown under the Carbine category was just dumb (and their status as secondaries is…debatable.)