A neat little window could pop up (featuring the Nelson preview window ®) allowing you to diagnose yourself (upgradable by skill) and see what needs to go where. 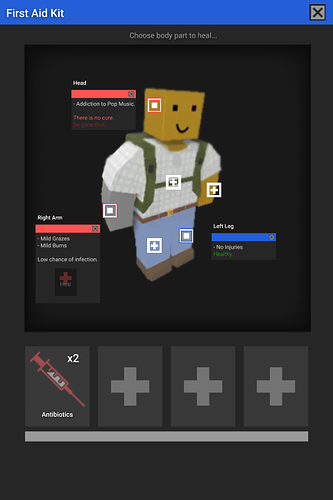 If you’re lazy and don’t care about conserving resources, but need healing NOW you can alternatively just left click again to quick heal, where the medkit heals every part of your body that is injured, prioritizing the more severe wounds over things like minor grazes.

tl;dr allow the player to manually choose what part of their body they want to heal and with what, but still have a quick heal option.

I like this kind of idea since Unturned needs to slow down the healing process unlike in 3x that your hp goes up even if apply a fu***** splint.

Bandages should work as a way to stop bleeding and very slowly raise your hp up.

Love the idea. It would also benefit the pvp. Because now you can heal in 3 seconds. While then you need to reatreat, heal yourself and then go back fighting.

Yes, i do like this suggestion.
Perhaps if this was implemented it could be somewhat similar like Arma 3 Advanced Medical (from ACE3, 2:58 showcases the menu), using a bandage can heal but if the bleeding is too severe it will take several bandages in order to stop it.
This would also prevent the “instant recovery” after taking a .50 to the face.
I’m definitely looking forward to this suggestion.

Nice ui and I feel like this was already suggested or planned.

Do you want 6 separate health bars? Are you sure about that?

The Long Dark does this without 6 separate health bars.

there is no cure

It is just like the mist survival with some differences. The thing that everybody likes about mist healing system that you didnt mention is that rags and other healing items dont give you more hp they just stop the bleeding and other injuries . Player regenerates over time

I very much like this idea. It allows for a more complex and more challenging survival experience but also retains the ability to save you during a fast paced conflict. Maybe more minor inflections such as burns don’t do any immediate damage, but rather doesn’t allow for you to have 100% health, rather healing to 90% or something. Also this holds the possibility for infection to become an issue if problems are left untreated. Hopefully this is an idea Nelson takes into consideration!

minor inflections such as burns

Inflections has to do with how you’re saying a word.
Infections can be viral, bacterial, or fungal, but would not include injuries such as burns.

In The Long Dark, healing items aren’t used to instantly restore HP,(which instead regenerates passively based on how much food, water, and rest you’re getting,) healing items are instead used to remove status conditions which are all associated with a body part.

That’s a cool system to have if in UII there would be implemented more varied ways of hurting yourself, like cuts (made from spikes & barbed wire) and gunshot hits, the first maybe cured by bandages and the latter by suture kits.

And to keep the medkit somewhat up to its rarity it could be kind of a jack of all trades.