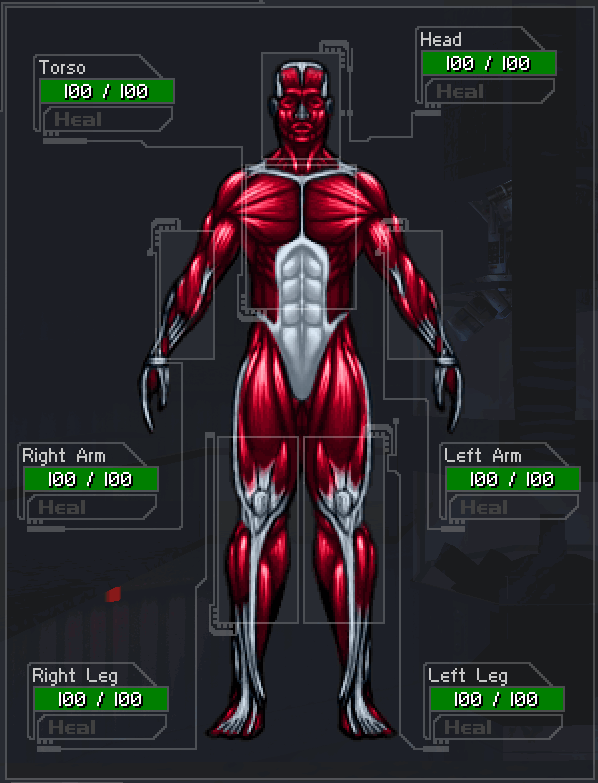 How about debuffs that kick in when a body part is below 50%?
Minor falls will only affect legs, but major ones with affect torso as well.
Get both legs to 0% and you’ll only be able to crawl.
Painkillers instead of healing you will instead negate those debuffs.

I don’t really have much to add as you have summed it up already. However I like were your coming from and I have also wondered why if u got shot im the arm.you can still perform perfectly :? I reckon that would be cool and give PvP an extra element as once you can aim if you have an good enough gun you can win quite easily in cqc it would be kinda like breaking a leg interns of debuffs I’m guessing. Tldr Noice

I like this idea. It makes survival and PVP more fun and challenging. I support this idea!

I like where you’re going with this, however we have no idea how complex Nelson wants the mechanics of this game, and having multiple health bars might make things confusing for new/younger players. Plus, maintaining health over multiple parts For that reason, I propose a slightly more simplified version, as well as fleshing out some potential effects for each part having low health.

Instead of having each limb being separate, put them in groups (Head/Torso, Legs, Arms), similar to how they are now.

Edit: Sorry if I kinda hijacked this thread to put this here, I didn’t do it intentionally

I don’t think it would work

Mind elaborating instead of just saying “I don’t think it would work”?

I will contribute an elaboration that we can pretend @FruitGish said, but secretly actually didn’t as it really just came from an anonymous source that is space and time itself (very anonymous)!

It’d be possible, but it could detract from other core gameplay mechanics or be adding on too much on top of other things and would just make the game less entertaining for most players. It might only be worth the feature if advanced movement stuff is added, like rolls and such, which this would work as a counter-balance.

One of the major problems that could be foreseen is stuff like not being able to use items while severely injured being a major bore for most people and just ruin the game for them. Stuff like blunt weapon strength skill could also overly complicate the game for people, and make it too confusing for people to easily remember on-the-fly.

Some people have been quite vocal about this kind of feature in the past, but usually that was also in conjunction of “fixing the blocking bullets with arms being possible technically albeit never practical” issue. Possibly just bullet penetration could be in the game, and then that feature could also be extended to vehicles and objects and ammo types.

Of course, it ultimately depends on the direction Nelson wants to take the game, and, as a mere FruitGish, all “I” may provide is an opinion that is totally coming from me, myself, the mighty FruitGish! (No mockery intended, it’s just to help disguise the message as one coming from you for poor man’s joke.

I hope this analysis reflects your beliefs well!)

Is that Deus Ex?

Blurryness and such when hit in the head and unconiousness

seems like a good idea for zombies but not the charters.

Something like in Project Zomboid where you have to bandage each wound for itself. Meaning if you got shot in the leg, you’d have to remove the bullet to completely heal the wound, leaving the bullet inside the leg would cause lower max health to that body part.

Reminds me of EFT, would be an awesome addition for 4.0 =D

This is getting VERY Tarkov, sounds good at first, but at the same time, would we want a Tarkov-Unturned? After a fight it’s going to be much harder for you and way easier for the guy you killed, if he decides to do so can just run back to his death point and punch you to death because you’re limping and have all jittery aim. You can’t do anything about that. I think it would be cool if we implemented an idea like critical hits to crippled body-parts and such, but, not stuff like limping etc. Because everyone can endlessly respawn fully recovered, dying would carry no risk.