I’ve read through everything and found it all to be fairly convincing, @P9nda in my personal experience is a pretty chill guy until you seriously piss him off. Sven here seems like the guilty party, though personally I think P9 could have handled the situation better. However, as we have yet to hear from the opposing side of the story, P9’s provided evidence seems solid enough for him to be telling the truth.

sheeesh what an asshole sven sounds! im not even a minute in and hes sounds like an ass!

after hearing the first minute we definitely need new mods for the discord.

after hearing the first minute we definitely need new mods for the discord.

The discord is not ran by Nelson. It’s a community Discord ran by Sven, so Sven can run it however authoritatively or democratically as he wants to (as stated by Nelson in response to a different ban controversy).

And as such, I (personally) don’t consider any of the various Unturned Discord servers to be official.

That’s not the point of the discussion as far as I’m concerned. The discussion that you’re trying to draw out of me is similar to asking if I think the Unturned subreddit should have had all of its staff replaced because of the “meme ban” controversy.

Similarly, that subreddit is not ran by Nelson. They can run it as authoritatively or democratically as they want, regardless of my (or more relevantly, Nelson’s,) opinion.

I’ve already made my position pretty clear as far as I’m concerned. If you get banned from someone’s Discord, and they don’t want to unban you, then

. It’s their Discord, not mine, which makes my opinion irrelevant when it comes to, say:

we definitely need new mods for the discord.

I’ve been copy-pasting this anywhere someones discussing the video, so enjoy. I also talked with p9nda personally regarding this, and he replied that the video was made on his experiences and he would only make a video including some of the things in this depending on Sven’s reaction to the video.

I was banned too, take a guess why.

I called Sven a “dummy” because the emotes were blurry - which is what happens when you try to upload a large image for a emote and Discord downsizes it. He refuses to talk further on my unfair ban, and multiple attempts at using an alt simply got me a ban. It is very sad that me, a person that likes to interact, communicate, conversate, and get with the community is banned. Heck, I even run the longest lasting Unturned clan/group because I love meeting new people.

But it gets better.

He has banned countless people, including my group members (RA) for simply being in RA / associated with me. His excuse is that every RA member is simply an alt of mine.

Sven. A very abusive community member who makes Rocket. Soon I’m going to make a video about whats wrong with Unturned 3.0 behind the scenes and why 4.0 will suffer the same exact problems. Sven is a core example and a big part of the video. He abuses his powers given to him by Nelson - which he has simply out of Nelsons laziness to make his own plugin API.

He has abused countless times, and Nelson simply shrugs it off calling it “a mistake” and that “we all make mistakes” and etc.

He wrote a code to Rocket which was like a backdoor, giving him complete access to ban whoever he wants to off of every Rocket Unturned server -

Before he wrote that backdoor he created a service/plugin called Rocketmod Observatory, essentially a universal ban system. If you were caught hacking on one server, evidence against the hacker was to be posted on the Observatory website and a jury of multiple people would find them guilty/innocent. That might sound need, but Sven has complete authority over the website, banning who he wants to ban, with or without evidence, even if they wern’t hacking, with no trial of peers / multiple people. Ontop of that, he stopped Observatory as a plugin, rather opting to make it APART of Rocketmod, so every server was under the observatory universal ban system by default. 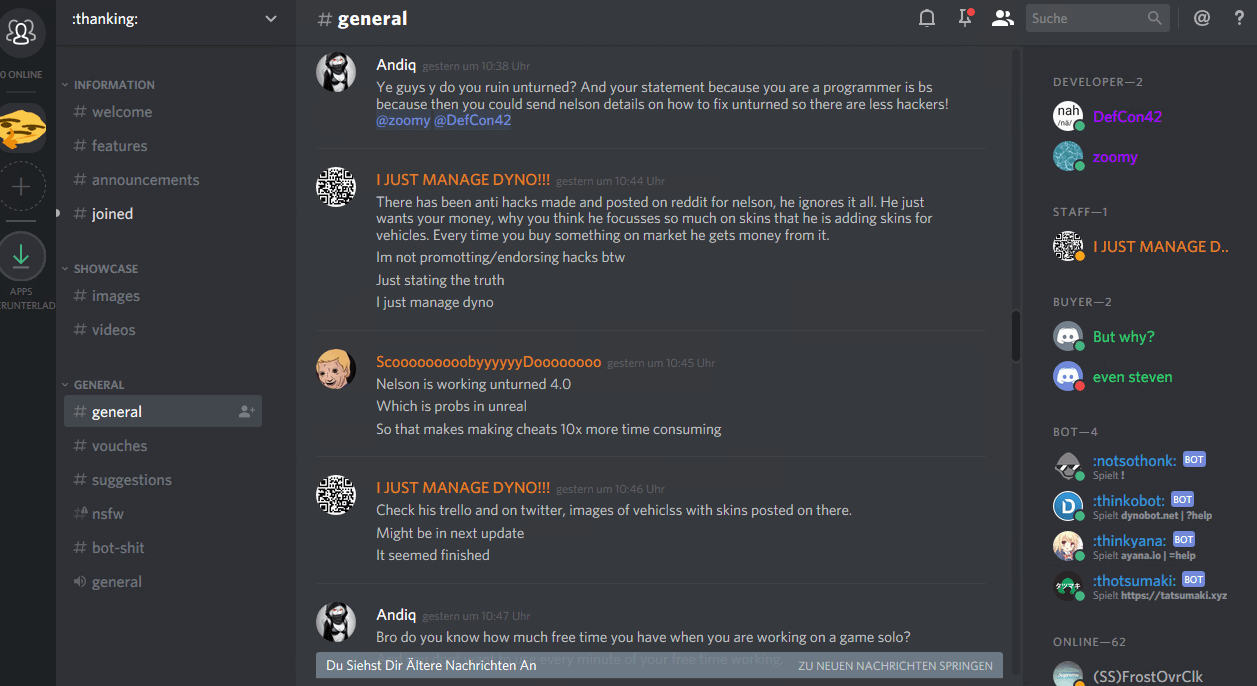 About Sven’s abusive, terrible actions he replied this -

And back to the Discord. Someone told me that a Youtuber had been banned from the Official Discord, but threatened to make a video against Sven and his abuse. Supposedly he was unbanned to stop such a thing from occuring. Very corrupt behaviour for both of them, but it really showcased who Sven is

Sven is truly a bad person, and he successor is no better. Supposedly Sven hasn’t been developing rmod much, rather another person named Trojaner, which, runs an equally abusive Plugin market website and has an equally as bad ego / behaviour.

edit: Two things. 1 It would be funny to see Sven/Trojaner burst in here to defend themselves. Which would be counter productive as I didn’t make the video, they should be talking with p9nda.

And second, as evidenced by the last screenshot Sven is clearly going to just tell p9nda to fuck off. Unless Sven wants to act all innocent because p9nda is one of the larger Youtubers, then that only shows his behaviour off more - cursing out and telling normal people to “Just shut the fuck up and annoy somebody else” while sweet talking YT’rs

the first untuned drama has commenced

Of course not. As I said here

Sven. A very abusive community member who makes Rocket. Soon I’m going to make a video about whats wrong with Unturned 3.0 behind the scenes and why 4.0 will suffer the same exact problems. Sven is a core example and a big part of the video.

4.0 will be just as bad as 3.0. Maybe not in the foreground and what everyone sees and plays, but moreso behind the scenes (very much how the content in p9nda’s video isn’t something the average Unturned player would come across, IE server owners only and people that interact in the community) Supposedly Rocket will not come to 4.0, but you never know how lazily the 4.0 plugin API will be. Maybe it wont be Rocket, perhaps somebody else will create a different named API. They could still have as much power as Sven did / does now. off-topic but if you wanna read about the video I could PM you the details, as I’d love some people to help out lowkey.

Sven is truly a bad person, and he successor is no better. Supposedly Sven hasn’t been developing rmod much, rather another person named Trojaner, which, runs an equally abusive Plugin market website and has an equally as bad ego / behaviour.

edit: Two things. 1 It would be funny to see Sven/Trojaner burst in here to defend themselves. Which would be counter productive as I didn’t make the video, they should be talking with p9nda.

Considering naming-and-shaming is against the rules on both official forums for Unturned, it would not be funny if Sven/Trojaner felt the need to come in here and defend themselves because someone made a post that had partly consisted of just insulting them personally, regardless of whether or not p9nda said it in here.

Explaining what they did and why its wrong =/= insulting and calling them names and other nonsense. Thats just how I see it. Sven is the core of p9nda’s video after all and is being “named and shamed”, so if anything…

But I suppose it wouldn’t be funny, would it. Moreso merely pointing out he should address p9nda instead of bothering to reply or talk about my comment if he did decide to come on in here.

Similarly, that subreddit is not ran by Nelson.

Also, another thing to point out is unlike the /r/Unturned reddit, Nelson is apart of the “Official” Unturned Discord, and “Official”-y endorses it. That isn’t good enough (by Discord’s standards) to be an actually verified official discord as the actual owner of a project / game must have direct ownership over it (which Sven has, not Nelson himself)

Nelson has wiggled his way out of things regarding anything to do with the Discord by pointing out that he doesn’t own it and that it’s a “community owned” project like he said here https://prnt.sc/h2kst4

edit: I’d go as far as to say Nelson endorsing the Discord should mean he is somewhat liable for what happens there as he trusts the staff, otherwise he shouldn’t have endorsed nor had it officially advertised

everyone in this thread is completely wrong, in my opinion the battle royale mode in counterstrike global offensive is a great mode with interesting concepts and fun gameplay that will provide hours of entertainment to me and my friends.

I have tried to talk countless times, talked to other mods and hoped they could convince Sven to talk to me, even messaged Nelson about this, but nothing for months.
I just wanted to discuss it offstream offrecording back then but he didnt want to. All mods talked shit about me and didnt care at all. One Mod (Deus) told me that he and probably some other mods dont support the ban but he was too scared to stop Sven. “He would probably demote me then”.

Other Mods were just accusing me of doing stuff I never did and claimed to have “solid evidence” for the accusations (In this case me scamming people for steam items).

Even the “now that you threatened us, we wont talk to you anymore” was the same day I decided to record that video, after months of trying to get him to talk to me privately.

They are now crying and bitching about me uploading that video and monetizing it.
I have given them all multiple chances and I never wanted it to get that far but they didnt care.
No one does anything against Sven and if, then the voice is most of the times unheard.
Sven is now claiming that I took screenshots out of context and accused him of stuff he never did apperantly.

He keeps going, instead of thinking about what he has done wrong. He doesnt want to talk publicly about it because “its not publics matter” when hes clearly the reason that it became public. He keeps avoiding questions and cant justify himself.

I uploded that to show whats really going on in that discord and the hate towards me.
Mods literally lying and shittalking, Sven scamming and being Sven.

This video was more than neseccary.

This video was more than neseccary.

P9nda’s ban is completely and fully justified. He was being incredibly toxic not just towards the mods, but also towards members of the community.

Despite what he says in his video, we had begun the appeal process because of the original cryptic ban message, but he then attempted to blackmail me and the other mods saying he would release a video defaming us if he wasn’t unbanned.

It was childish behavior like this that lead to his original ban and the reason that his appeal was shut down only minutes after it was brought up in the team chat.

This will be my final statement here, and I’m requesting a closing of this thread as I don’t believe this forum is a good place to discuss this topic.

Could you provide any proof of me being “extremly toxic” please?