So it seems this “Community Lounge” is for off-topic things so i guess its a good place to ask something about laptop memory. I have this Exo Smart X-2 m1323 laptop with an Intel Celeron N2830 with 2 cores and 2.16 GHz and 2 GB Ram.since the shipment and extra cost i cant buy a better laptop im thinking of changing the memory to 4 GB.

So, will changing the memory be worth it? Will it make a big difference or a small one? Right now it cant run minercraft or even roblox, only games that worked good was portal 1 and half life 2.

i ask here because im sure more than 1 user knows about this stuff or about intel processors.

The only thing increasing RAM improves is multi tasking (Running multiple things at once). It doesn’t boost your game performance or capabilities to play intensive games but more of a slightly better web browsing experience

But yeah, 4 gb is better than 2 gb but still low compared to modern minimum standards.

Really the minimum amount of ram you should have in your pc is 8 gb.

Always do your research before buying a pc for something specific.

With the age of the computer he currently has I would assume that he previously had it but can’t afford to get a new one. The processor is fairly weak so it shouldn’t be expected to do much.

If gaming is a desire the best thing would probably be to get a new computer. An extra 2 gigabytes of RAM could be helpful but that consideration should be made based on what it looks like in task manager and obviously if the computer supports the addition.

Looking at alternatives to upgrading RAM or buying a new system, swapping the hard drive for an SSD would be a good option that’ll definitely show an improvement. With adding RAM, it shows the most improvement when you’re using most of what you have already just for regular tasks.

Most or really 90% of all programs require 4 gb+ if he gets 8 gb of ram, it’s going to be a huge performance boost.

I wouldn’t say “huge” performance boost. More RAM doesn’t automatically make the CPU better. The processor does support a maximum of 8 gigabytes but with how little performance it has it won’t make sense to run a lot of things at once.

He has become to powerful, somebody stop him!

If you wanna play unturned go to fx the steam store it will give you a Minimum and a Recommended Setup and compare your PC to that.

I would recommend the 8gbs or even a Stationary PC if its for gaming.

Thanks for the help, here are my answers.

-The idea is to upgrade the ram so i can use it until i can buy a new one, so i think 8 gb its too much.

-If i were to keep it and upgrade it at max i think 8 gb may be too much and the processor isnt that
Good anyways.

-Also, upgrades are harder because it isnt as old as you may think. It has an internal battery and a single memory slot, and it has low voltage RAM so i cant switch the ram from other laptops or adding one.

-I didnt buy the PC, my grandparents gave it to me “As a gift” (Because it was trash and it was too slow for them to use Facebook)

-i do not wish to play unturned on this laptop. i may once i get a new one but not on this.

Wait, why did you make this post if you have something better? Did you want to experiment with laptops?

Those specs recommandations are outdated.

Lolno
I used to run 6 and that was painful at time. Did not even multitask much, Discord and a game mostly, sometimes spotify/webbrowser if I felt frisky.

i think 8 gb may be too much

Also, upgrades are harder because it isnt as old as you may think.

Then what are you upgrading the laptop for? Go get the rest of a full setup and have your own.

So, will changing the memory be worth it?

Sure, if you can coop some memory for like 5 bucks. Anything more than that I’d say is not worth it.

Hello JoaquinJAR, I’ve been reading the replies and I have put together a big reply with some stuff here that’s cool and good.
Since you already have a good desktop that can run Unturned, you shouldn’t really bother with this unless you require a somewhat “portable gaming experience” on the go or even at your local Whataburger.

These specs, first of all, are really old. When I say really old, I mean really damn old.
Your processor, an Intel Celeron N2830 is basically a snail compared to, say, a basic i5 7th Gen. Even an i3 at 1.7GHz would put it to shame.
Half Life 2, Portal, And GMod are all pretty well made for the potatoes and toasters out there, and even a macbook from 2010 could run those without issue. Minecraft isn’t a very good choice. My laptop provided by my high school has an Intel Pentium, and It can barely run it at 25-30 fps, even with a GPU. It’s an Intel HD Graphics 510, which is still shit but anyways…
Here’s a neat little chart to show how, well, slow it is compared to processors from around 2017. Note that this chart stops at the i7-3740, so an i9-9900k would disintegrate it immediately in a competition. 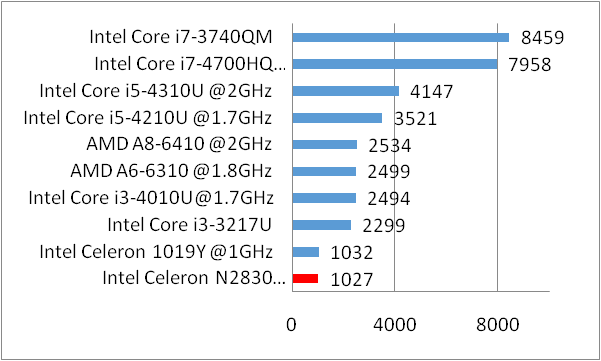 The number on the x-axis is simply a PassMark Benchmark score, a low-end CPU would be around 50-1200 in this case.
Compared to other CPUs, it falls quite short.

Your GPU is integrated, so it’s basically useless considering your processor, the age of that laptop, and the fact that it only supports DirectX11.

2GB RAM: RAM isn’t the most important aspect of gaming, as Yarrrr mentioned:

The only thing increasing RAM improves is multi tasking (Running multiple things at once). It doesn’t boost your game performance or capabilities to play intensive games but more of a slightly better web browsing experience

Couldn’t explain it better myself. It does help a lot if you constantly have multiple windows open or are using Photoshop (Only 2017 version I think)

Also true, but at this point it doesn’t matter that much anymore.
Finally, it gets down to the point where you basically have to upgrade everything. I recommend, instead of buying more RAM, just save up until you can get a whole new laptop. It’ll come with better specs (guaranteed, the EXO Smart X2-M1323 is old as hell) and you’ll get a shiny new laptop.

tl;dr
Don’t even consider upgrading your RAM, it really won’t make that much of a difference because your laptop is literally a fucking wafflemaker.

If you dont have the kind of money it requires for a High-end PC i personally would Look at what the Store is telling me so i can play what i like. I know its the easy way but if you dont have people around you who know what they are doing and you have to put your trust(and money) into a forum like this then i would recommend to keep it in mind.

No mortal pc can endure unturned

You literally can not run Unturned on those requirements. Just because a big company is telling you something doesn’t mean you shouldn’t double check it or even question it.