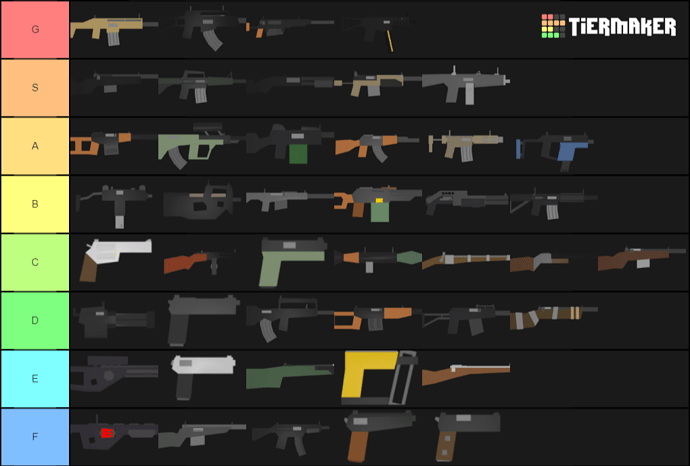 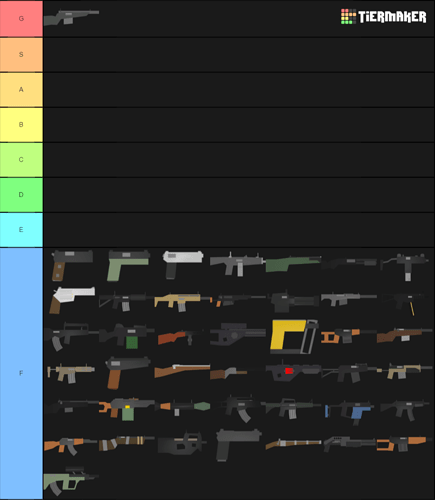 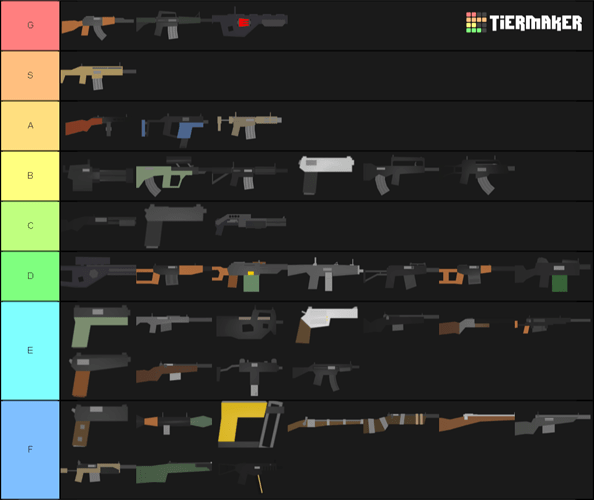 Only put the MK2 at the top cause it looks cool. 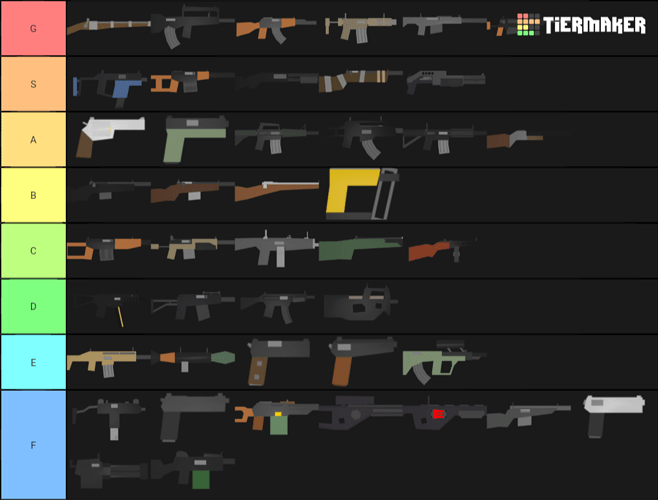 Firerate? idk thats why i like it at least 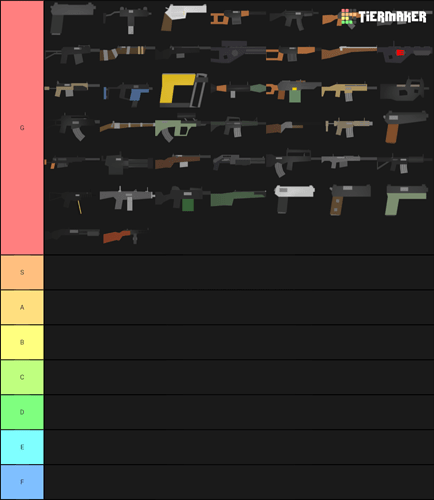 going off memory of how the guns feel (except the top, the top is just memes) 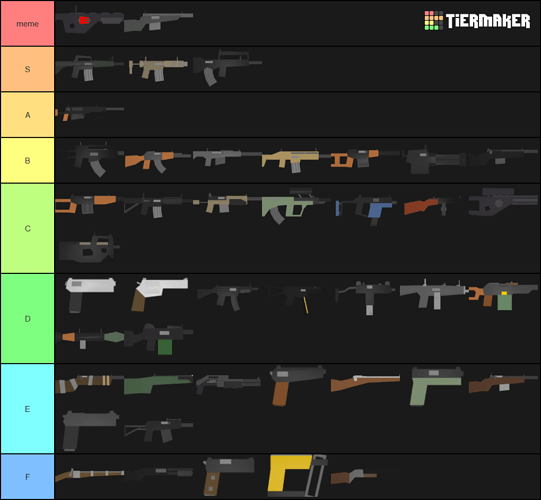 mines based on guns I like, rather than effectiveness. 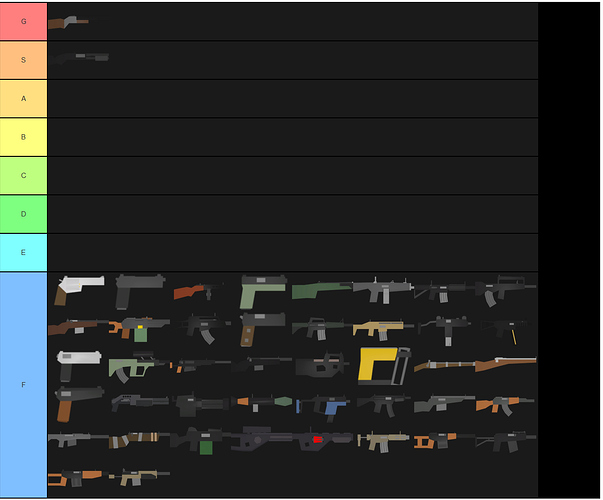 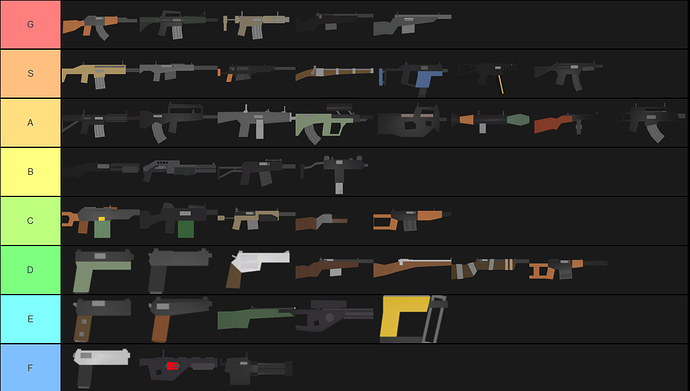 I’ve obviously placed MKII and Hell’s Fury at F tier, they’re just too powerful to get a good rating. Desert Falcon is F tier because it’s quite rare and almost the same as the Ace, which you can find commonly in gun stores.

The two basic pistols (Colt and Kryskarek) are E-tier because they just aren’t that good. Same with the Crossbow. I considering placing the Nailgun at G tier because of it’s glory. The MKI is good, but it’s pretty hard to find (iirc you can’t even get one on PEI)

On D-Tier are the more advanced pistols. Cobra and Avenger get D-tier for being higher capacity than "basic pistols) and for being generally better. Ace is basically the Desert Falcon but much more common. Hawkhound, Schofield, and Makeshift Rifle will probably be your first gun, and aren’t really that good. They are generally the guns you want to replace as soon as possible. Matamorez would have been easily S-Tier before the ballistics update.

C-Tier has both of the LMGs. While they are excellent for raiding (unless the slight raiding update changed that idk) The rarity of ammunition makes these firearms pretty “eh” all-around. The Sabertooth is probably one of the worst guns from the Washington update. The Snayperskya is almost identical to the Sabertooth. The Masterkey is generally worse than the other shotguns.

B-Tier has the Bluntforce, the Backlash, and the “Russian Auto-Shotgun that I don’t know the name of.” They’re shotguns. They have awful range, but good damage. Bulldog is probably the worst SMG.

A-Tier has a lot of things. Too many things. Eaglefire was the first gun, and is basically the Semi-Auto version of the Maplestrike. Fusilaut is basically a reskinned Eaglefire. Devil’s Bane is OP, but has awful range. Augewehr should’ve been S-Tier. Peacemaker is a good PDW. Rocket Launcher is [REDACTED]. Calling Card is a good SMG. Nightraider is pretty similar to the Augewehr, and also should’ve been S-Tier.

S-Tier - Heartbreaker is a good AR. Grizzly is a good sniper. Ekho is a re-skinned Timberwolf. I’ve never tried the Musket. Scalar is an excellent SMG. Empire and Viper are basically the same, and are great SMGs.

Thanks for reading my overly complicated explanation of the bad Tier list I made. I’m sorry. 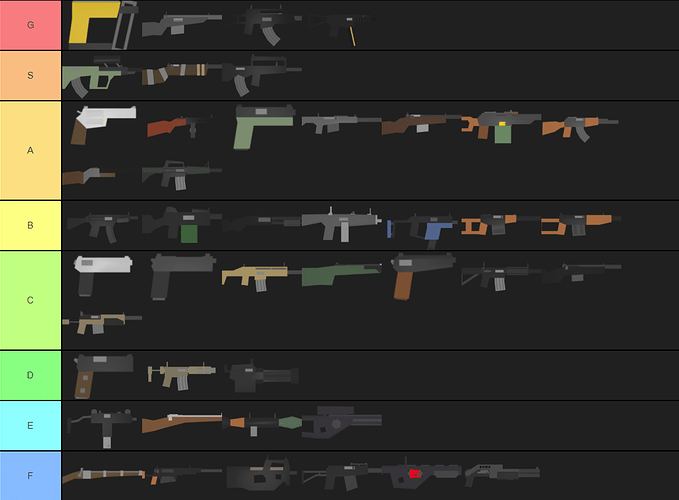 I chose the neel gun because I really like his documentaries

I chose god because I pray to him everyday

I chose the nightraider because it has a cool belgium skin 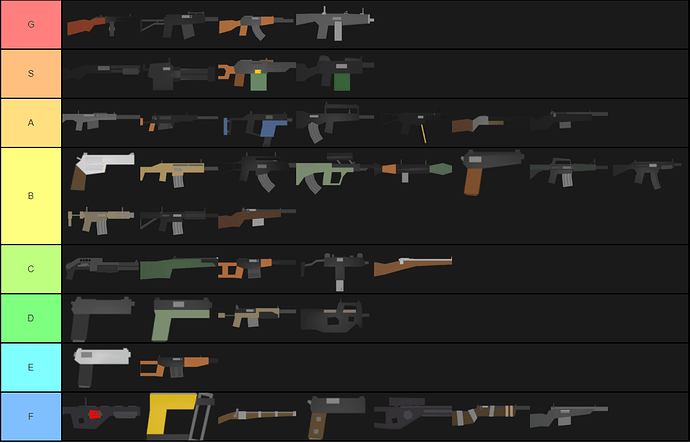 image1151×739 94.7 KB
G’s are just my favorites, i’ll use them anytime i play on a map over almost anything else
S’s are good and useful for PvP or raiding (seriously hell’s fury since the rework is beast at cqc)
A is rifles i know are great but use almost never
B’s are the weapons i find and use a lot, but more because i need to, but still like them (and the rocket launcher’s there because it’s got too much splash to trust morons with, IE, 50% of previous teammates)
C’s are the guns i’ll use if i find them, then lock them in lockers, then never touch again and eventually scrap because they’re useless (YES the matamorez is useless, it chews great sniper ammo for crap Damage output on bases, and is just a slightly better AR for pvp)
D’s are guns that hold me over until i get a C or better
E is the falcon because it uses ammo that isn’t worth it, i rather take 7 shots for a dragonfang, thanks. also the snay since it’s a worse saber, and likesuper rare on washington for no reason for how mediocre it is, and on russia i rather use the fusilaut
F Tier is meme guns, stupid guns, and the 1911, fuck the 1911. also revert the sportshot to Pre-April fool’s tier, it could one shot zombies and was usable.
1 Like
anon24515308 May 12, 2019, 11:22pm 15

Low key pissed that this template includes some curated guns, but doesn’t even have all the vanilla ones. 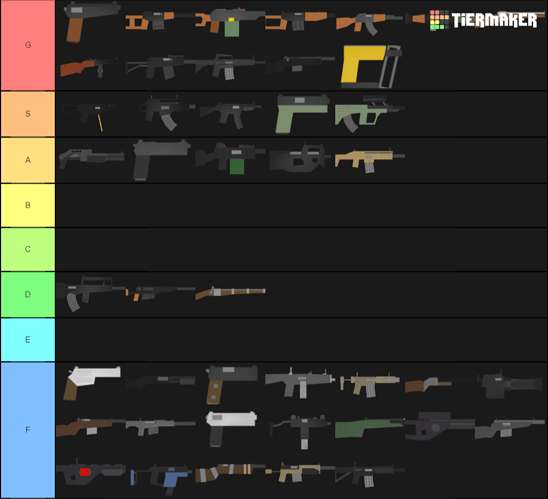 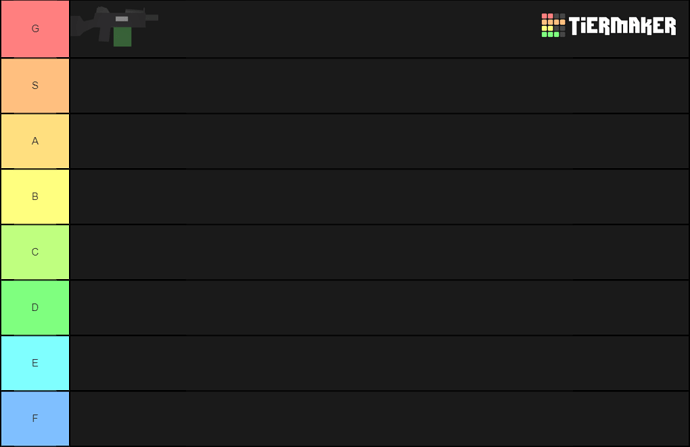 plus ure german, right? or is that someone else… hmmmm

Technically I am german, but have 100% russian blood