I think that on vehicles, you should be able to pick locks using screwdrivers, wire, etc. Maybe because there will be “locks” that go on base doors, instead of metal doors being locked all the time, there should be different tiers of locks that are easier to pick than others. For better locks, the lockpicks have a higher chance of breaking, and you’d be better at picking locks with a “lock picking” skill tree.

I think that on non player-built structures (a research facility, for example) there should be easy to pick locks on doors that lead to good loot spawns, or something. I also think there should be types of locks which have codes on them, and you could enter a code to open the door.

I’m pretty sure this is planned

There’s a joke to be made here about Skyrim, but I can’t remember it off the top of my head.

If we’re talking about picking locks of pre-existing structures that yield high tier loot on maps I am definitely in favor as long as all high tier loot isn’t locked up behind these doors.

I would not like this for player built bases however.

Also, perhaps after a certain amount of time these doors will lock themselves and respawn the loot. Requiring you to lockpick them again. 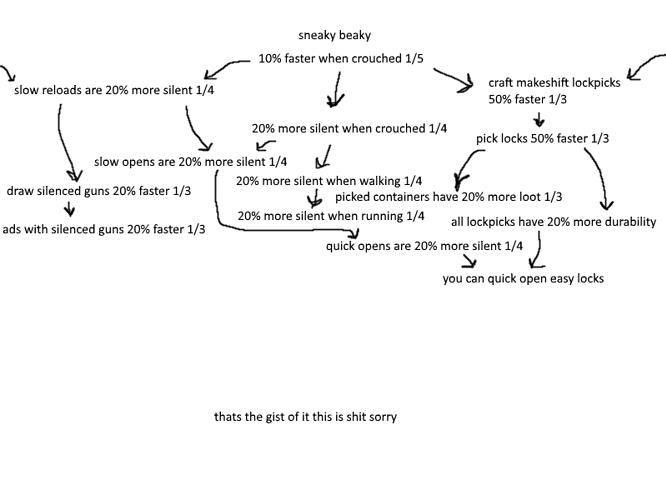 its bad but here you go

It would be a good addition to have naturally locked doors on default structures such as certain houses, sheds, barns, garages, etc.
It would give things like Demo Charges and Breach Charges a use in singleplayer.

Also, perhaps after a certain amount of time these doors will lock themselves and respawn the loot. Requiring you to lockpick them again.

What if a player tries to make a base out of a pre-existing structure ? will he have to unlock the door every time he wants to get in his base ?

If a player tries to make a base out of a high-tier loot spawn like that. They get what they deserve. In other words, yes. The door will lock itself again.

Actually, when a player claims a preexisting structure, loot spawning should stop completely, so there’s balance and a place for whatever this player wants to keep safe. Same goes with doors and basically anything inside the forementioned place: it’s all up to player’s will and capacity.

Perhaps. I’ll let you guys discuss this.
My whole view on the doors locking themselves again is so this feature doesn’t turn into “You only have to unlock this door once for the entire time the server is up.”