it is possible to lose parts of the body after a fight obviously that after dying you are reborn with the arm or the leg, this is for situations that you can not die because you have some rare or much needed item after returning to your home may die and reborn in your bed, now let’s talk about the members, if you lose an arm or a hand you can no longer use hunting rifles or rifles and machine guns since they need both hands to be manipulated, you can only use pistols, using hooks or cutlery, you can improvise a prosthesis that will allow you to use all the weapons mentioned above, but with a much larger decline, legs: if you lose, skip only on one leg or use wooden objects to improvise a prosthesis like this you will walk limping but can run, of course lose body parts will not be eternal so you die and reborn will be with everything in the right place or can do prosthesis or if you have the material nec essary you can do this to follow. REIMPLANT: If you or your partner can pick up the severed limb, they can use a needle and hospital line to reimplant the severed limb. The item may drop infrequently from medical zombies or find in hospitals after reimplantation, the limb will be broken. wait heal or use a splint to heal instantly.

This actually sounds better than the last time someone suggested losing limbs in 4.X. Not perfect, but it’s still better.

I didn’t even need to read, just…

No. No pirates. Just a lost limb, lots of bleeding, and vision will looks as if you are gonna pass out.

vision will looks as if you are gonna pass out.

could you be more specific? Every time I’ve passed out it’s gone straight from normal life to what the fuck is going on and how did I get here?

Time to inch about like a humman catapiler, minus it’s limbs.

Faint, and bleed out to death.

It should be like Fallout, where if you die you can see yourself collapsing and if it was an explosion then you can see you and your limbs flying off. I don’t know I think losing limbs should be apart of dying. Because it would be a great nuisance to just walk around without an arm or missing a leg, might as well kill myself to stop my suffering.

If you or your partner can pick up the severed limb, they can use a needle and hospital line to reimplant the severed limb. The item may drop infrequently from medical zombies or find in hospitals after reimplantation,

This doesn’t sounds right when considered that those spare limbs would’ve been outside for months without any type of preservation. But I didn’t know about surgery nor preserving limbs to dispute it.

Can’t belive you guys are actually considering this…

You wouldn’t just have to stitch skin, (which is a skill that most survivors would be somewhat capable of) but also reconnect arteries, veins, nerves, tendons, and bones (which would be a somewhat more difficult proposition to say the least.)

It’s better to suggested on why it’s sucks rather than saying that it sucks dierectly. That way, he might be able to improves his suggestions in the future. I hope.

Yeah but I doubt that it would happen.

It overcomplicates medical aspects (assuming these will be much more accurate in UII) and can difficult gameplay up to a breaking point. If we’re talking about dismemberment on zombies and the turned, alright, I might take it, but if we talk about it applied on players it’s a big mess up, since this treats about losing limbs while still alive, which wouldn’t be just very graphic but also really punishing on gameplay for anyone unlucky enough to lose their hand or foot. Also, why losing limbs that you could barely replace with inert materials like IRL if you can respawn in one piece? That’s why there’s no survival game with that mechanic; it’s useless in the long run.

Maybe it could be balanced if we just apply dismemberment on dead ragdolls, when dying by explosions or anything that can make you lose your limbs, but even the sole idea of arms, legs and heads flying around in a game like Unturned is a really sensitive topic.

TL; DR: realism for the sake of realism…

Also, why losing limbs that you could barely replace with inert materials like IRL if you can respawn in one piece?

If you had a problem with that reasoning you can say it, but don’t pretend the reason hasn’t been stated. 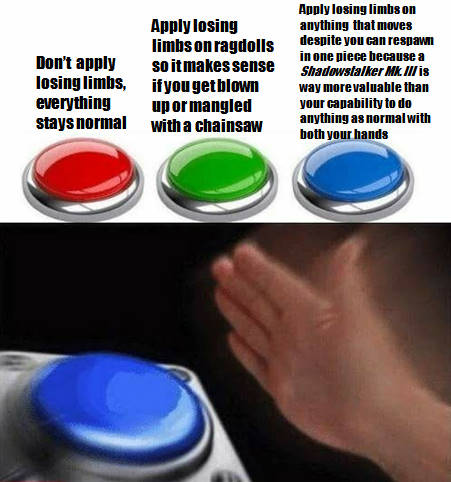 Using bandages to stop a bleed, use vaccines and consume antibiotics to stop an infection, you can tell me ‘’ an artery has been broken, a simple bandage will not solve ‘’, but as you said: this is still a videogame, which still should keep little of its foolishness and simplicity.

In addition to what?

The reason stated was not for the sake of realism or for long term survival, but just to get be able to struggle back to base before dying

Might I point out that you have repeatedly used wacky 3.0 mechanics as arguments against immersion in 4.0?

The two are not comparable in that manner, since we all know Nelson is going for a more hardcore survival-centric style of gameplay. There is a balance to be found, and I believe this suggestion goes against it by overcomplicating the medical system in an unrealistic way.

In addition to what?

In addition to my previous comment and my meme on which I satirically express how illogical this suggestion is.

The reason stated was not for the sake of realism or for long term survival, but just to get be able to struggle back to base before dying

If this is applied, even if these people make it back to their bases and save their lives, they will most probably suicide anyway to respawn with all their limbs on, because c’mon, who in the earth would want to keep playing the game with such reduced capabilities?

Also what I said above and what GreatHeroJ said… So what does make this actually so substantial to include in Unturned II?