A continuation off of my previous post which can be found here:

Mega zombies are some of the most powerful enemies you will ever encounter in Unturned. Their faster movement speed (vs players), high health, high damage, and ability to throw rocks at players make these fierce opponents in battle if you are not properly prepared. In Unturned II, I believe we can improve upon these zombies even further, for instance Ability to throw objects instead of just rocks (Trashcans, small cars, or maybe even other zombies?) Ability to throw players around? Abi…

The basic points are that Mega zombies should be able to do the following:

However, I want to expand even more upon the topic; and really make Megas a fierce foe.

Throwing boulders just isn’t enough in today’s post apocalyptic world, you have survivors armed with RPGs and LMGS and you are still stuck with rocks? Well fear not, for you would now be able to throw other miscellanous objects at the player and the range that you throw them would depend on their weight.

Megas could even use their fellow Turned friends as projectiles and launch them at players in cover, preventing camping.

Perhaps if you’re in a car, the mega will throw it to try and kill you instead of just smashing it.

This would also be a nice addition, but should be restricted to just cars, and nothing larger.

A bit like throwing objects, but it just means that if a Mega is close enough to take a swipe at you, it could have a low chance to grab you and throw you in a random direction. This could me that it could smash you right into the ground or throw you 10 feet away.

This attack would clearly be pretty brutal, most likely killing unequipped players instantly, so make sure you are fully prepared.

Essentially meaning a Mega could grab a nearby lamp post and start swinging like a louisville slugger while dealing increased damage with longer windups and overall slower attack speed; instead of their quicker basic hands.

The chance for a mega to grab one would be low when starting a fight, and would also be low when it spawns, but it increases it’s chance to grab an item as it’s health deteriorates. 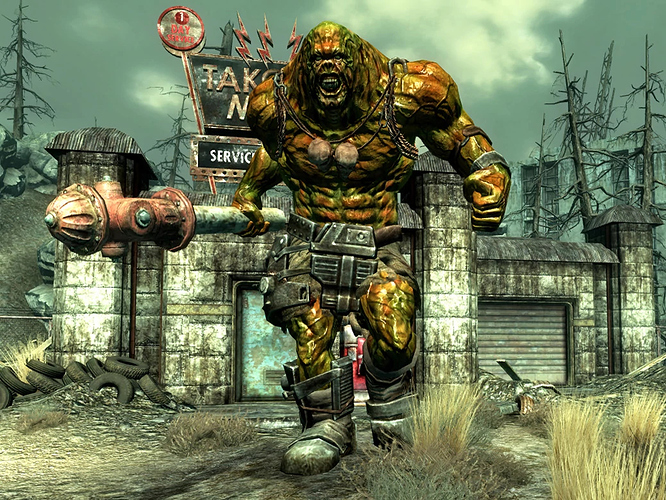 Self-explanatory, I believe around 150-200 5.56 bullets should cover it’s basic protection, but it should also be noted that

Megas should be immune to stuns.

and should also have an exposed backbone which deals increased damage when shot.

Megas should be more territorial instead of the more offensive Turned. The reason being that a player does not have to engage a Mega and could run away from a Mega if they are nimble and fast enough.

The ground should shudder as it walks around, so a player is able to pick up that a Mega is located nearby.

However, I don’t know if Megas should still drop the same amount and rarity of items, as it does now, hopefully a resolution appears.

a random direction. This could me that it could smash you right into the ground or throw you 10 feet away.

Megas shouldnt drop good loot, instead they should be the ones protecting the good loot. You should be forced to fight a mega before getting good loot instead of being able to just sneak around them like in 3.0 Also it would be fun to see megas picking up other zombies and throwing them at you, and then the zombie they threw is crippled but still wants to eat you.