I have made this for show you the variety there is for make weapons in this game,
stuffs like the backpart of the pitchfork for make a makeshift gun butt etc. I was testing uploading theese images in the artwork community and the people likes the idea about makeshift weapons

[one of the most popular was flamethrower.]

i like this idea because if you are on an island and do not spawn knives, just craft this. 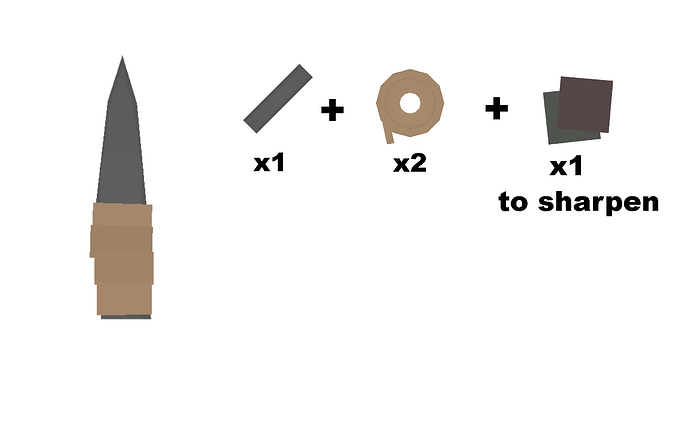 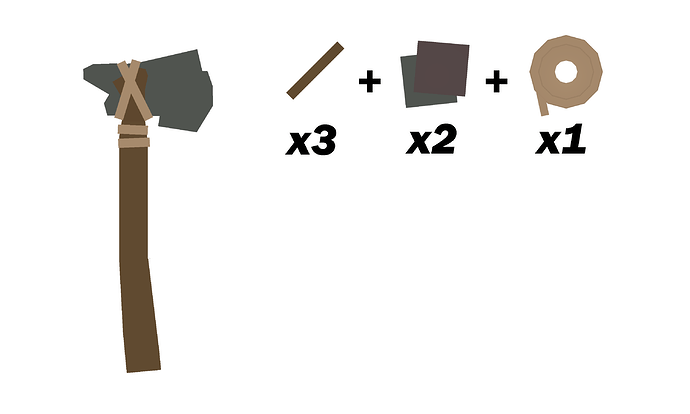 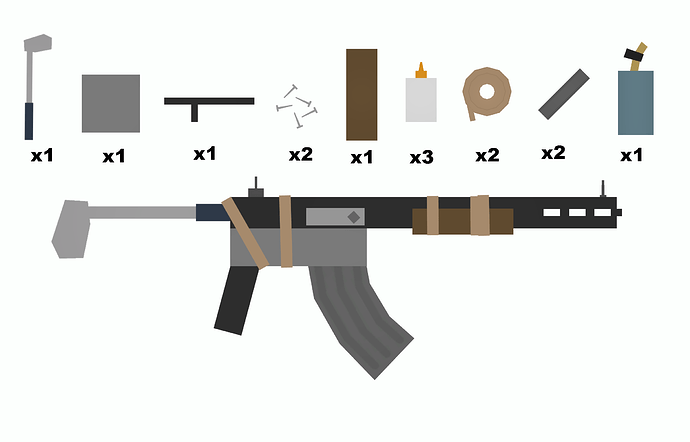 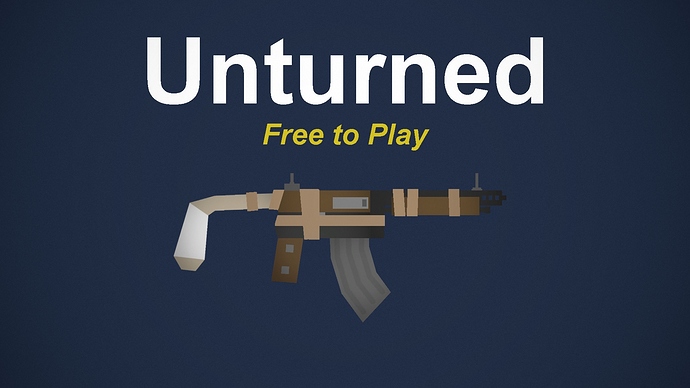 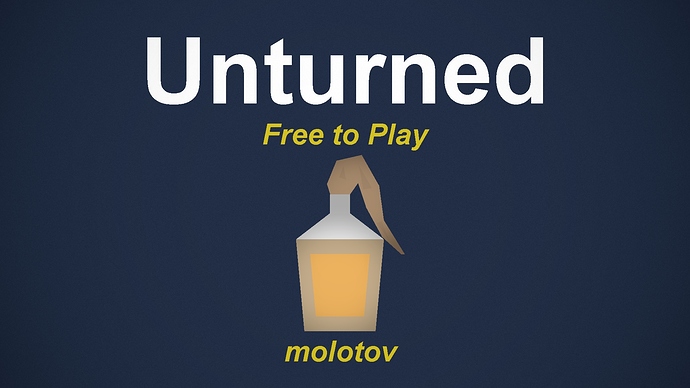 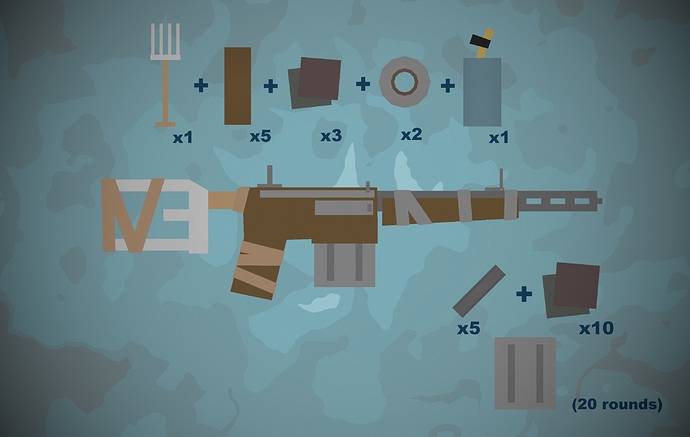 i do not know wtf i did 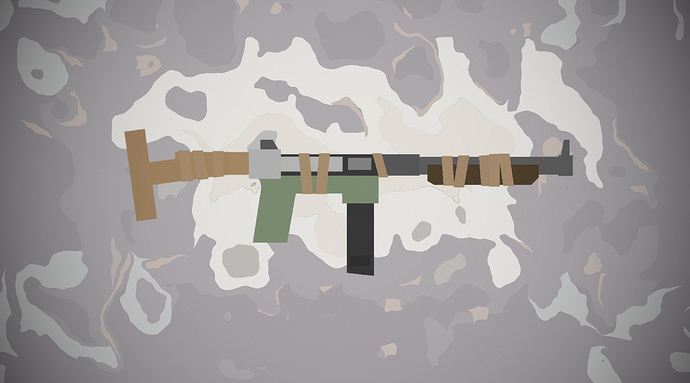 (i know is missing blowtorch in recipe) 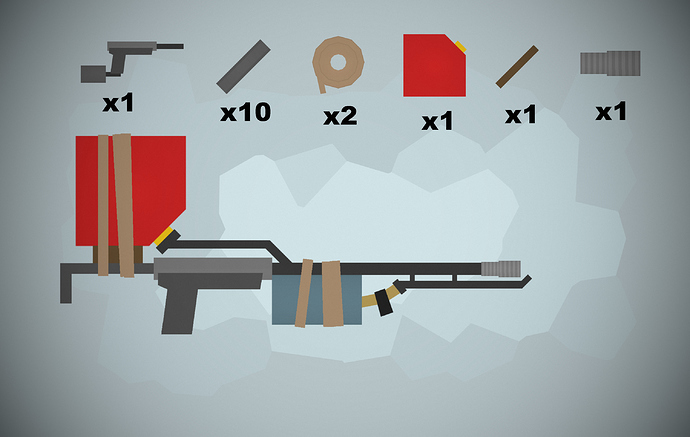 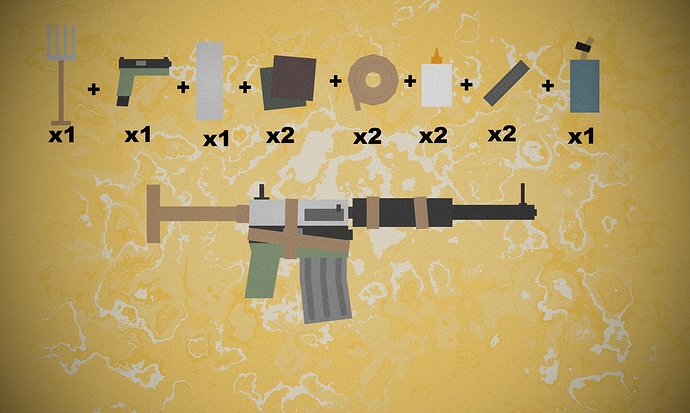 You’re just taking random items and placing them, making it look like a gun without them even making sense.how do you make a gun out of hockey stick and baton and a few wood and metal lol

You’re just taking random items and placing them, making it look like a gun without them even making sense.how do you make a gun out of hockey stick and baton and a few wood and metal lol

those are concepts man, dont hit me

and unturned has no sense >:c

Tfw you turn an entire gun into the grip of a makeshift gun.

I like the knife, axe and molotov.
However the rest seems a lot over the top imo

I like the concepts, but the recipes used to craft them are a little weird. Some don’t really make much sence (Yes, i know some things in Unturned don’t make sence). I think these weapons could be added, but with better crafting recipes. Other than that i really like the sprites you made for these weapons.

TFW? this is not rust dude it’s unturned

TFW? this is not rust dude it’s unturned

Rusturned? Rust doesn’t really go this ham on the makeshift stuff though. I’d prefer Rust’s stuff for the most part.

NICE. I really like
hand weapons (makeshift) are often found in apocalyptic environments
I would say that the bow with the arrows is most often used.

Improvised longbows are already in 3.0 and I’m pretty sure they’ll make a return in 4.0.

some of these guns really look cool, and some have already made their way into he workshop, but i agree some are a little far-fetched. how do you make a baton into a gun? its impossible.

otherwise some other things are really cool. the pitchfork gun looks awesome, but im pretty sure the pointy ends would stab into the dude.

still pretty alive steam-side. Quite a few works inspired by this

Hey there, Im a concept artist aswell. May i know your discord id? or if you have one? Or better, Add me

It’s been 8 months, I don’t think that guy is even active anymore.

Use a Semi Gun to make an Auto Gun. Logic