Glad to see you all again. It has been a long while since I have posted anything to the forums, so long infact that I've lost my regular rank to it. This was never about maintaining a rank however, only about providing the best ideas I can to the development of a new game. So without hesitation lets get right into it.

Looking back on the previous iteration of Unturned (3.x) here is what I've gathered from the progression and pacing of the game via playing it myself.

What I hope to accomplish

The goal is to fix the progression and pacing in 4.x so that its not as fast to get to the endgame by rushing Olympia/Summerside and provide the players with more things to do in downtime (Or actually want to utilize downtime rather than rushing everything).


Obviously this will not prevent RUSH B CYKA meta entirely, however there will be benefits to slowing down.
The goal is to fix progression, but I will settle for just being able to slow it just a little.

Here we go, my pitches for additions to be added in for 4.x.
Some of these have been recommended by other forum users, I will accredit them appropriately. Apologies in advance if I miss anyone.

This has been on the Trello I'm pretty sure, has also been brought up by @Harvest
I feel that the implementation of workstations in 4.x will be very important for the game's pacing, therefore it must be done right.

Hopefully when these stations are put into the game it will remove the restrictions put on crafting by the Crafting Skillset, providing more freedom to the players to craft what they need without having to rely on an expensive skill. 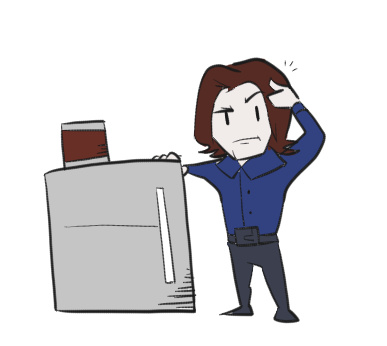 An obstacle brought up by the Trello, on the reddit and by a few users on the forums.

GreatHeroJ does an excellent job with creating a system for food spoilage, there isn’t actually anything I would change about it. I shall post it here for reference for those that would like to view it. 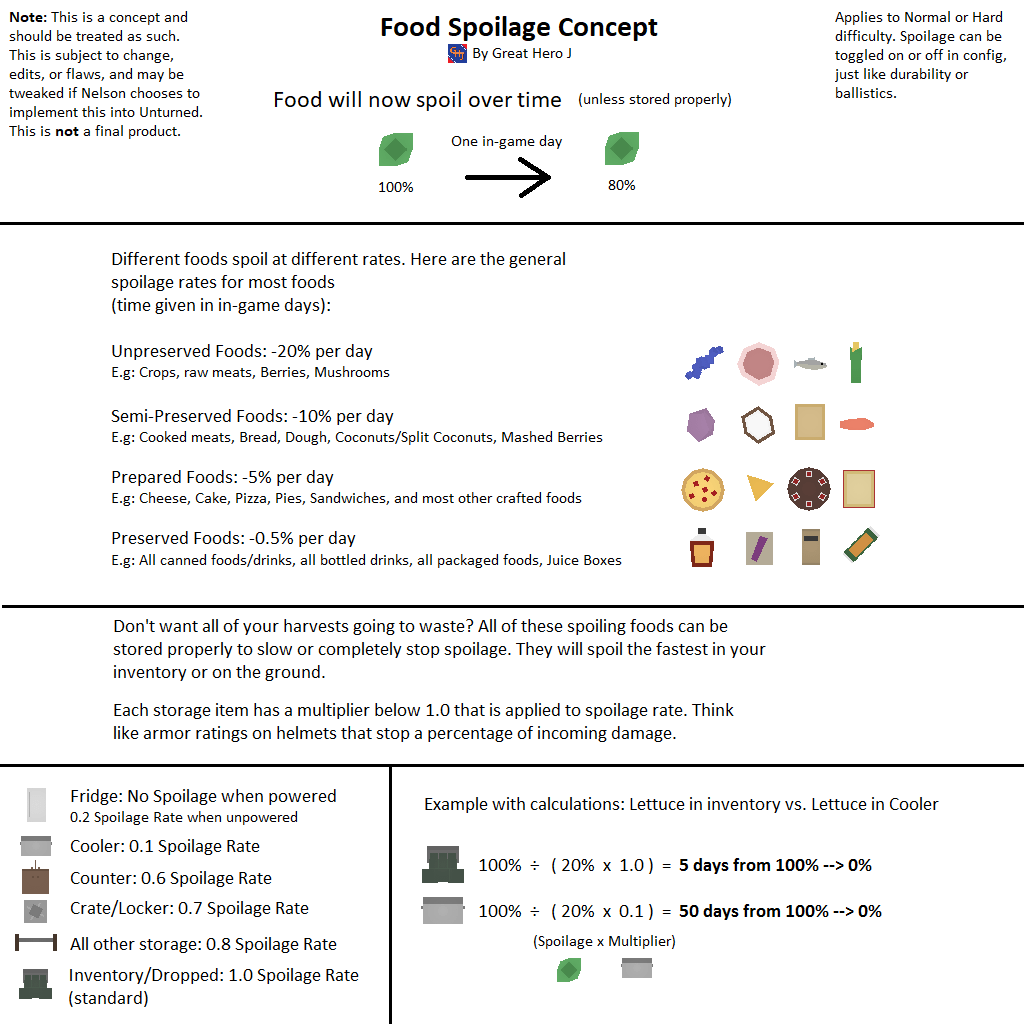 Only thing I hope for this system is for all foods and consumable to spawn above 50%, so you don’t just run around finding nothing but rotten potatoes or moldy bottles of soda.

That is all I have to say.
As usual keep comments and replies in the thread constructive and I hope to see you all in 4.x
Peace homies.

All raiders/hostile NPCs will only be able to use sharpshooter rifles (Sabertooth, Snayperska)

I agreed with everything but this. NPCs should be able to use any firearm in the game, but the map would decide this through the level editor. I don’t think it would hurt to give them some more options (patrol nodes for one).

Another AI enemy we ought to get are Turrets. They’d be found in deadzones and would shoot any player on sight. After being destroyed, they’d respawn after a fairly long while.

I just don’t want to see nykorev and hellsfury raiders alright?
I would like to limit them to semi-auto weapons

Instead of a gunsmithing station, I’d suggest something like a tinkerers station used for crafting locks, components/attachments for guns, clocks, and such.

NPCs should be able to use any firearm in the game

Dude, not just any, unless you want to make raider bosses handling a Hell’s Fury, LOL.

Fire-rate and Accuracy will be decreased to ensure you don’t get gunned down with nothing but headshots.

About how are they going to shoot you down, these should be configured so that they aim mostly to the torso, just like turrets do (but with far less accuracy), and shoot via short bursts if using automatics.

I’m telling this cuz’ some NPC’s are way too easy to take down, and others are amazingly dumb, causing that they can’t kill to each other effectively but against players they have 500% accuracy (not a reference to Insurgency bots, LOL).

A BOT’s aim can’t be like a human. They instantly snap to the target, but the developers add a little extra wobbly movement to their crosshairs to make them miss their shots.

only be able to use sharpshooter rifles

I believe they can use pistols, SMGs, ARs, and DMRs to add a little bit of variety because having them use DMRs and have bad aim will simply be free loot for players.

Oh and btw, I also made a post on Reddit, Steam, and the forums regarding the food rottening awhile ago (Sep '17) in case you missed it

Rotten Food and Drinks U4 Discussion

I’ve mentioned this before and I’ve seen it in the trello. But I would like to elaborate about how it’s gonna function and you guys comment your thoughts. Let’s take the example of… bread. Simple and common. It’s at 100% quality. As long as the bread is in your inventory, the bread will start losing it’s quality bit by bit. Nothing too crazy, it can be -1% every 30 minutes or it can be every 10 minutes… your choice. When you right click on the bread in your inventory or hover your mouse over…

You are right on the Turn-caps.
Also I did mention you in the thread, some of the @'s are broken for some reason.

You reach this tier when you have amassed so many raid-tools you just destroy anyone before they can climb their way to power. The true endgame.

The problem I have with this progression is it assumes that the point of the game is for one or two guys to ‘dominate’ a server by crushing all human players in the way and eliminating any potential rivals before they become too powerful. This is a roadmap to 3.x redo and I find it boring (having been a zerg player myself). As good was 3.x it needs to grow past it’s simplistic degeneration. For me Unturned is, in essence, a sandbox role play game set in a zombie apocalypse with survival in general at its core. The progression you have described will lead to, at best, a dark age that could last a thousand years and, potentially, lead to the end of humanity. It will certainly lead to a 4.x that bombs out fast.

The way humans have survived, to date, has been to band together and cooperate…not the mindless xenophobia and endless consumption that our modern society seems to have bred into our species. Originally, Romero’s zombies represented the self-destructive nature of this xenophobic / consumerist society and the few survivors the last of the independent thinkers banding together to prevent annihilation. Yes, there is a philosophy to the modern zombie genre. That’s why zombies go after anything living. That’s why they stop eating when you die. It would be ironic indeed if the progression of Unturned 4.x became the antithesis of what we all love (knowingly or not) of the modern zombie genre.

I think Nelson, with 4.x, has to decide what Unturned is about finally if the game has a shot. I think whatever the progression is it should start off slow, take on a will of its own in each server, and eventually end with an open ended, stable community, or communities struggling to survive the new realty of an ever present zombie horde while prevent self-annihilation through human stupidity. This could be a great game that attempts to answer the question: Does humanity deserve to survive its own impending downfall? THAT would be an epic game and one worth overlooking the limited polish of the series to date. I could be way off…but for the sake of the game I hope we can move past 3.x. Consider a stepping stone to something bigger and better. If successful that’s what 4.x will become itself. A stepping stone to something better.

This is a roadmap to 3.x redo and I find it boring

Now don’t get too offended, I am having a little bit of fun with these descriptions but anyone who has played Unturned knows what I am getting at. Wink wink nudge nudge.

I like your philosophy, but it was a lot of mumbo jumbo to read.
That is infact how humans would react in an apocalyse situation… you know

If it wasn’t a videogame.

just wanted to point out one thing.
this entire section?

How about we don’t include the Hell’s Fury in 4.0?

I like this concept, just please no crafting times.

Also, it whould be nice in some high end areas autonomous drones and sentrys might be about at bases/labs as a obstacle to overcome, like a map location might be area 51 and some inner chambers might have these terrors kepoint about or a sentry on top a tower in the military base peppering both zombie and player alike.

Also I think these should be developed first (in npc category) so nelson can test A.I and not face massive discrimination, since robo A.I has lower expectations in what and how they do things than bandits tossing grenades and taking cover.

Also thanks Whistleblower lmao
I think I will actually just remove the NPC section of the thread then to prevent people from looking it over more. I wish I would’ve known.

I am not so sure about that. The people we are while under anonymity (no consequences for what we do) is who we really are. That is the thing we will degenrate to when law fails and society falls apart. Study the dark ages in Europe. It took 1000 years to get back to feudal civilization.

No one takes you seriously when your post contains ‘autonomous drones’