Hello! Today we’ll be taking a dive into the scary world of Quicktime Events, or QTEs. QTEs are a rather controversial topic, a lot of people hate them, me included. However, when done right QTEs can make menial tasks more engaging, and prevent burnout when doing said menial tasks.

For the ten people on this earth that don’t know what a QTE is, and QTE is a sequence in which a player is required to do actions within a short timed manor. Messing up a QTE can be as simple as death or just taking damage.

There have already been a few topics covering QTEs in Unturned II, I’ll quickly summarize some of their points now. 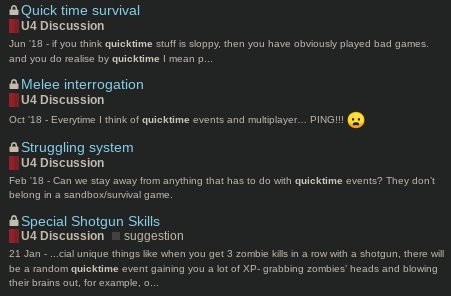 This thread is rather simple, just a bunch of bullet points on possible QTE’s.

Press button(s) to get extra XP when killing turned.

There’s a ton of opportunity to throw in QTEs, hell you could even make walking bound to QTEs through modding if not officially supported (Please don’t). Personally, I think quick time events could include.

Menial Tasks are where most of the more interesting QTE’s reside. QTE’s for foraging especially. Some games, like Fortnite, throw in weak points on resources to keep players engaged when farming resources. QTE’s for things like picking berries is ridiculous though. QTE’s during crafting could serve to speed up the process. If metalworking was a mechanic QTE’s could allow the player to cool newly poured ingots faster.

Certain QTEs, like the ones discussed for Harvesting resources, are a must, others are much less desirable. Server Owners and mapmakers should be able to disable/enable these events if desired. I would prefer not to have QTE’s in-game unless they can spice up the more mind-numbing parts of the game.

Why make this thread then?

From reading some of the aforementioned threads, the reception to the idea of QTE’s is less than positive. So then why would I make this thread? This topic hasn’t properly been covered on the Forums and given its thread, and I thought I might as well try to get a more conclusive answer since several people would probably like QTE’s in some form.

It’s that part of the Thread, the Poll Zone! If you don’t want to formulate a comment, but still leave your mark, feel free to vote below!

If you voted on the poll above please consider voting on this poll as well.

Thanks for sticking around to the end! This was a rather short thread, and I hope I covered the basics. I’ll be sure to expand on this thread as I continue to think things up and receive feedback from all of you! Remember, this thread primarily serves to start a discussion about QTEs, not necessarily the content of the post.

I voted for the first option in the former poll not because I think qtes would be the ideal minigame for any activity, but because I can’t honestly say they couldn’t possibly be better than nothing.

I like the idea of having these events in the game, just do not abuse them, as they can make the game very annoying and little fluid.

When referring to “quicktime events” people seem to be referring to some full-on epic Mortal Kombat cutscene shit, and then everyone’s like “but that could restrict gameplay and you might be vulnerable to getting shot!!!”

like no, it can be implemented so it’s actually in the game and you’d be free to do whatever. In my shotgun post I was simply referring to different moves and stuff, and in the button combination thing it would be in the actual game, not some mini cutscene type thing where you’re forced to do the button combination.

I remember playing games where quick-time events were used with guns. With some of them, tapping a key at the right time would speed up reloads. Another game I played more recently had it so you could rapidly fire a shotgun by hitting a certain key to pump it quicker right after a shot.