Subdividing inventory slots in U2

One thing that gets on my mind when using the inventory in 3.0 is how all small items are the same size, and that very tiny items take up the same space as moderatly small items. Another example is how things like an arrow takes up the same amount of volume as a suppresor or a roll of tape taking up as much as a rope that I assume is moderatly long and chonky. 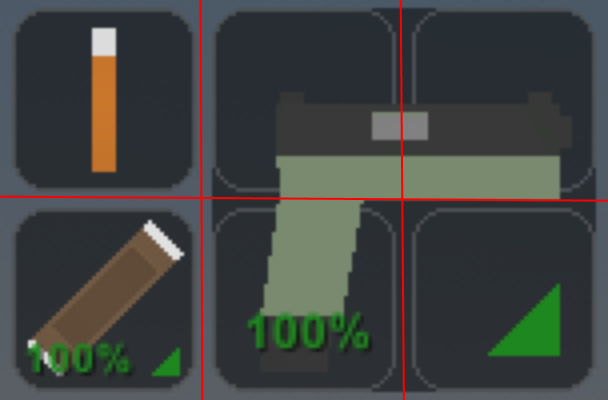 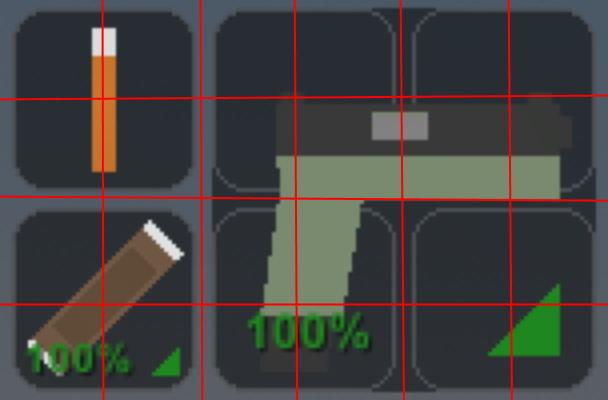 This illustration does not show what I mean exactly, let me explain.
This way you could make suitible items be able to take up very little space like for example: seeds, certain meds, money, and so many originally 1 slot items. Long items could also be “thiner”, maybe like a rifle being 5 “3.0” sized slots long and 1.5 “3.0” sized slots in height or potentially in “4.0” things like keys or notes could be 0.5x0.5 “3.0” slots? Basically this suggestion is targeted towards smaller items that doesn’t have the inventory “resolution” to represent it’s size and thus it wastes space that would realisticly be free.

Certain small items that count as resources could be stackable like ammo of course (I’m not insane).

Buuuut, disadvantages, advantages and fixes for disadvantages: Alongside more in-depth inventory management it will be harder to move a large amount of items easily, I think a method to combat this is to be able to box select and move larger amount of items which I believe should be implementable in this early state of development. Think of it like taking a handful of items in your hands and moving it to a container perhaps? And don’t get me wrong this is not supposed to be a “realism for the sake of realism” thing. Some items are simply bigger than they should be compared to other 1 slot items and other items are on the edge of being 2x2 or 1x2 insted of 1x1. These could be 1.5x1.5 “3.0” slots instead thus giving a neat in-between! Another good example is a flare could be 1.5x0.5 “3.0” slots big, it would represent it’s lenght better and be sligtly easier to carry (or maybe 1.5x1 “3.0” slots?).

Thank you for reading my post, tell me what you think!

Some things to preface before I get into feedback:

With that out of the way, I don’t know how I feel with further subdividing the inventory system. The current inventory grid resolution works fine at the moment, and when you shrink it, it becomes a lot more complicated (and often, less user-friendly as a result, as items become harder to align and precisely micromanage). I think it is for this reason that even games such as Escape From Tarkov which are considered hyper-realistic avoid making grid resolution any smaller - an unmodified assault rifle in EFT is usually 2 spaces wide, similarly to U3 and UII.

I understand the intention of this suggestion and it would be more realistic, but I ultimately feel like it’s a bit much from a quality-of-life standpoint.

I understand it might be too micro managey, I don’t think this is a 100% needed thing either but it would be nice whit some kind of way to store inconsiderably small items without losing as much space as something that is supposed to be bigger. 4.0 would definitly go along fine without it but I think it could be an interresting change if done correctly even if it’s unlikely to be adapted into the game.

I think the stacking of items will fix most of what you want from this post. I personally hope to see things like logs, tape, glue, and arrows stack in U2 but just weigh you down.

@GreatHeroJ
Alright, thanks for letting us know.

That kinda defeats the purpose of inventory slots in general if large amount of building materials aka logs can be carried without much space being needed. It will weigh you down, true. But I believe stacking will be reserved for smaller resources. And that is also assuming 4.0 will have the same system regarding log gathering and I’d say the same thing for scrap metal.

True it does not make sense but It also doesn’t make sense you can fit fuel pump in your backpack.I was thinking building materials would be stack-able for convenience sake, with the new addition of the weight system I think stacking items like this could make work.

My idea comes from Sectionalized Clothing - w/ Concept Art where clothes wouldn’t have the space to carry long things like rifles and for the matter at hand not many logs. Where a backpack would be the place to store these things. Nelson liked this idea and commented on it which doesn’t mean it will word for word what the post said but he likes the idea.

If something like this would be the case collecting logs would be even more tedious from 3.0 and I think Nelson wants to move away from a tedious crafting/building/collecting system and the stack-able items like crafting materials could aid in this.

Like the post suggested, clothes wouldn’t have the space to carry things like logs or maybe 1 or 2. So going from that stacking could work. Also logs don’t have to be 2x1 in the inventory but could be something like 4x1 and really it would only fit in the backpack, but stack-able under weight.