Issues with the current system of U3

Now, before I show you what I’m suggesting, I’m going to paint a picture of the current situation regarding inventory in 3.0, namely its main caveats and issues. In theory I will also provide ways that I aim to fix these issues with sectionalized clothing in 4.0. If Nelson is up to the task of coding this, it would be a massive step in the direction of realism that all of us have been aiming for. Without further ado, here we go:

In 3.0, inventory has some huge problems:

So, if you’ve played 3.0 for a while, which I assume you have, you can probably relate with at least one of the above problems. How do I suggest we fix this? Introducing…sectionalized clothing! 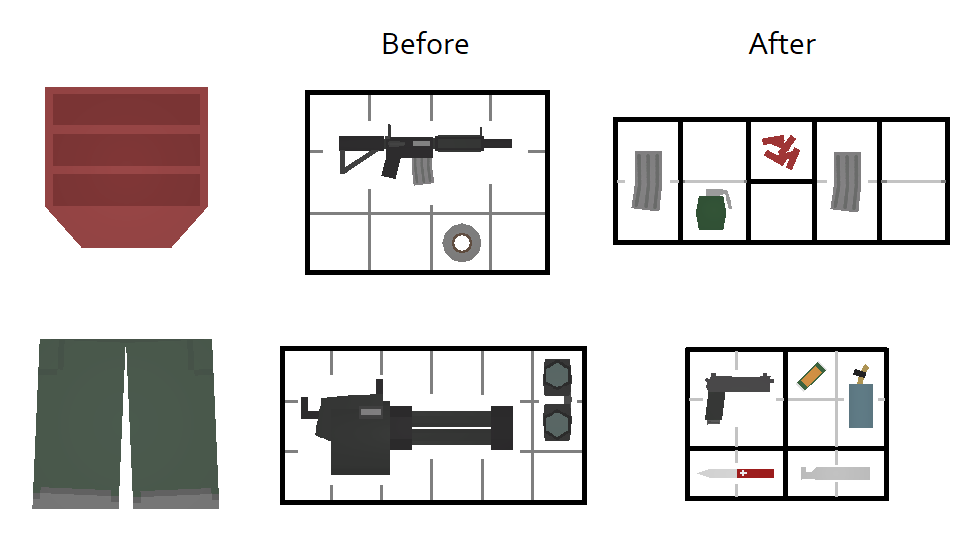 Inspired by the inventory system of Escape From Tarkov, this intuitive system solves virtually every existing problem with the current inventory system, while at the same time being compatible with parts of the old system, as well as both grid space and weight systems.

Congrats! You made it to the end.

I’m interested in seeing your feedback for this. Thanks for reading!

56 Likes
Armor, Vests, Modularity and Capacity
Vest overhaul
How much time do you spend on making a post/topic
Unturned II Inventory System
Equipment
Where to draw the line of realism and fiction
Unturned II Inventory System
Quick Slots
Limited Stats When Spawned
A little topic that peaked my interest
Features from other game that would fit in 4.X
Subdividing inventory slots in U2
Suggestions about inventory size and items
Subdividing inventory slots in U2
Balancing trunk storage in 4.0
Way to keep people from putting their Important loot inside their inventory when they log off
Metabolism Overhaul - A (meh) Suggestion
NeedlessMemeing March 27, 2018, 8:12pm #2

It makes sense and pretty much teaches people the lesson of not hoarding in their pockets making it ridiculous.

But it also gives people the given priority of having to nail down on making a base or temporary settlement.

This is exactly like escape from tarkovs system, which is really nice and would be a great addition, but people might get triggered for copying (I’m not). Also, in your drawing I think you should highlight the boundaries.

This will be great as long as it is balanced to not be tedious. Good post!

This is amazing Nelson should add this to Unturned 4.0 100%

A good way to balance hoarding. I like it.

One thing to note that there would be more grids than the current game, but other that this would be a nice thing to have

I’m kind of against this idea; with item stacking we’ll be able to carry more in clothing we wouldn’t be able to fit guns in, so it seems a bit redundant. The idea would complicate inventory management, without adding much benefit, IMO.

-Guy pulls out an auto shotty from his pants
Sorry, not anymore.

tl;dr: fuck it, unturned is already going the EFT route with its inventory, why not go balls deep?

Well, thing is, this system in EFT actually works in tandem with weight. So if you’re concerned about balancing stack hoarding, weight will solve anything over the top.

I’m not worried about balancing stacked items, I trust that measures would be taken, but splitting the inventory up by article of clothing, and then splitting each article of clothing into a half dozen oddly shaped pockets doesn’t seem to offer much benefit, but has the obvious draw backs of making inventory management a pain. I don’t necessarily think the inventory should be as simple as possible, but any added complexity should add atleast as much as it detracts from the game.

It really isn’t a pain. Not all clothing will have pockets like this (in eft’s case) only the chest carrier has these pockets. It is kind of like your quik slot suggestion.

Again, while you are somewhat correct, bear in mind that this is just a concept. If Nelson sees this and takes heed of it, things will probably be altered. I just have the storage the way it is in the concept art just to illustrate a point, and I honestly doubt things will get too ridiculous (like having to search individual pockets on the clothing of a dead body in order to loot it, cough cough EFT).

I appreciate and understand the concern though.

I’ve seen a bunch if suggestions regarding ths topic, but you take the cake. Well-organized and logical.

And yeah, we can all agree that EFT’s inventory system is very realistic and balanced at the same time, not allowing people to stuff guns like rice in a turkey. I believe you forgot about the stacking ability so you won’t have to put 8 shotgun shells in each slot only.
Here’s a balancing detail that I would like to add. Only backpacks have the 6x2 space to fit a Grizz or a Timber. And only the Ruksack has the 6x3 (Minigun) empty space, so that if (by any chance), you found a minigun, not anyone would be able to pick it up and store it. Same with snipers on non-military backpacks

I think this post is one of the most liked

It is kind of like your quik slot suggestion.

It is kind of like my suggestion, but in my suggestion it worked with quickslots and the holstering system mentioned in Devlog 6 (and I sort of bundled it with a crafting/attachments idea, but that isn’t and wasn’t really related) while this suggestion is just breaking up the inventory to make carrying somethings less convenient. I don’t think this suggestion would be game breaking, but I feel like it’s a little too basic, and no one is actually added much to the idea in the comments (not that what was in my suggestion is necessarily what is needed)