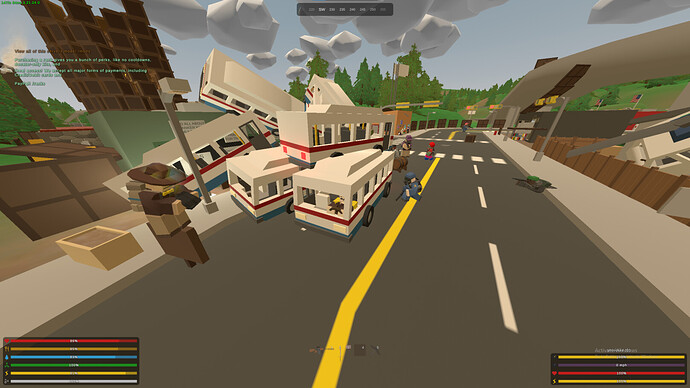 1618×910 261 KB
Start off with a bank. Some kid takes it over, calls it his gun shop. I enter the building, go behind the counter, and start offering to sell guns as if I were the owner. Players start to prefer my way, and I start “claiming” ownership of the bank by putting a metal placard over his with “Rain’s Anarchist Free Gun Shop” as the title.

I sell some guns, some 1522’s, and some other things. But the kid is still pissed and tried to take over the shop violently, and gets his ass beat over and over again. At this point, another group called the Generic Purple Pizza Company contacts me, and I give them the permission to put “advertisements” on “my” shops windows. So the one-way windows are now blasted with a bunch of metal placards. The kid calls it griefing, I call it business!

Anyway, I rally the ten or so players around me to spawn bus’s ontop of the front door to prevent the kid from entering or leaving and the crowd follows suit. Not longer after, some random french guy starts to furiously build plates upwards, creating a staircase. But he doesn’t just end there… (this sounds familiar, doesn’t it?)

So he keeps building and building. 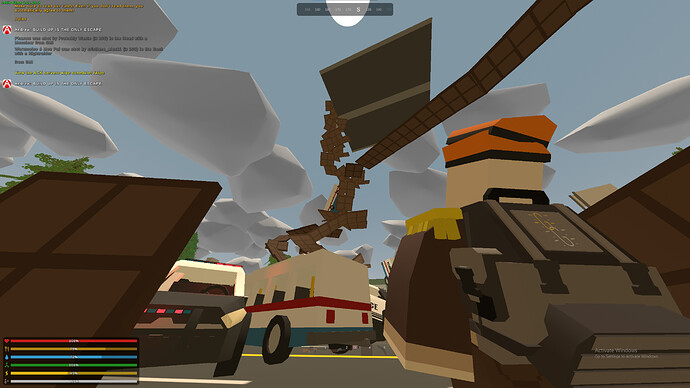 A short while up, someone starts a shop on the platform, contracting IP PNC to construct the shop for them.

At this point, the bridge is starting to really look like its getting somewhere! 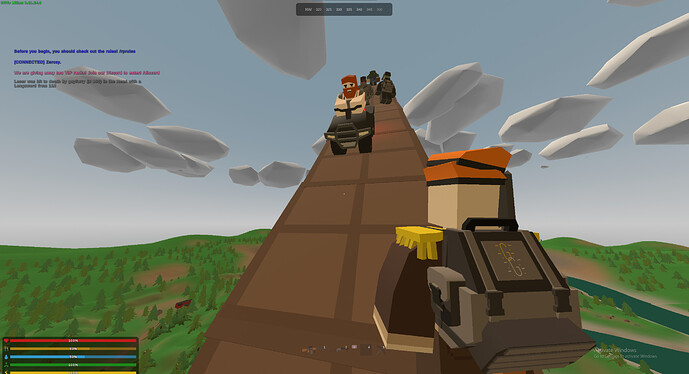 People start riding down it with bus’s and ATVs, which reminds me of Halo racing. 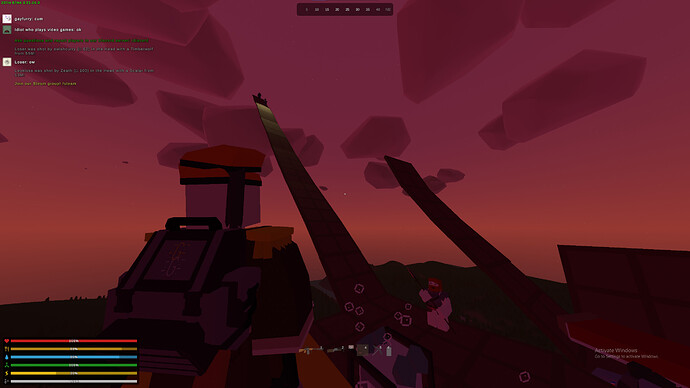 We establish another rest stop, short and sweet. We’re high enough to the point where we need oxygenators to survive.

And finally, in all of its glory, we reach the skylimit and begin to build the Sky Commune. 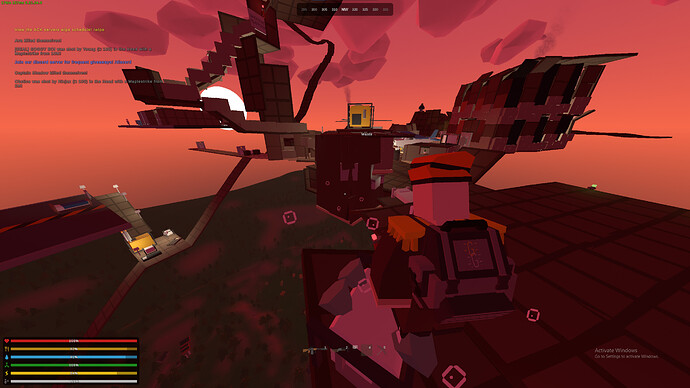 A marvel of human engineering, free from staff tyranny and shittery, a place where the common worker can relax and have a beer. GPPC sets up a shop here, and goes about its private ventures. Players from all around Washington take a flight to see the Commune, adding more parts as they come.

The next day, we wake up to see all of our hard work, hours upon hours building to the skylimit and having fun, was wiped by admin abuse. So much for “roleplay”.

We did it all again, building from the ground up to skylimit, having a blast. This time we actually used structures instead of free-forms, which took even longer to get to the skylimit, but it was very fun. We had one long path with a ton of player housing on the left and right of it, almost like a sky road. The Second Sky Commune was just as beautiful, if not more organized than the first one. 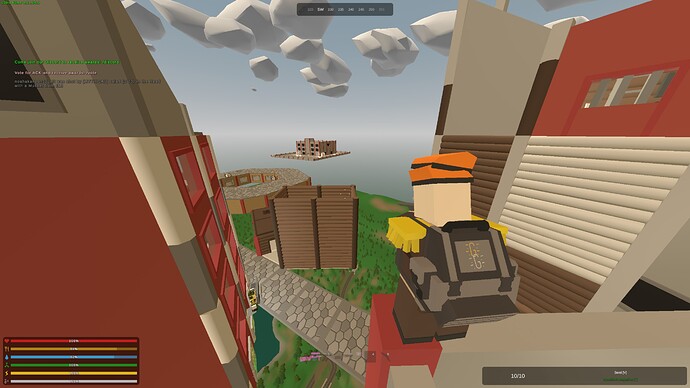 Only to, again, get wiped when we woke up the next day! The wheels of admin abuse churning their way through players’ fun roleplay experience.

This time, when we woke to play, not only was the server wiped, but an admin took it upon himself to abuse build-mode to fly a roof all the way up to skylimit, and built the road himself, and called himself the mayor of “sky town”. Not only have our town been wiped twice, but some bullshit admin took all the credit and abused his way to becoming the new “”“mayor”"".

We ignored the blatant admin abuse and began to build on “sky town”. Soon, I placed flags around the road labeling it as “Sky Commune” with a trans flag to represent our unique diversity and because the colors are pretty. On each flag, we had a metal place that explained that “Staff exist to protect and serve the owners profits made off exploiting children and P2W. Fuck the staff team” 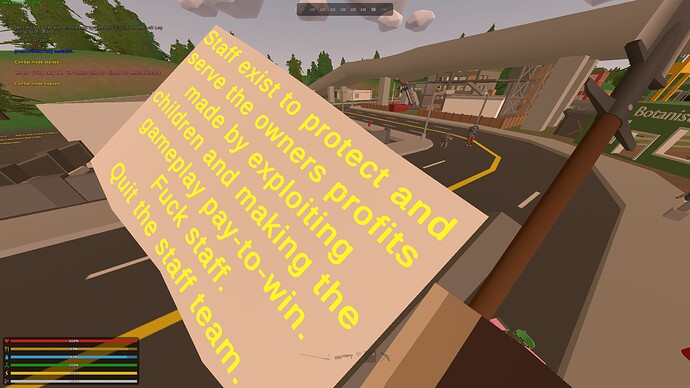 Two more placards were placed on the sides of that one, explaining “Contact the mayor Rain on Discord for any help or info Rainie#2672”

Our Sky Commune administration also took it upon ourselves to remove a Mass KOSer by busting his bedroll and placing metal wardrobes blocking his doors until an admin could get on. Instead, the admin never banned them for mass KOS, and banned me for “griefing”.

When the admin came and saw our flags and signs, his butthurt ass immediately demanded that we salvage them - no - he OFFERED to not ban us if we salvaged them thinking he was being gracious and benevolent. I reminded him that anything less than keeping what already exists in place, would be blatant admin abuse.

He argued it was griefing. I said it was not. He said it blocked the road. I said I could walk past it just fine. He said vehicles could not. I said I never intended for vehicles to be on my road. That got him super cringe angy angy admin upset time threatening to ban us. We reminded him again that it would be abuse to wipe our Commune or any of our structures and he didn’t care.

Admins are pigs that exist to remove roleplay from roleplay itself. They have never contributed to do something positive that the players themselves couldn’t do - warp camp KOSers, evict KOSers, build protected housing - and so on.

The best roleplay experience is when there are no admins online, genuinely. It isn’t roleplay when your time is half spent in an admin sit and half spent reporting or complaining about abusive staff.

on a light note, the kid that ran the gun store gave up and opened another one in the actual seattle gun store. I hired by bodyguards to help “compete” against the competition, and “ruin their profits”. Random players even contributed, one person blocked the front door with an APC littered with advertisements for my business lmao. 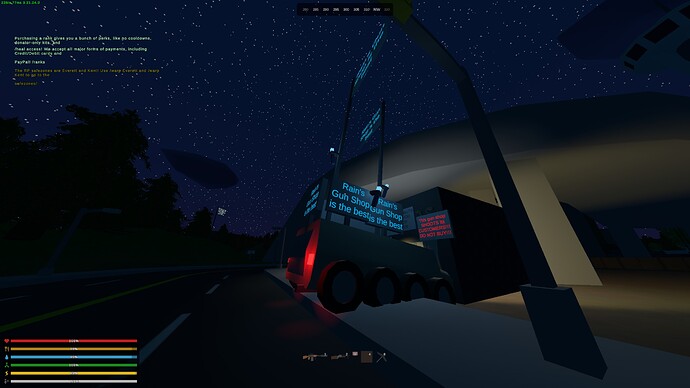 Why you want to F word the staff??

@Leprechan12 This is the moment I mute the thread because it’s being shat up.

If you can’t stay civil and on-topic, don’t bother posting. While politics isn’t explicitly mentioned, it is covered by our On-Topic Discourse policy. Next offense is a punishment, so please stop.

I came to their discord to report multiple instances of admin abuse, but instead of any admins being held accountable for their abuse, I somehow end up with a perm ban? Make it make sense. 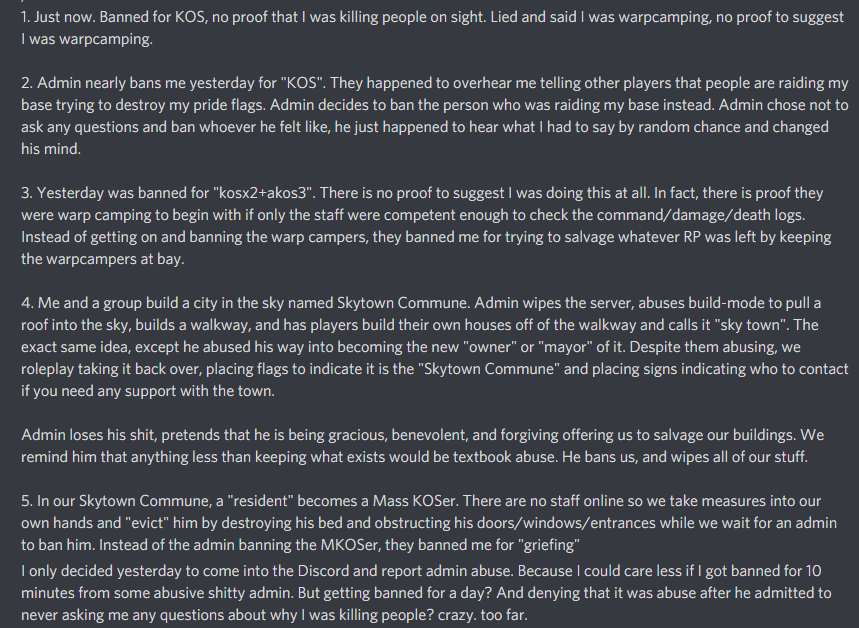 They replied to my reports of admin abuse, so I replied back smashing their shitty justifications for admin abuse 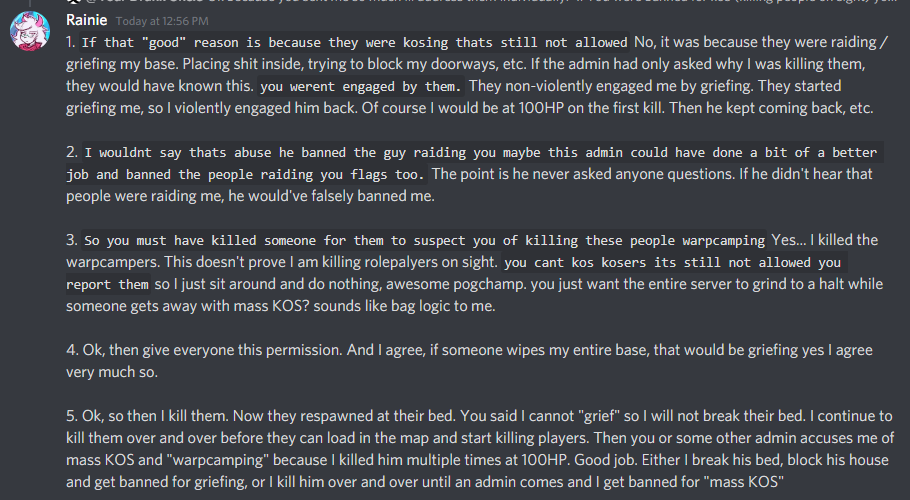 I also took advantage of their “suggestions” chat, submitting a suggestion that was overwhelmingly popular among members of their community.

Today I made another suggestion. It was the same idea, except I worded it better this time (because the only two people to disagree with me, disagreed because they didn’t understand what I had meant). So some butthurt ass discord mod comes in, harassing and insulting me, threatening to “remove perms” or some shit, and makes himself look like a total clown.

Typically I would censor their username but its discord, you’d need the four digits to find who they are. 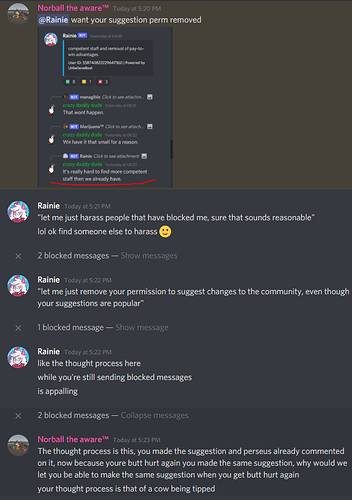 Also right before I got banned I made these pride flags. Coincidence? I think so. 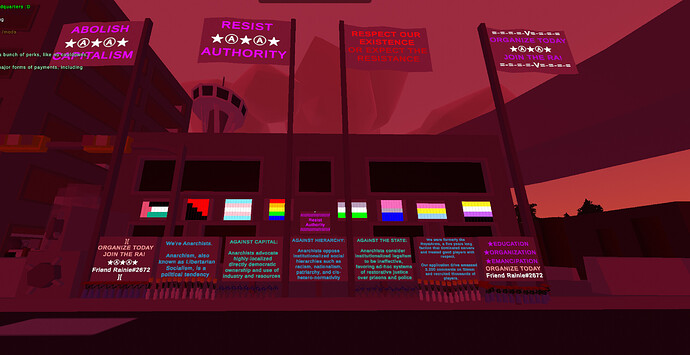 I’m half-joking but also half-serious about this. It goes both ways I suppose.