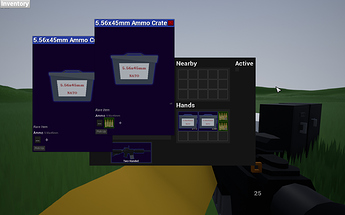 image1680×1050 224 KB
Players can pull from “Inspect” menus regardless of distance. Similarly, a prop’s storage menu allows for the same exploit. Inspect windows should automatically close if you’re out-of-range, and storage availability should automatically update based on proximity.

When performing the bug, it also doesn’t update the prop storage’s inventory menu properly when you pull stuff out (leaves behind a second “ghost” icon that you can move to a different location, but it’ll only end up moving where the actual item & icon is).

It might also be a nice quality-of-life suggestion if the “inspect” menus also closed when you exit the inventory, perhaps, or add a keybind for instantly clearing all the menus (or config option).

Bug: items classified as a handguard 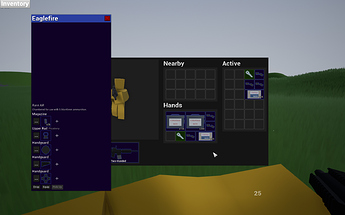 image1680×1050 230 KB
The stock, handguard, and barrel are all considered “handguards,” and are all being considered valid placement locations for each attachment/component.

Players cannot modify the Eaglefire’s attachments from the Tactical menu opened via “T”.

The Eaglefire’s barrel is unnamed and has the camera for its icon potentially viewing it at an unintended angle.

Similarly, the handguard’s icon should probably be rotated too. 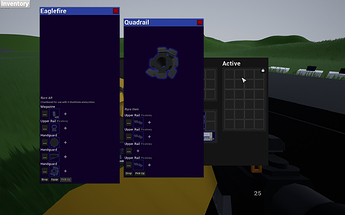 image1680×1050 226 KB
Give each rail on a handguard a unique name corresponding to its position. I’d recommend doing it by specifying either:

Similarly, passenger doors on cars could have more unique names based on relative position. 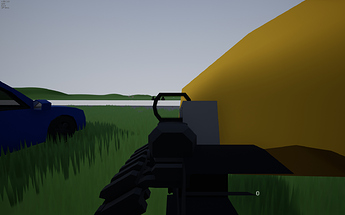 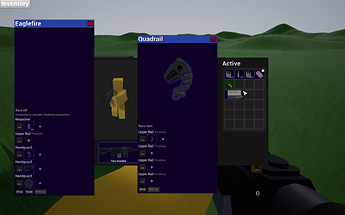 image1680×1050 239 KB
For items like the Handguard, I can stack a ton of attachments on them but rather than increase the item’s size it’ll only shrink the icon of it. For convenience, I’ve made a question mark to explain my puzzlement. 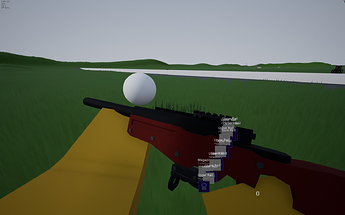 image1680×1050 228 KB
Too many interactable hooks results in this mess. Should instead explode into a more dynamic “web.” Adding lines back to where each attachment hook is, alongside potentially color-coding the interactable buttons in some one, would help clear the web up imo. There needs to be some sort of margin/padding on a 2D level, even if the areas realistically overlap in 3D. 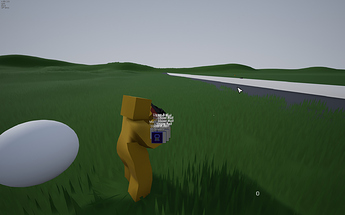 image1680×1050 233 KB
The same applies to third-person view, regardless of how many hooks there are. For third-person it might just make more sense to list them all out in columns or something, rather than try to pin-point them accurately. 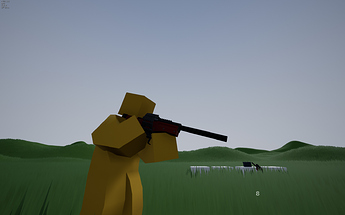 image1680×1050 177 KB
Albeit wacky given the circumstances, there’s still a lack of visual parity here. Although not super important, it’d be nice if the character model actually aimed down the proper canted sight in both perspectives too, so that other players can see what the person is really doing. 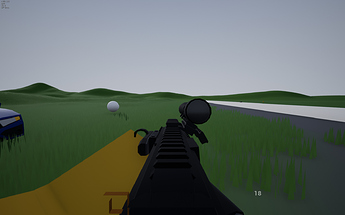 image1680×1050 195 KB
Aiming without an optic makes your first-person camera clip into the backside of the orange-ish bit on the Eaglefire, and as such the face disappears.

Currently the priority of optics is dependent on the order they were equipped in (this applies to how the optics radial menu sorts optics, and how the the keybinds for switching back/forth between optics decides the next/previous optic).

If possible, it’d be more useful if it was dependent on the item’s location on the gun. Although it wouldn’t always be accurate if it tried to match one-to-one, so it could instead just move around in 360-degrees, and order it like that. 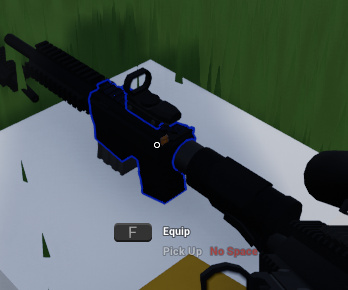 Interaction highlights aren’t updated to consider attachments. That also means that the player cannot interact with the Eaglefire except from its receive.

When ADS in Third person, the reticle/cursor disappears. This is likely due to ADS in First person getting rid of the cursor.

Also the car doors do not block bullets. I am not sure if this is bullet penetration working properly, or the clipping on the doors not properly stopping bullets.

When using “Toggle” instead of “Hold” for primary attack control, it functions a bit weird as it prioritizes toggling off, then bolting, then toggling on, then shooting. I have to click the button four times every time I want to shoot (excluding first shot).

Of course, using the Reload key to bolt makes it work more properly. With the reload key, I only have to tap the key and the gun will automatically shoot again, without requiring manual input despite being in toggle mode.

Personally, I find the toggle kinda weird, but for semi-automatics (and bolt-actions and pump-actions and what-have-you), it should just require manual input every time imo.

The code lock currently requires you to click or tab into every individual digit, but I’d like if I could just type 4 numbers. In addition, the Enter key should allow the code to be entered. 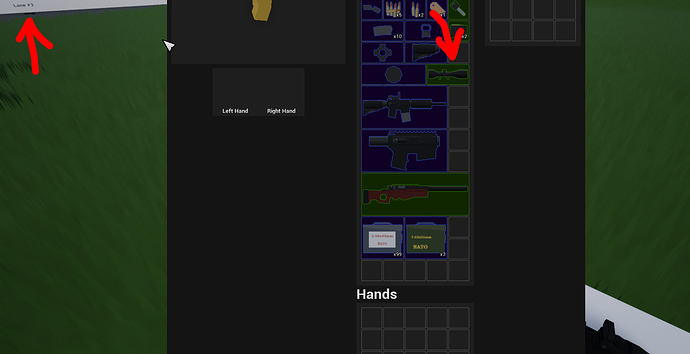 I’m 99% sure that all the rail slots being Upper Rails and all of the other slots (except the magazine) being Handguards was just placeholders.

BUG : u can press alt when scoped in and this happens omg


Igniting a car with a gun


Oh and also car back windows

When dragging a stack of rounds into an ammunition crate, there will still be a x0 stack of rounds present. This disappears when the inventory is exited and re-entered again. 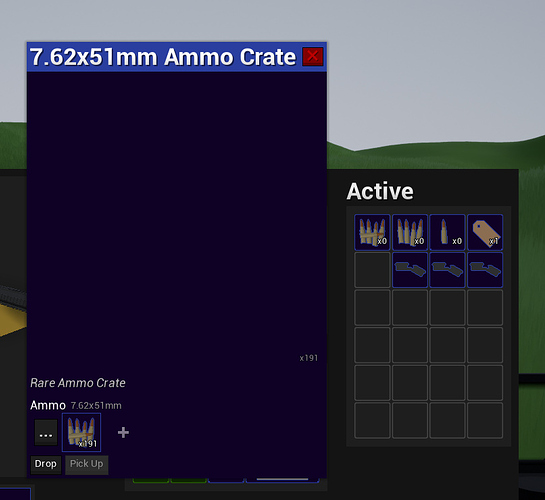 Also one thing to note is that the previews occasionally seem to break again.

Further investigation shows that this only occurs when the stack is dragged into the (+) slot and not into the rest of the stack in the UI.

Strangely, this bug has only been shown to occur with the 7.62x51mm Ammo Crate. The 7.62x51 Ammo Box does not exhibit identical behaviour. 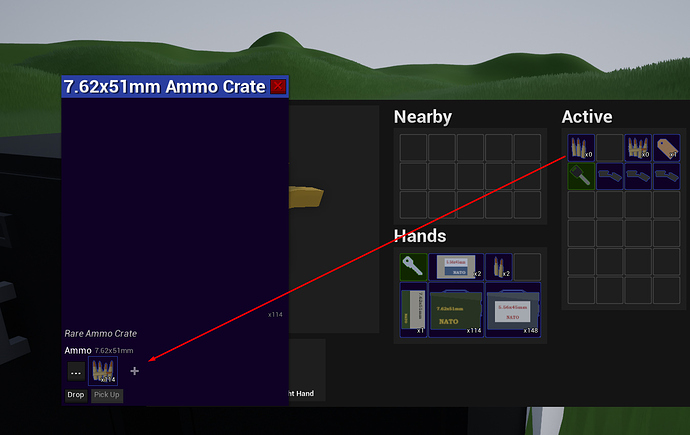 Reproducing the bug seems a bit tricky but I have been dragging the stack directly from the safe into the + slot of the crate in the preview pane.

To clarify, “shotgun” is a term for the front passenger seat, next to the driver.

oh wow, learning something new every day. Thanks for clarifying, thought it was a bug

Drag-and-dropping ammunition into the inspect view window of an ammunition crate will delete the ammo. This only occurs if the ammunition is stored in that crate’s nested storage, and you’re dropping 100 ammunition or less into itself (from itself).

When dragging ammo out of an ammo box and into an inventory slot, if you’ve chosen to do it via splitting the bullet stack you can split the stack beyond the max stacking potential. Rather than the split be limited to 5 rounds, it’s limited to the amount in the ammunition crate minus 1.

EDIT: The resulting stack split will still be capped at 5 rounds though. The rest of the ammo you split out is just deleted.

What other random terms for seats do you have?

You truly want to know?

Why else would I have asked?

Then I will tell you the truth

We only have shotgun.

But here’s some trivia

It’s called that because it’s the same spot a guard with a shotgun would sit in stage coaches… So yeah, that’s why it’s called shotgun