Hello!
I get irrationally angry at the Unturned UI so I remade it through some concept videos.

All the logos and UI elements are made by me, and I got some help from Dug, Toothy Deerryte and Renaxon. I’m not the best editor or designer, so there are some things I couldn’t particularly articulate here, but with that said, I’m happy with the end result here and firmly believe that the current Unturned UI has outlived it’s welcome.

Besides that, the actual main menu is fairly lifeless, even compared to 2.0 where the time in the barn would cycle around and would change the lighting of the building. Any animations or changes in the main menu world would greatly alleviate this. If not, we can ditch the barn completely and go for a Half-Life 2 type menu which tracks the last map you’ve played and displays a video of it on the menu.

The hud feels very catered towards consoles and I am not a huge fan of the sharp edges. Although the walking character concept is cool tho.

The concept looks really cool but I do not like those buttons at all. If they were something smoother / cleaner Id say it would be quite nice.

Been a while since I’ve posted

The current UI is okay but I think more quality of life additions would be great!

reminds me way to much of console and that isn’t a good thing.

You removed the fla…

As everyone is saying big console vibe which I don’t really like, the character moving around and especially the car lift going up looks really cool! 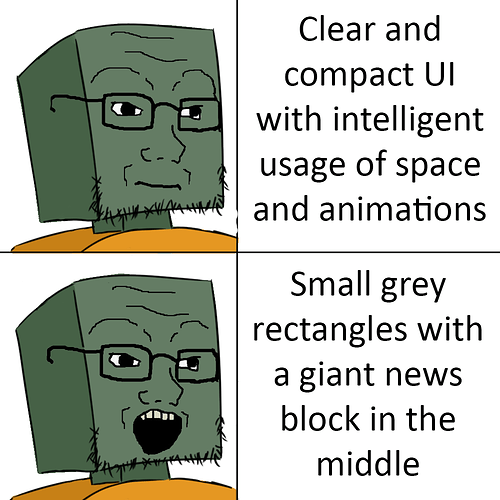 Massive improvement in just about every way; the animated characters in Dug’s barn as well as the improved inventory ui look fantastic and the menu overall looks so much better while keeping the feel of Unturned! The one issue that I see is that the buttons and their move-in animation look very static and like they were made for Unturned Console

This is quite the high-production-value suggestion!

the unturned podcast reminds me way too much of the one episode of family guy where they made a podcast and that isn’t a good thing.

The concepts are quite impressive!

Although they do seem like they are more suited towards the console versions of the game.

Maybe keeping some of the original style while also mixing in the concepts would help.

The works turned out very well and I especially liked the second one, although I loved the very marked background change in the map selection of the first one.
But hey, listening to this song gave me a very strange mix of feelings, I miss (sim eu digo saudades e não apenas falta) the time of the release of unturned 2.0 or the time of the 3.0 betas. Ahhhh, good times!

The walking character is pretty nice but the other things just look off, like they dont belong in Unturned

It looks like the animation was ripped from the console version of the game, making it look off-brand from the main game.

Also, most people have grown accustomed to the current UI as you get to see patch notes and popular mods. Removing these features would create a disconnect between nelson, modders and the players