First you need to download the Unturned II dedicated server from the Tools Menu. 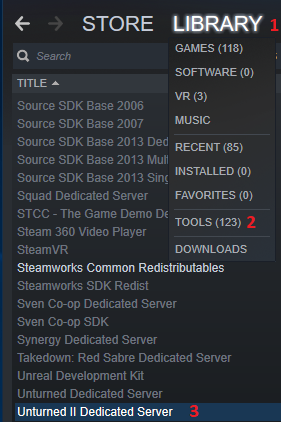 Once that is installed, browse to that Server’s local files.

BrowseLocalFiles962×337 27 KB
Go to the top of Windows Explorer and copy that path.

You could do this from command line, but we will make a batch file.

First step is to open up notepad. Create a new text document, this document will be used to launch your server so name and save it appropriately.

Last step, change that .txt file extension to .bat and double-click the icon to launch it!

You should see a command prompt window appear for whichever map you chose to host and you are done.

In order for other player’s to join your server who aren’t on LAN you will either need to utilize Hamachi or some other virtual LAN adapter, or port forward 7777, 7778 and 27015 on your router.

This file has been truncated. show original

Hope this helps anyone looking to spin up a server for themselves.

Error:
There was an error during connection to the game.
Host did not reply to handshake.

Looks like I can’t join the server locally either, through my IPv4 which eliminates port forwarding, or firewall as the issue. Is this method still the recommended way to host servers? U4Server.exe is up to date as well, Unturned version and build #.

Running a client on the same machine as dedicated server(s) requires specifying the -DisableSteamServerInit launch option. Running a listen server does not require this however.

Specifying a dedicated server name is currently done with the -SteamServerName=“My Server” launch option. In the future this will be exposed in a more user-friendly manner.

Is it possible to host a server on another drive, like a D: drive or E: drive for example?

Certainly. I don’t see why not. But your file path will look different than what I have there.

Ended up getting it working on an Azure VM. Not sure what the issue was before. When I find out what I did wrong I will update it here. Also I will improve the guide with attached files and images.

Just had the time to update it.

eyy this is really helpful

@SDGNelson What are the new maps called for server hosting? Thanks!

When attempting to run the server with -DisableSteamServerInit, it crashes with a FATAL ERROR, error. I’m going to keep trying, and maybe try on my 2nd PC.

I should also add that from experience with Unreal Engine, the fatal error is because a line of code somewhere is messed up. I bet a piece of code doesn’t like the -DisableSteamServerInit cmd.

Yo hold can you explain me more detailed. Because i dont get it very good. So i was makin a server yestarday. I just want to make normal pure vanilla srrver on hawaii. I made everything like the guy say on youtube. Server is working but only for lan. So i found out that i need to port forward. I did that but i dont see it in internet again. I was looking and fixing and trying for like 6 7 hours in one piece and didnt do anything. But i saw that guys on ytb has virtual server and i dont have that. I only have DMZ and port forwarding. I went in port forwarding or diversion and i did everything like the guy says. After that i went into firewall settings and made new rule for tcp and udp . And still dosent f****** dosent work im gonna have meental breakedow. I dont wanna pay servers because im gonna run it 3 4 hours daily when im on at the evning and i aint payg 7$ for 3 4 hours a day. Can you help me or do you know what is the problem?

This guide is for Unturned II not Unturned 3.0

Oh hey Gopher. Im the guy that played on the Warzone server with you. You wanted to make a dedicated server and i never found you again. Until now haha.

A post was split to a new topic: Changing server params?