Hip-firing is garbage and we never use it, unless it isn’t a close range situation. When you hip fire, bullets obviously travel in random directions and mostly away from the enemy, so we resort to ADS(Aiming Down Sights). But the thing with ADS-ing is the fact that the bullets always go straight towards the direction you mostly desire. This mechanic is in most modern shooter games, and it’s way too easy, so we should drop the aim-assist and get to know our guns on a more personal level. When you fire while using ADS the bullets should travel near the center dot and the longer you hold the trigger the more inaccurate you get and the more noticeable the bullet spread becomes. This should apply to the new ballistics system, I believe it can have a slightly more positive impact upon gun-play where you should learn what kind of gun you are most comfortable with. If someone already made a post considering this then I couldn’t find it…

tl;dr
whether you’re using iron sights or fooking laser sights, bullets will not travel directly on the center dot

I think this does happen, but you can negate the DANG thing to basically fire like a laser rifle with maxed skills and best attachments.

If the weapon model doesn’t move with the shifting point of aim, I am against this. If it does, this could be acceptable.

true dat but skills would contribute to controlling weapon recoil, not how straight it shoots.

i believe weapon sway is gonna be a thing…

When you fire while using ADS the bullets should travel near the center dot and the longer you hold the trigger the more inaccurate you get and the more noticeable the bullet spread becomes.

artificial weapon spread is the ultrapoor

We can increase the kick on the guns. Instead of just going upwards, there has to be a random chance of the gun kicking to the side as well. First 5 bullets should land perfectly, depending on the gun, and the rest is when the bullet spread takes effect

Dear god no, nothing about combat in a survival game should be dictated by rng. There should be lots of recoil but not csgo tier aim spread

This already exists as horizontal recoil in 3.x.

It’s more of an oblique recoil. What I meant was recoil thats straight up horizontal. Unturned’s recoil is 1 straight line, either vertical, or oblique.
I want recoil that goes up, then left, then up 3 times, then right, etc

So an actual spray pattern? Yeah, I guess, just keep aimcones away.

Yep
Here’s the part where I need opinions.
Do we go for a “random chance for the horizontal kick”, or go for the “same pattern every time”

As of Devlog 1, there are recoil patterns, which are affected by a touch of randomness. 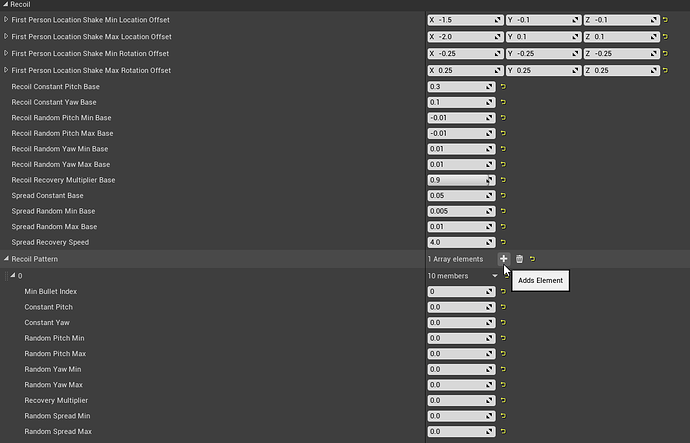 (Numbers filled in here at the time were placeholder.)

Which I’m fine with.

tl;dr: CS:GO but down a notch

Yeah, a small hint of random recoil every few bullets is the sauce we need so it won’t be a fully fledged CSGO survival game