I recently played some Miscreated (an amazing & underrated game by the way) and really liked the health system in there. I would more than love to see Unturned II having something similar to this.
I modified Miscreated’s system a little bit to make it not as hardcore and a bit more casual.

Bleeding:
If you get hurt, theres a chance of you starting to bleed depends on the weapon. When bleeding a little blood icon appears next to your health bar. Bleeding would cause you to lose 1 HP every X seconds.
When getting hit again (while bleeding already) a second blood icon appears next to the first one and causes you to lose blood twice as fast.

Regeneration:
That pretty much means that you would regenerate health all the time. I think getting 1% health every 3 seconds seems pretty fair to me. Would mean that in a case in where you just survived with 1% HP, you would get to full health in about 5 Minutes (asuming only rags, which are the lowest tier meds were being used).

Why focusing on regeneration heal instead of instant heal?

Its honestly pretty simple: Instant heal allows you to get into another fight in seconds after barely surviving another fight. Making Unturned II a game in where you should make smart decisions instead of just shooting at anything and anyone you see, would not only make surviving in general harder but also gives players a reason to be more careful on their actions. If you were to be in a fight with someone and hit him a few times, you would know that he couldnt just heal himself to max HP in 4 seconds, before he jumps out basically having a health reset. It would make pvp more fair and yes… here it comes: rEaLiStIc . I think I wouldnt like this idea myself if I wouldnt have tried it in Miscreated but it seems to work really well. It also adds diffuculty to the turned as you cant almost die to one, quickly patch up and go in again. It removes the paste of the game a little bit, forcing players to be extra careful on how they move and if they want to take the risk to get hurt. Adding more use for guns to be used against turneds instead of melee as you dont want to wait for 5 minutes to continue.

This was a basic idea on meds in Unturned II. I didnt include any pills or vaccines as I think they shouldnt really give you HP. But rather help you in other ways (remove radioation, cure sicknes…)
For the Arena mode you would regenerate health way faster in general, to make it fun and casual.

If you read this, please vote so we can get a better idea on wether you like the base idea or not:

kevin… my name is kevin.

A rework of my original post, with several edits suggested by various community members. Don’t worry, no more amputations, and I’ve cut down on a lot of the proposed statistics to fit more into Unturned as a whole and make gameplay actually enjoyable instead of a pain and suffering simulator for masochists. Enjoy! Afflictions and Effects

I am not a big fan of any engagement no longer having consequences after 5 minutes, I would rather a regen system tie in with a metabolism system so you cant just afk, you would actually have to go out and do something to get your health back, otherwise there would not be a lot of consequences for anything.

My thanks to you, the boy known as Daniel

It’s pretty odd, but not bad at all. Just needs a few tweaks for balancing purposes. The medkit, depending on its rarity and size required to fit in storage, should heal more than a simple 20%. Since it’s

it should be seen that it is pretty rare. And a medical item that is rare shouldn’t be as mediocre as you put it out to be. A pretty rare item, can’t be crafted, only found in specific areas should do as little as 20%, despite the regen speed up and double bleed healing, this can easily be done with 2 bandages which can be crafted using a bunch of cloth. So we need to put more value to it because if I personally came across it, I’d say that I can get almost the same result with 2 bandages, why waste time, energy and risk myself going to the hospital for a chance to get something that I can get from regular cloth?

So, maybe heal 50% as well as speed up the regen process by 60% as well as (this might be overkill) removing all debuffs such as broken bones and bleeding, but the nerf to that would be extensive time needed to use it. This is all just to make it fair for an item that takes more space than a bandage, can’t be crafted, and is pretty hard to find.

Those are my thoughts, but I love everything else as a way to stop people from spamming bandages, the health regen will give them a choice to risk their lives or run away from gunfights.

I like this idea, but I Think some things could be more advanced or something. For example medkits, could be used more than once, why? bc they have bandages, pills, other Medical supplies in them, so they would be usable many times for different stuff, and they ccould be refillable with the stuff you used rom them, so they would simply work as storage too… but jeh not going to explain that much about medkits.

bigger wounds.
bigger wounds should be shuttable (totally a legit Word) but they dont heal by themself, you would have to stitch it up… sew it upp…? jesus 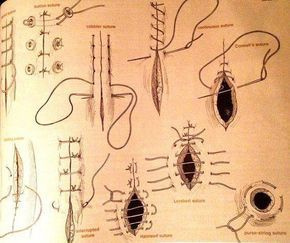 so there was a few examples. It would give the game more in to it and make people Think more Before they act and so on… hope you understand what im trying to say