A rework of my original post, with several edits suggested by various community members. Don’t worry, no more amputations, and I’ve cut down on a lot of the proposed statistics to fit more into Unturned as a whole and make gameplay actually enjoyable instead of a pain and suffering simulator for masochists. Enjoy! 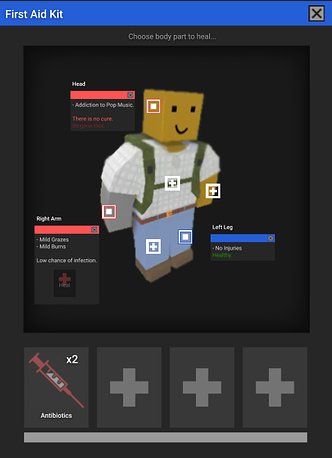 I’ve borrowed this image from @Codian as a visual representation of my proposed health system, which also takes more than a bit of inspiration from Escape From Tarkov, whose system is shown below: 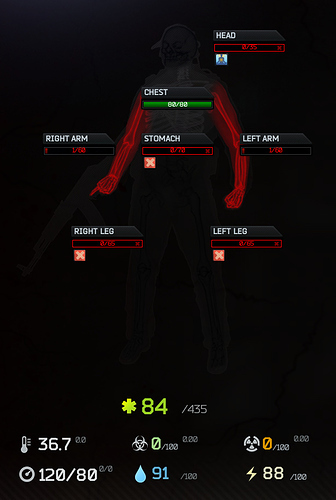 Individual effects are shown on seperate areas, however for the sake of simplicity I don’t think there should be different health bars for each individual limb or areas. There would also be an upgradeable skill allowing the player to self-diagnose more serious injuries and determine severity. I’ve also neglected to include many injuries in my afflictions list, as making them each having a different effect would be too much, rather injuries should just be divided by their severity and damage. Note that I’ve also neglected to include other statuses such as the flashbang tinnitus effect and blinding effect, or effects such as simply being intoxicated or high.

As for healing items in general, medkits remain the main way to restore health, but in a revised system similar to that in EFT, as simply using the item will take priority on the most heabily injured area and these can also be dragged onto areas which you want to heal.

Medkits will also be a storage item that can be hotkeyed for use instead of a magic bag of health, using the components and smaller healing items that are inside it. When an item such as bandages runs out in the medkit, the medkit will no longer stop bleeding until the bandages are replenished. Of course, medkits can also be broken down into their core components.

Of course, based on severity, certain afflictions and injuries would require multiple items in order to fix them, for example severe bleeding would require several bandages. Certain items such as a bottle of pills will only take one pill at a time, however, individual pills can also be found and taken out of their containers.

There’s seven hours of researching and typing that I won’t be getting back. Please leave any suggestions and concerns below.

Holy shit what do you do for a living, how much time do you have

It’s a really good post overall but I have some observations.

I think that anything that slashes and pierces (and heavy blunt) should cause bleeding, but in different degrees depending on damage severity, since relying on RNG and chances isn’t that convincent for many people, including me. This would probably require an adjustment in numbers for balance, like being 0.25% per second the minimum bleeding rate.

And that goes to anything on which you’ve included RNG elements: there should be always conditions to comply in order to reach a status effect, being buff or debuff. IMO, the less we have RNG and chance elements, the better gameplay.

Caused by falling from a height of more than five meters, and affects only the legs.

To balance this a bit better, individual health for different body parts could do its part, so that affections for that parts are more determined via a more measurable way, rather than out of RNG.

And about everything else, pretty detailed and very well built. Let’s hope all of this (and probably even more) makes it into the game.

for the sake of simplicity I don’t think there should be different health bars for each individual limb or areas.

Why not, I think it would be great to have many healthbars for diffrent parts of the body

@AtomSplinter edited to include arm fractures and changed bleeding and bruising to be based on damage instead.

@skoeldis because then we’d have to go through the trouble of balancing that out and adding different effects based on damage to those. Same reason why we don’t want individual organs, rather we should just have a total health that is split between different areas.

With starvation and dehydration there isnt really a need for cuttoffs, it would be better to just have it be a slowly increasing debuff instead of stages, as this would probably lead to people metagaming it by eating right before a certain stage hits, also I assume reconnect means regen, but thats a typo

As an actual suggestion for bleeding, there should be small cuts and scrapes gained in melee with turned that would slowly turn into actual bleeding wounds, this would make getting wailed on by a zombie feel more realistic as you arent just instantly bleeding horribly

For bruises I dont think it should be a flat reduction of maximum health, instead it should be a increase of bashing damage taken in a bruised area, with bruises stacking. Bruises shouldnt make cut damage deal more, as a cut on top of a bruise isnt much worse than a cut, same with a bullet hole. This also fixes the problem of shots to kill that comes with reducing maximum health. Also I dont think it should be chance based, instead just a “if you get hit with a blunt attack you now have a very minor bruise”

Same with bruises it would be nicer if there were stages, like stress fractures from small distances, and then normal fractures.

For poisoning and dysentery it would be nice to see some yacking to explain the drop in food/water, but thats a tough thing to tackle.

Assuming everything in the medical category is over time, its all gucci.

Interesting to see the new anti necro measures being taken

@anon67155151 edited, changed bruising, starvation, and dehydration, added debuffs to crafting time, throw distance, and melee damage for frostbite and fractures affecting the arms. “Reconnect” refers to every time the player connects to the server, and is intentional.

@anon24515308 you must have skimmed over the part where I wrote that any open wound can be affected, rags is just a seperate thing.

Looks good, not sure if completely necessary in UII.

This is really good.
But I think bleeding should be more than just a major bleed.
There should be small cuts and injuries that each require a bandage.
These small cuts do bleed a little, but add up slowly. So instead of instant major bleeding, each cut removes some small time between each damage tick, smallest cuts may deal no damage at all. There main risk I’d for infection.

Can I have some antibiotics, I have hemophilia, I head they cure anything.

why indeed they do
yes sir ree

now that’s deep
yes siree give me this

This remember me Metal Gear Solid.

Added Activated Carbon as a way to eliminate the effects of any drug as well as a potential antidote for poisoning.

that’s not how carbon works tho is it