First I should just say that these aren’t mine, rather I was asked to post them anonymously. The current character model looks the same as in the last devlog.

I was impressed to see how well the fingers and feet fit into the design. I like the middle two styles best - reminds me of old school runescape.

It looks good, but unsuitable for Unturned, as the low-poly models just…don’t feel right.

I’m aware that most of the items, objects and models for many entities will be much more detailed in UII, but anyway I’d prefer a decent mixture between 1st and 2nd model, cuz’ I think 3rd and 4rth are overdetailed. For me, good detailing and polishing, but at the same time keeping the classic blocky style that characterizes Unturned is best.

The concept art is interesting, but I’m personally not too big on fingers still. For a game like Unturned, I’d be more comfortable with being a four-fingered man (2 per hand), or just two clubs for hands as usual.

The third style kinda works because of how the rest of the character is design, and I don’t think getting a ten-fingered man (or even eight-fingered) is going to look good with Unturned’s player model atm.

I’ve always been pretty alright with feet though, as long as they look decent when barefoot. No monster feet.

While they do look interesting, they’re simply too big of a jump away from the classic Unturned graphic style that we’ve known with the characters. Perhaps the most striking of the differences is the stark increase in detail in the faces, from very simple pixel-style faces we are used to seeing getting turned into something far more photo-realistic.

I really like the 3rd variation, though the hands can be worked with a bit and the arms and other limbs just don’t feel well proportionate to the character moderl overall. There should be a little experimentation with the 2nd and 3rd variation, see how that fits in with the game. I’ll definitely prefer a model that’s more detailed than the current ones. And god forbid the 4th variation…

None of these styles really fit Unturned. I like the current model, blending the 2.x and 3.x models while making slight improvements,
The first and second model… just don’t match the art style, while the 3rd is too high poly.
Out of these, I personally like the 4th model the best, although it could be altered to better fit Unturned’s current art style.

As astronautPug said, none of these styles really fit unturned. I would rather have the model you have currently.

Honestly, I like the third one a lot, kinda reminds me of the first Metal Gear Solid or TABG. The only reason why all of these look off is that they’re way too detailed and smooth for Unturned, they lack the shapness and simplicity of the old one and the rest of the artstyle.

It’s also maybe because they all kinda look like Playmobil.

I I like the first ones. Just make the model thinner

Uuuuuuuuuuuuhhhhhhhhhh…no,you have done a pretty good job on your own Nelson,as everyone has seen in the devlogs.

Also,these are a couple of light years away from Unturned’s style,especially the 4th version,there is just too much detail,and in my opinion these kinda take away the charm of Unturned’s artstyle.

I feel like the second from left would fit the game pretty well, although I would change standard fingers to two chain fingers (kinda extrusion of hand with thumb sticking out).

This was said multiple times, but I’ll still say that the models look really well done and they’re very fancy. But Unturned’s charm is the low-poly boxy body with no fingers. This is what makes Unturned different from other games. It still has that friendly look on the outside, but a dark and twisted survival on the inside

Nevertheless, it all comes down to what you feel best suits the game. This is merely my given opinion.

although I would change standard fingers to two chain fingers (kinda extrusion of hand with thumb sticking out). 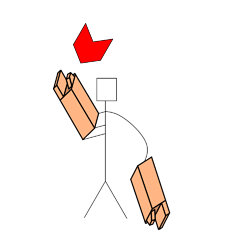 No, I meant exactly what you drawn in the first example

Oh Shit, What have I done. (Did my fantasy become real?)