This giveaway has ended. Congratulations to the 3 winners!

Read the instructions below for more information, including how to claim your prize if you win!

If you win, we need your SteamID (or a link to your Steam profile) so that we can send you your prize. See the previous section for information on how you can do this.

Winners will be notified through their Forum account, via direct message (DM). Be sure to login and check if you won, after entries have closed! Winners have 5 days to provide any necessary information. If you haven’t provided the information necessary to provide your prize, it may be considered forfeit.

Make sure to come back once the giveaway ends, to see if you’ve won! Giveaway prizes will be distributed in January 2022.

Looking for more opportunities to win? Join the Unturned Discord for the giveaway going on there as well!

I remember I once killed a 4 man with a nightrider I got out of a present on Washington that was funny. I think A6 Polaris is a silly little map made by a silly little guy

but in all seriousness the best thing about the holiday is the time spent with loved ones.

I love the cozy feeling of the holidays! A6 has good fishing, also got my car stolen by a certain living statue (grog) while playing on A6.

give your thoughts on the new A6 Polaris map

A6 is just Elver but the highway has a left turn.

The soundtrack for A6 is so good too Stream staswalle | Listen to Polaris OST [by staswalle, Ender & Danaby2] playlist online for free on SoundCloud

What I love about the holiday season is the general atmosphere and the delightfully infectious Christmas spirit. Every year I always try to get my friends each one personalized gift, whether its a physical object or a steam gifted game. I get such a giddy and joyous smile when I see my friends open the gifts I give them and they show how excited and happy they are for it. The winter season and Christmas decor is so tranquilizing. The snow, the Christmas lights, and the cool breeze are the best parts of the season. Its tradition for my father’s side of the family to drive around the suburb area and look at the incredible display of lights in the surrounding neighborhoods and communities. Just last night I did that while wearing my grandmothers yearly Christmas pajamas that she makes herself and gifts to every single family member.

For the new A6 Polaris map, created by some of the greatest creative minds Unturned has to offer;

I love the starting progression. The ability to really cement yourself with gear and a base is quick enough to be exciting and easy to do without getting steamrolled. The beginning of Polaris is most certainly the best part. However that being said, I feel like that fast progression gets to an incredibly fast halt, and then becomes sadly a boring endgame. The endgame for Polaris is tedious and doesn’t have the longevity a map like Arid has.

Arid has those unique and long deadzones good for looting and pvp, as well as a fun grind that allows for a long gameplay experience. There was always something to do that didn’t fall under a boring grind, fish, or camp system. That being said, Polaris’s fast progression makes it so easy to pick it back up again. You can build a base and get raided in the same day which is a nice change considering the standard wipe cycles. I dislike being steamrolled just because I’m a week late into wipe, as is common on Arid.
Elver was also a pvp-centric map but has a harder to obtain gasmask and especially harder to obtain filter system that made deadzone harder to keep doing, which then increased a pvp desire for mesh. The building system in both Arid and Elver felt like a harder but acceptable grind. They had a mostly balanced risk/reward in obtaining the endgame base materials as well. The reinforced plates on Polaris are just too common to get once you get a gasmask or basic military gear. The endgame really just revolves around raiding and there really isnt a point in raiding when the whole endgame doesn’t offer any new loot to obtain.
No matter where in the wipe, you can rise to the top in Polaris if you put the effort and skill in, which is such a unique experience that allows for a quick yet unfortunately repetitive progression system.

-The quests are amazing on Polaris, the NPC’s are super unique and have such great personalities especially for Unturned. Love the penguins
-The crafting system on Polaris is really simple and unique to the foraging, exploring, and harvesting. I just wish it had more longevity
-The map’s style and terrain are phenomenal. Its great to have this unique snow map with features never seen before in Unturned like those beautiful bridges and raised towns. The assets and breakable containers fit so well with the Unturned+ curated style.
-The supplies and weapons are glorious looking. Especially the animated bolts on the guns and the quest items.
-The exploration was incredible, these little extra quests and easter eggs really make the map so much fun to play for the first time.
-The radar truck system is perfect, it adds a lot more fear and risk needed when crafting important lotus’s out in the map away from your base.
-Weapon balancing is very nice and every gun feels pretty well balanced. The gun mods being attachments is way smoother.
-The mercenary and swat armors work great. The movement speed bonus is so underused in normal unturned so it was great to have a heavy armor and fast speed armor. Would be cool to see more defense give you less speed. The PMC armor is the only true endgame loot imo, but its still a cool concept and a healthy grind to get it.

More negative notes/criticism
-Endgame comes too soon and offers nothing new from being able to enter the first deadzone. Even if the idea is just pvp, it can get boring quick. Id say make gasmasks harder to obtain or maintain. As well as add more unique content to the deadzone or after the deadzone.
-The craftable weapons serve no purpose when you can get a good gun within the first 5 minutes.
-Raiding really only revolves around c4, and skybases are most certainly a problem when there is little air vehicle spawns and no point for an oxygenator with a lower map ceiling.
-The lack of furniture is sad considering the immense amount of furniture in previous curated maps. The collectable penguins are fantastic though

With all that said, it is not “just Elver with snow”. It is not “a worse Arid”. It is a unique map with a unique progression system that I really want to see expanded. I have had so much fun with Polaris and I keep getting raided and picking it back up again. Genuinely some of the best fun I’ve had with survival pvp since Elver.

What im excited for in winter is going back home (tmrw, currently I am in Nevada with my Father) to see and spend christmas with all my friends back in my home state. I plan to throw a New Years party and to learn blender to continue work on my own Unturned server.

I wish everyone in the Unturned community a Merry Christmas and a Happy New Year. Unturned has such a special place in my heart with its fantastic community, developers, and modders.

EDIT 1:
I wanted to talk about the amazing quests and questlines in particular. I felt like I portrayed a more negative opinion of the map. The Bernard quest is crazy insane. Unique puzzles that are surreal to see in Unturned. And that tank cutscene/vehicle part was crazy! The creativity with its puzzles and writing are hilariously enjoyable. It really makes the map its own and stands out even more. Plus Reginald and Benedict are such fun additions.

EDIT 2:
Today (12/30) I was playing Polaris on Kodak #2 and I played with 10+ guys that were super fun and casual. I just had one of the best community experiences on Polaris and we all took this screenshot together 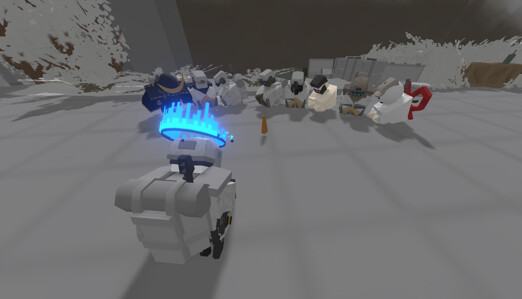 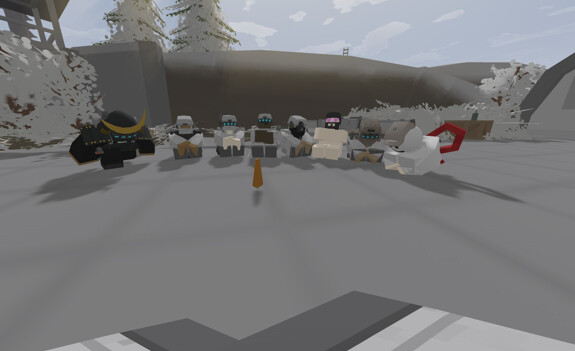 I love the Snow that comes in during the Hoilday. I also just love to decorate for it. Its a nice change in scenary and is a stress reliever for me. As for the Polaris map its of high quality and should be a offical map.

The snow is pretty nice, and so is the coco.

It’s minor but I also enjoy the festive decorations on Unturned maps, wish there were some more.

I remember around Christmas me and an old gang of mine used to play a lot, we celebrated Christmas by giving each other weapons, we had lots of fun

I think A6 is a good map, like elver. But when you finish the main quest, it gets boring. I think should add something fun, just like a snowball on the ground.

With A6 Polaris, my absolute favorite part has to be the Expedition quest line, those quests were super unique and nothing like I’ve seen before, plus Reginald! And with everything else on Polaris, they are just great, 10/10 map honestly.

A6 Polaris is a nice map, it has berets and penguins to collect, a huge gun to mount on a sentry to kill penguins on sight, nice story campaign, fairly easy to complete quests. it also has a psychedelic fish to eat and a talking penguin. my one gripe is that final fishing quest because i swear to god the sakhalin fish never drops

I live in Washington state so I’d say I’m looking forward to the freezing winter, gonna be a really cold one.

The “Reginald” on “A6 Polaris” is really cool! 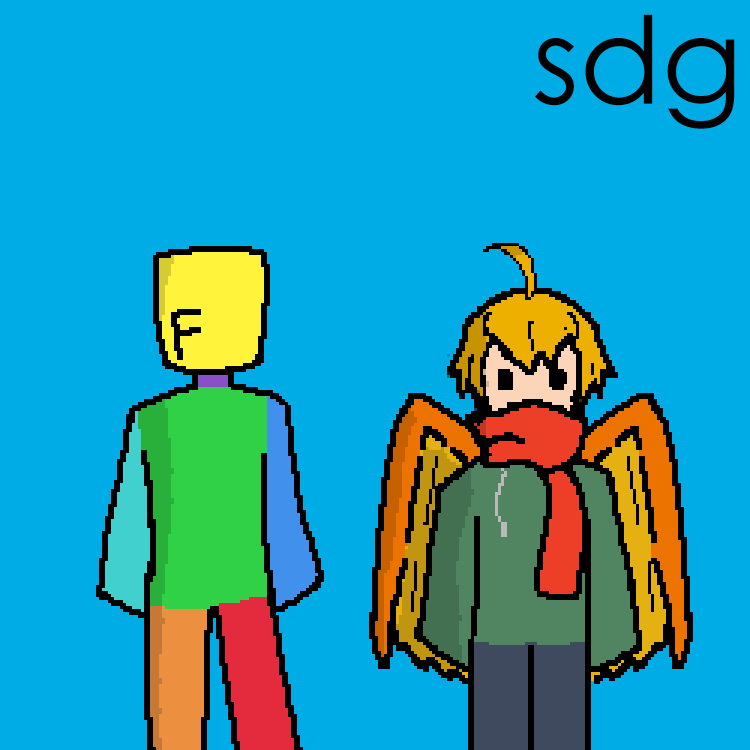 So there are 3 question I could fill out, but imma go ahead and do all three because why not