Real Theft Auto (and other stuff)

Passcodes for lockers U4 Discussion

Now, this is a pretty simple idea. Basically, you can set a combination for your locker, so that only people you trust can have access. It’s a somewhat realistic concept, so…

you could also have separate craftable code locks that you can place on stuff like doors or other buildables, eliminating the uselessness of wooden doors/windows/storage currently.

Since world buildings in 4.0 will have doors, this may play out in a very interesting way.

It came to my mind that players really advanced on thieving in 4.x should be capable of doing THIS 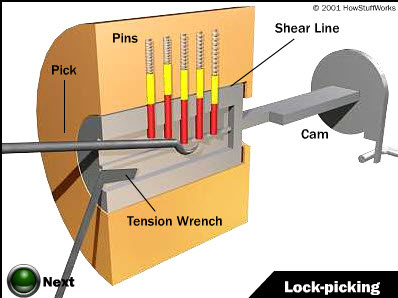 Of course, I have to clarify, anyone attempting this would need the adecuate tools and skill (not with a hair pin or a piece of wire), as there will be locks harder to hack than others, depending on the place and situation. This is meant to open like a second interface on which the player must interact with the lock manually, so this action demands more dexterity and may take valuable time to the player, wich could result really bad if caught by zombies or other players.

This whole idea is intended to allow players to develop THIEVING skills more than just doing parkour and being sneaky.

I’m sorry, but we I don’t think we need that Payday 2 vibe in a survival game where people can simply lock pick into your house. However, if this was only done on wooden doors, then yeah, it’d be balanced and all

I’d much prefer if lockpicks were a one-use or 2/3 use item and not craftable, just to make sure that no matter how skilled a player is, that they can’t run up 5 mins after spawning and bust all of your lockers open simply because they obtained a lockpick and have the knowledge to crack safes in a matter of seconds each.

That was more or less the point. And by “simply”, you mean struggling with the lock, probably making some noise wich could alert nearby foes? It sounds better to me than just blowing the entire sh*t up with explosives that aren’t hard to find at all, LOL.

I should clarify this on the post so it would decrease concerns about this of being an OP action.

The issue with the noise and time is that it still doesn’t counter an offline raid, which is when most bases get raided because there’s absolutely no chance of defense. I’ll admit that I’ve got no fix in mind but it’s definitely a concern that needs to be addressed to make sure that raiding isn’t accidently made easier if they’re offline instead if harder when they’re online.

making some noise wich could alert nearby foes

Offline raiding?
And what struggle? If they can find it, they can keep trying and raid someone’s base with the least amount of equipment used

Yeah, that is what concerns me about this topic, because offline raids will become 100 times easier by using much less equiment

Well, that’s a problem of which there isn’t too much to do about, unless Nelson takes on drastical (and probable unrealistic) measures. It concerns me as well, since I hate a lot offline raiding, even more en PvE servers.

This equipment would be super rare as well, and this is meant to NOT anybody to do it.

Look, in 3.x isn’t that hard to find and stealy-wheely and it uses by simply clicking. This idea is meant to assort but also to balance this current feature.

And yes, it could be.

Well rarity won’t balance an item from being “too OP” because it’s all about luck, and meaning teams will have an easier time finding it thus raiding bases easier, which is why i suggested to limit the lockpick to only work on wooden doors

That’s probably the best compromise between the item being useful and useless. There should be like a 50% chance first time you lockpick that you’ll break it or something though, and if skills in 4.0 are based on doing that said thing, the chance should be higher that you’ll succeed as you progress the skill, but never to the point where it’s like a 90% chance.

Maybe around 70% and 75% chance should be the maximum. That being said, 50% is like too much for the very first time lockpicking; probably around 25% or 30% would be more balanced.