Hello guys. If the global update of the Yukon map (somehow) will be released, what you want to get added? In other words, what you want it to be added to the original Yukon official map?

Since I am in contact with Gekk who is working on Yukon Remake/Remaster I NEED your ideas, so go ahead! 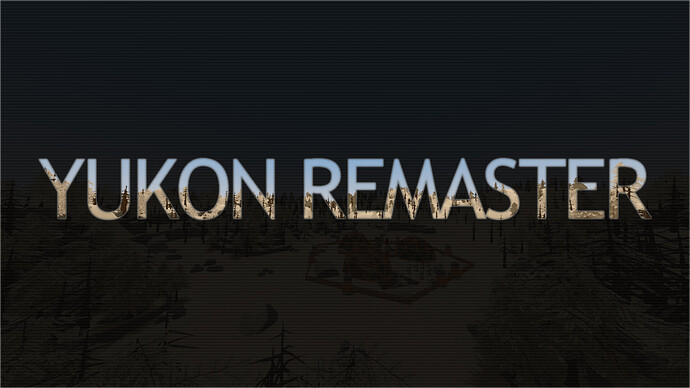 This is for current unturned, so im not sure you can add it and if you can it will be way too much work, but if you are up to it check out my post here . It mainly focuses on introducing more goals for the game and other ways of progression, if its added and ballanced correctly way more items will be kept since they would be usefull in some way, or just wont be replaced easily if you lose your current ones. (if i have to summerize its most guns, clothes, tools have stats, those stats using a workbench and some amount of materials when fixing the item can increase making it better than something found right away. Guns can and need to be scrapped into components to fix other guns to keep them near 100% durability and increase thier stats. Furthermore buildables should be fixable to make them stronger if you get raided and some of the walls pillars roofs survive fixing them will increase thier max health making later raid atempts harder, this would be hard to get right without making fixing of buildables harder than just using a blowtorch, whitch is why i suggested it for unturned || where everything could get reworked to ballance stuff like this)

This is more to Nelson’s priority. Same to Haruki_3’s comment.
As much as I like the ideas, again, it needs Nelson’s effort to be made. And the map isn’t even curated to ask him for so.

So, fun fact: I was part of a project that actually tried to do everything under 2, experimented with a bit of 3, and tried to tweak 1 a bit. Here was my experience with these suggestions:

Pull back the fog during a blizzard a little bit. Rifles feel underpowered when your vision is Bluntforce range + 20meters a good half of the time. Or maybe not. Maybe that’s one of the points of the map and I’m a big bozo. Either way, test it out and see if it works or not.

Blizzards in Unturned work in a very strange way. Their intensity scales with height, and it can’t actually be modified- you can only change the level at which snow appears.

The best clothing (damage resistance wise) give the least protection from the cold.

Emailed Nelson in 2019 asking for this feature.

This was done, but with all crops- although the idea was good in theory, it had very devastating knock-on effects when combined with:

Adding onto the previous suggestion, less water spawns. Camping the vending machines would be vital for survival, and would also force more player encounters.

Arguably, what occurred was more the result of poor balancing and not enough spawns, but you can only push food/water spawns in unturned so far before mass glue consumption and/or suicide begins to occur. Normal difficulty vanilla Yukon is already relatively close to this line, and it doesn’t take much to push it over it- which we very much experienced. Restricting vegetable growth and seeds isn’t an idea entirely without merit, but you can’t limit food and water too much.

Ideally, 4 areas in total that are regarded as “worth building a base near and camping 24/7”. Currently there are only two, Off-Limits and Whitehorse. Quite a massive improvement from all other maps (which only have one being the mili base) but not good enough IMHO.

Depending on your definition, there were three or four of these locations. Net neutral result overall- this didn’t really change much.

In my opinion, the Yukon is one of the best maps in the game, but I believe that a lot could be changed to improve it.

First of all, I wish there was a possibility to melt snow to produce water using a fire and a pot (I never had contact with snow in real life, but I feel this is possible to do, so if not, you can disregard it

).
The reason for this is to make getting water easy, so that you don’t have to worry about it so much, thus putting real emphasis on the real problem of this map: Starvation.

Just like in real life, being in extreme cold will make your body burn more calories to keep warm, so I think that should be the main focus of this map, to keep fed and not starve.

So, for this to fit well in the game, I believe there should be very few food spawns in the city (after all, this is a zombie apocalypse and we can pretend that almost all the cities food has already been collected). Soon the player would be forced to look for an alternative method to obtain food, this method would mainly be hunting.
So I believe that a remake of Yukon should have many animal spawns, so that the player would be led into this hunter lifestyle.

Lastly, I would like to see more makeshift weapons and more encouragement to create them, rather than the player jumping into the first hut they see and finding a hawkhound, so I think there should be less of them.

In summary: I would like a greater ease in obtaining water (through melting snow), a great difficulty in obtaining food (especially in the cities, thus stimulating hunting) and manufactured weapons, and a greater amount of improvised weapons (which could be added through an auxiliary mod).

There are dozens of other things that are tied to the game itself (like fires needing logs to stay lit) that would undoubtedly improve the player experience, but can only be added by the game developer.

Why would you do that with ALL crops? That seems really extreme. The specific thing about lettuce is that it restores both 15% food and 15% water, allowing you to be almost FULLY self-sustainable. With all other crops you have to venture out sometimes to gain water. I still think this should be tried with lettuce exclusively.

Regarding the locations: It may not have changed much in your testing because you played casually, not optimally, unlike the average tryhard. It’ll mean a lot in public servers.

Why would you do that with ALL crops? That seems really extreme. The specific thing about lettuce is that it restores both 15% food and 15% water, allowing you to be almost FULLY self-sustainable. With all other crops you have to venture out sometimes to gain water. I still think this should be tried with lettuce exclusively.

Tomatoes give 20% food and 15% water. Also, the whole experience was meant to be leaning towards “hardcore survival”, so it fit within the scope of the project to reduce seed spawns (we did have one spot on the map that spawned them, but it was locked behind a progression gate.)

Regarding the locations: It may not have changed much in your testing because you played casually, not optimally, unlike the average tryhard. It’ll mean a lot in public servers.

Not sure how you can make a judgement call on our specific playstyle in a project/server full of experienced players that you weren’t involved in but okay.

thats why larger maps for unturned || are neccasary to make suicide less effective if you had to actually use vehicles to get somewhere you couldnt suicide all of the time as you might lose them with ballancing even living in the same spot would be easier to just get a supply of food than wait for the respawn. Losing all skills is a bit too much but there could be something to counter this in unturned || losing skills and stats based on the type of death if you die to a gun you get flinch grayscale removed spawn with less health, if you starve/dehydrate you get food water skill removed and spawn with less food and water, if you fall you spawn with a broken leg. It could still be exploited fall and make a splint unless they harder to make after and actually give a debuff instead of magically fixing your bone, but its still better than spawning with no debuffs at all, that just encourages doing it.

i need a penguin village