This is mainly just to get opinions on a certain idea I have at the moment since I feel like it would benefit any Blender users here that plan to create custom objects/items for UII. I don’t have many ideas for how I should add stuff for items to this yet since we don’t have many examples of them in UII though.

The key to staying vanilla

A consistent style can change the entire feel of a game and make it seem more “professional.” Since Nelson is trying to be more standardized with some of the content he is making, why don’t we maintain that idea over in the Workshop? Now, with 3.0, many people I hope are using some sort of reference sheet or objects or whatever they prefer to accomplish this task of consistency. My current method is to use this .blend file:

image2451×764 526 KB
(Credit to Nelson obviously, Orendi, and everyone else that contributed to my resource file)
It’s simple, but it works. Within a short period of time I can bring in the model for a basic doorway whenever I need to add one to my building. For some people, using this setup would be inconvenient (although it saves the time of remaking assets each time) so it just isn’t good enough anymore. But what can be done to improve this?

https://wiki.smartlydressedgames.com/wiki/Modding/Props
Oh wait, I seem to have found some of Nelson’s resources! Lets take a took at what we have under Props.

Foundation Depth: 1 meter below lowest doorway
No more twenty-foot pylons? I guess I can work with this one.

image1886×672 40.7 KB
I don’t like it. Too many numbers, too many instructions, too much of everything. Can we at least get a diagram of this stuff?

Simplicity is the main thing I’m looking at right there with that image. At first glance, those numbers mean nothing to me unless I’ve seen how the gutters look in-game. Combined with a well-made diagram instead, we could be looking at a much better resource to work with instead of a regular table full of numbers. Detailed information is usually good but once you reach an extent like this, it just adds unnecessary confusion.

Simplicity means that even a newcomer to the world of modding can get by with creating vanilla-style content without hours of over-asked questions.

Simplicity means that the dedicated veterans of Unturned can experience a hassle-free transition back into creating Workshop content.

Ultimately, simplicity will make modding as a whole easier, as long as it doesn’t sacrifice the creation of complex and innovative content.

Does the rest of this have a point? I’ll let you decide

So this isn’t the first time I’ve thought of this idea but I haven’t seen anyone else discuss anything similar yet. Ideally, it would start with something as basic as these two images right after this and then expand as time goes on. Since this is going to be made specifically for Blender users (at the moment), I’ll let the pictures explain everything. 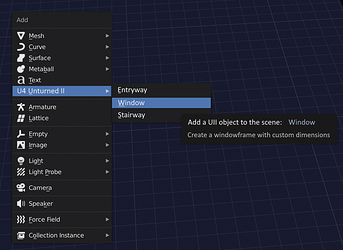 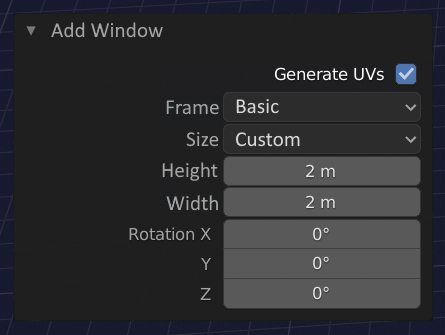 For anyone else who has no knowledge whatsoever on Blender, the images should at the very least be self-explanatory. Simple enough, right? Oh this has much more room for improvement and expansion.

Can you use a nother programm than Maya?

I remember seeing this post during January of 2019. Now, how many times has Nelson mentioned this idea? A majority of us here don’t know exactly what Nelson is doing but this gave me a little excitement when I saw it. By the use of “tools” here I assume he meant just a plugin like what I’m thinking of and also like what he has been messing around with in Maya. But we can go further than that.

A new modeling program for this stuff wouldn’t be too ambitious, would it?

Be honest with this one, the text wall is over

Would any of you consider actually using a Blender plugin that added in a menu like the last two screenshots I sent?

Depends on how much this plugin could make. I don’t see myself using it due to just opting for making everything myself, though, if objects turn out to be very complicated in II (Which I don’t think is very likely) then it’s a maybe.

Well, the goal is mainly to simplify the more common parts of the buildings and allow for quickly bringing in their variations. 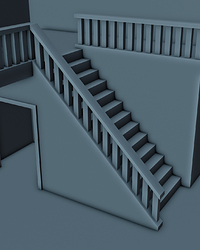 Here is a list of some things I would include to make a different one:

I have exceeded my limit to brainpower this evening so I can’t remember how to word things. At the very basic steps of the idea, it’ll basically be a version of the Architecture plugin that comes with Blender except for using the style of UII for everything.

@Azzaholic I didn’t think of automatically generated buildings and I don’t think I’ll look too far into that unless I have nothing to do once all my major projects are done. The farthest I’ll go towards generating structures is most likely just common room layouts. Something like how in my 3.0 resources, I have a copy of a cell from the prison on Germany just because I like how it looks.

The only automatic things I’ve thought of so far were an automatic city generator and a tool to place item spawns in certain buildings. Both of those ideas depend on what Nelson and everyone else does though so they aren’t anything big that I’m focused on.

After a seemingly longer week of school and a few days of playing games “coping” with coronavirus, I finally got back to what I was doing. There are still a few more things for me to look into with this part of the plugin but overall it was actually a lot simpler than I originally thought.

It pretty much just makes all of these in the picture along with supporting different sizes but a few button presses with it is a lot better than making the doors and windows from scratch, or performing some complicated maneuvers to reposition something you’ve used maybe once or twice in the past few days.

Blender_UIIaddonPart11535×548 807 KB
I’ll upload the first version of this sometime either in the next few hours or tomorrow night. Once I pick apart the stairs a little more I’ll get those ready to add in as well. Also, I’m considering a version of this for Maya in case people see it being useful.
11 Likes
CravenWarrior March 25, 2020, 9:28pm #8

Tweaked a few more settings and it can now generate these with only slightly messed up normals. 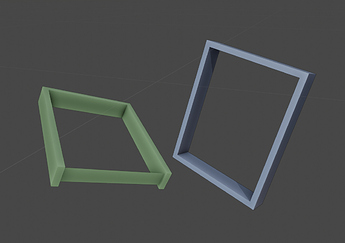 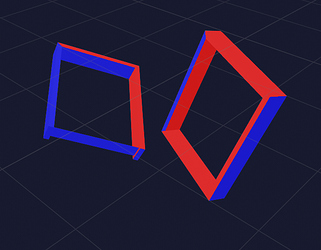 Google Drive Link: (NOTE: Normals are not flipped correctly at the moment)
https://drive.google.com/drive/folders/1AG8v2HTtw8uvUd0Xtd929MmSHsQSH8nO?usp=sharing

I said I would upload a version of it six days ago so here it is. It isn’t broken in a way that’ll make it not work but as you can see from the last post, there are still some minor issues that came up. Since it isn’t in a state that I would consider “good” for use by the general modding community yet, I’m just gonna ignore any nice instructions on how to use it at the moment. (It’s a regular Blender plugin)

Currently, it functions almost exactly as intended in Edit mode, your cursor determines the bottom, center point of each object added. Window offset has been ignored at this point but I believe it is either 1 meter or 1.25 meters from the floor.

I went through and redid most of what I had before since I didn’t really pay attention to which vertex went where when I started this. Now I’ve got a fancy picture I can look back to as well so I can tell what I need to connect for each face. Nelson answered a few of my questions on stairs and windows recently so I should have the information I need for another update later this week. (Mainly stairs)

Normals still haven’t been corrected but they are more “consistent” in a way and I’ve figured out one way to fix them but I need to look into it a little more. Turns out that the better solution was even simpler than I would have ever guessed if I didn’t try it. Apparently vertex order DOES matter, reversing the order on the problematic faces made it so that the normals now face in the correct direction. It’s more of a minor thing and since the stairs are almost done, I’ll wait to finish that before uploading the fix for the flipped normals.

At this point, all of these can be made without much effort. 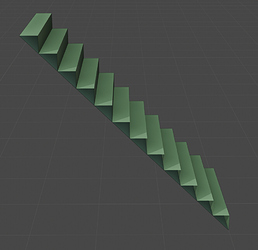 image919×888 101 KB
A staircase and a ramp generated with the same settings and in the same space for better comparison. It uses a loop that creates steps of a certain depth until they reach a height given by the user. Each step has a predefined height of 25 cm. I’ll add options for railings and then upload it.
4 Likes
CravenWarrior April 8, 2020, 3:08pm #12

Version 3:
I changed my mind about the railings part. I need to figure out how to add in stuff like drop-down menus before I start throwing in a bunch of customization options and presets.

For this update, here’s what I did:

Stairs have three important values for changing their appearance:

Window offset has been ignored at this point but I believe it is either 1 meter or 1.25 meters from the floor.

In case you haven’t gotten this answered, its 1 meter off the interior floor.

I didn’t know exactly since I was seeing both of those offsets in different buildings.

Version 4:
I haven’t made an update to this in a while because schoolwork was just in the way of everything until a few weeks ago but I’ve recently started to work on this again.

This update is fairly small but here’s the two main things that changed:

I had the railings functioning with different step depths earlier today but some of the things I’ve been changing messed that up a bit, the standard 25 cm depth should be good for most stuff and if you really need the deeper steps, there isn’t a ton of work needed to fix them.

I still need to figure out how to do the presets before I make the next update.

This would be a real cool object pack for 3.0