1.A military helmet is able to fully protect its wearer. (the result will be a small shock impact, with the fire helmet you do not have bullet protectors) 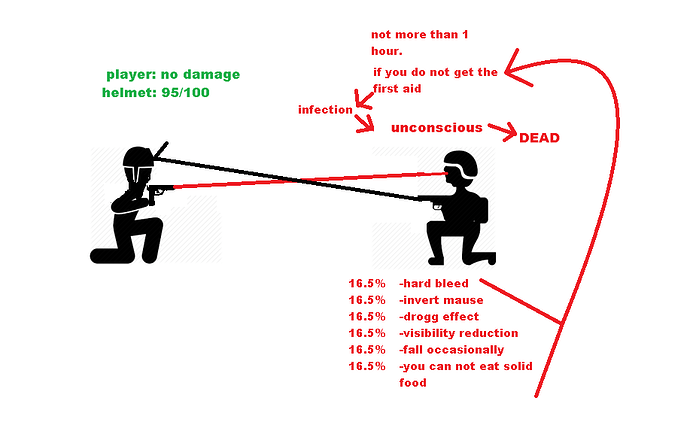 3.the pistol bullet does not damage the police vest, military vest (but it’s dead if you do not have protection)

4.armor, gun should be extremely rare. (to focus more on PVE …kill zombi, get food…)

6.balance all of these
-the scopes should be very rare (can not be built)
-big recoil
-ammo is also rare
-male weapons are easy to find

7.you can not commit suicide. (makes food very important)

I know that the suggestions are repeated

If it’s a 1 hit to the head, the it encourages PvP because that noob with a sportshot shoots you once as you dropping stuff for him. I think either bigj or molton said that 1 shot hedshots just make the game a game of paranoia, cause you could die at any time from the sadistic 3 year old. (Also 1 shot headshots aren’t very realistic because you can survive an Ak bullet to the head, without armor. What games often don’t show is how good your bones are at actually protecting you.

I like this but I would add a couple of caveates:

Military/Police vest: Does not protect against high caliber rounds

Player zombies inherit the ffects of this armor as do any zombies that drop the rare military peices.

It was a bit hard to understand completely what you points were, seeing you aren’t the best at English, but I think I know what you want:

1.A military helmet is able to fully protect its wearer. (the result will be a small shock impact, with the fire helmet you do not have bullet protectors)

not completely sure if this is what you mean, but do you mean that the military helmet should have bullet bounce and the fire helmet it goes straight through but with less damage? If so, that may make the military helmet a bit OP. I think that your 2nd point, helmet can not protect the whole face, would be a good solution for that. The helmet only defends the part where the helmet is, not the actual face.

3.the pistol bullet does not damage the police vest, military vest (but it’s dead if you do not have protection)

This would be weird, because some pistols in real life also are strong enough to penetrate police and military vests. It could be a thing with the colt and kryzkarek and other future 4.x pistols, but with for instance the Desert Eagle it won’t be really realistic.

4.armor, gun should be extremely rare. (to focus more on PVE …kill zombi, get food…)

Agree, yet I don’t. They should be more rare than they are in 3.x right now, yet not so rare that you can literally find one gun after 4 hours of playing and only have 47 bullets to shoot with it. Armor could be less rare than guns, but also should still be more rare than it is in 3.x

This would make Unturned a bit too hard to play with a gunfight. I have heard alot of ideas for medical stuff for 4.x, and if Nelson decides to add all of them Unturned will go a bit too far in detail, even for 4.x. Maybe he could make it that an exact shot on the middle of a leg, arm or rib it could be broken, but not a hit that’s on the edge of a

-the scopes should be very rare (can not be built)

This would make unturned too hard. Big recoil isn’t needed for every gun, some guns can just have a bit more of course, but making it alot for every gun is just pointless and hard .

It should be rare, but not so rare that you literally find 60 bullets for a gun and then it’s over and you have to loot a different location.

-male weapons are easy to find

I’m gonna assume you mean melee and not male, because I don’t think weapons have a gender yet. As of right now in 3.x melee weapons are already easy to find, so this point already is implemented in 3.x and probably will get added to 4.x as well.

7.you can not commit suicide. (makes food very important)

That would make unturned non-realistic again. You can always commit suicide in survival games. You can jump off a cliff, jump into a crowd of zombies or just not eat for a long time. In 4.x, rather than in 3x where you just press escape and then suicide, you should need to have a weapon like a pistol or knife to kill yourself with and not a menu button that you press to kill yourself.

-remove a bullet from your body

-remove a arrown form you body - and more

this is my commentary on your points. Good points after all.

I did not give much details but you got the idea
the distance from which you target is important (the damage is scarce)
the small caliber does not really give any real damage to the helmet, the vest.
assault rifle need to be very rare to increase competitiveness.
scopes are super op (NERF)
in general, military stuff should be rare (like 4 h =1 ak-9 bullets)
of course, the weapons at the farm, the city can be more common ( 1h= 1 pistol)
is just an opinion

and respawn time 120 sec i think is good

Actually, military helmets aren’t actually made to protect the wearer from a bullet, it’s to protect them from grazing shots and shrapnel from explosives. A dead-on shot will penetrate any helmet, regardless of whether or not it is military.

I doubt it does not protect.
I will prefer to shoot with a pistol in the leg, hand and wait for the victim to die from bleeding

Which will rarely happen unless the man has hemophilia.
Which apparently everyone in Unturned has.

if you manage to get direct hit into the face, but you will not succeed if you shoot from a distance.
if you shoot in victim hand or leg you disarm them
strikes in front
chances 33% dead, 33% unconscious 33% reduced visibility or drug effect

Who you calling big, kiddo?

i mean if you’re going for full realism, anything except maybe pistol rounds should absolutely just make helmets their bitch. they’re not made to protect from bullets.

anything except maybe pistol rounds

Not this thread again.

Again, this isn’t rainbow six where a pistol from 200 yards kills you instantly.
And plus, based the image you provided, a helmet can withstand 20 bullets? Nah fam, miss me with me with that PvP shit

stay at 3.0 if you do not want realism
it’s just a concept
other details deal with the developer (balanced)
I just want to say a pistol bullet in front is deadly (nearby)

Ivan, you say, “oh, 1 shot from anything can kill you herrmmmmmm” but that isn’t true. It would encourage pvp and make you paranoid, and like I said, you are all about realism but 1 bullet to the head isn’t true! That is a fantasy videogames have created among young children like yourself.