No they don’t. Games with random pointless features die out fast.

not true. games that are very simple die fast. unturned is extremely simple. its a dying game

Unturned has been around for over 6 years, and even now it still is far from dead.

theres currently under 10 thousand players online per day. thats pretty dead if you ask me

Unturned still has a very strong community, and if a game has that, I dont consider it dead.

theres currently under 10 thousand players online per day. thats pretty dead if you ask me

This is false. Both with respect to the number provided (“under 10 thousand”) and the implication that less people are playing over time (rather than growing or remaining stable).

Unturned consistently continues to be one of the most popular games on Steam.

Unturned consistently continues to be one of the most popular games on Steam.

Got these stats from here https://steamcharts.com/app/304930

EDIT: This is kinda news to me, cause I never really analyze stats for games. 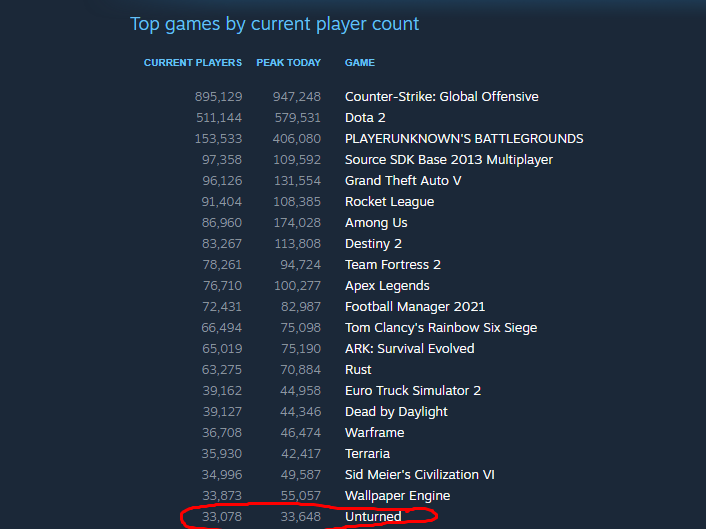 33 thousand isnt that much. especially for a free game. the games not dying, it is dead, the player count is not dropping, it it consistently low.

Pretty weird you call the 21st most played game on steam dead.

Even if there was under 10,000 players, that is still that many people within a day. 10,000 people is a LOT of people for a game as old as unturned.

To clarify: for SteamCharts data, you’re looking at peak players at a given moment, not unique players within a day. But this conversation isn’t relevant to the original topic anymore.

Yeah… you clearly don’t have a clue regarding the popularity of the game, 30k players peak is more than fine.

Wow, unturned still have 30k of players daily today? When was the biggest peak for Unturned players?

Sad.
But is there any way to know the maximum number of players?

idk why this thread exists, usually people telling us the game is dead would disappear/die themselves

If you want to know what real dying is, just look at Fall Guys.

Wow, unturned still have 30k of players daily today? When was the biggest peak for Unturned players?

The peak was August 2016, the Russia update. It’s only 55k but that’s still double/triple the game’s regular amount.

not true. games that are very simple die fast. unturned is extremely simple. its a dying game

Want me to give an example ? Minecraft. Minecraft is probably the simplest game of it’s genre. It started out in 2011. Ever since it’s first official release, the game has been gaining players. The player count reached a new peak in May 2020 with 126M players. The game is still getting updated, people still make playthroughs like they used to in 2012. Minecraft is more populated now, than ever before in it’s 8 year lifespan. And it’s a game that’s essentially about destroying blocks, placing blocks, crafting and exploring.

As @PSI_Boredom_Omega shared, Unturned still has 33,000 players actually playing it. At the time of his post 2h ago, the player count was 33,279, those were actual players that were playing 3 hours ago.

There are games that are still going with even less than 10,000 players. Insurgency: Sandstorm is an amazing game, you always find full games within a minute of searching for one and guess how many players it has ?

New World Interactive still update the game and work hard on making the game as good as they can. The only reason why the game is not dead, is because it has a DEDICATED community that supports the game. Even with 2,000-3,000 players each day, Insurgency: Sandstorm is still a fully playable, fully supported and active game. The only reason that it has a low player count, is because the game is hard and unforgiving and many people are just not cut out for games like that.

It doesn’t matter if the game is simple or complicated, the player count is not even a solid medium to gauge how dead a game is. All that matters is the game’s design, replayability and the dedication of the community.
Tetris games still have millions of players and there’s even tournaments with prizes still being played today. I don’t think there’s a simpler video game than Tetris.

EDIT: I’m not even sure that Brayden is gonna read this, because… why should he ? I disagree with his point, after all…