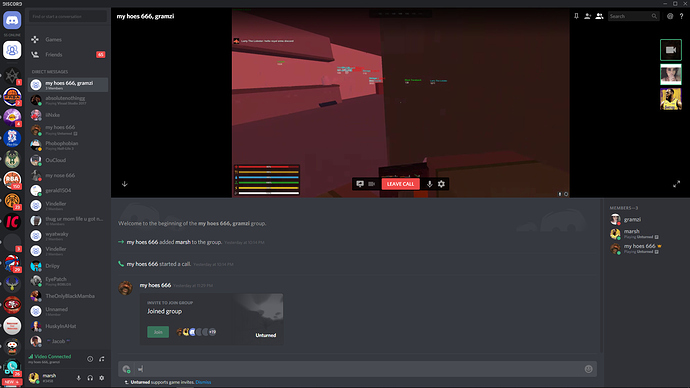 Now I run quite a lot of servers (lost count) and I haven’t caught many hackers in the past months or so. I know BE wasn’t the best when it first come out - there were tons of hackers and stuff still. And BE is still bug-inducing sometimes (remember steam overlay?)

But this is ridiculous. I can play other Battleye protected games such as R6 Siege and I haven’t spot a single hacker. Yet lately Unturned is filled with them.

Someone reported in my server discord someone was hacking. They wern’t good at the game, and they didn’t speak fluent english. I didn’t think much of it, but the person reported for hacking was saying some BS jibberish that didn’t make much sense as if he didn’t know what he was talking about.

The Spanish guy said he was shot through walls, and the supposed hacker said he jumped out of his helicopter from the sky and fell ontop of his base (his base had a nice big open roof) so it was pretty understandable that he fell and shot him. What didn’t make sense is the roof had three sentries full to the brim with Assault Rifles. There was no helicopter in sight (he said it exploded, but helicopters cant explode if you jump out - which is what he did)

So that seemed pretty impossible, but I let it slide since there was no evidence. Later one of these spanish kids were so determined to get him banned that they got on an alt and someone was able to join their team. He was in a private discord call with them and they were screensharing as they hacked (the image at the beggining of this post)

I didn’t believe him. I felt like he had photoshopped the image or something. So the kid was so determined he added me on skype (who uses skype anymore lmao) and shared his screen, which I TP’d to the hackers and saw myself with outlines on the screen. It was, indeed, fairly obvious at this point they were hacking.

I’m very frustrated by this for two reasons

1 - These hacks were designed with an amazing anti-spy concept I thought of a while ago. When I tried to spy on them the hack rendered a perfectly normal image and sent it to me, but on their end they were still hacking. This might not be exact, but it’s my interpretation as to how it works.

2 - Battleye failed to do it’s job. I really don’t get this. Battleye is litterally a client-side anticheat, virtually the most intrusive type of anticheat - one that you need to actually get and install on your machine compared to other anticheat measures that are handled by the servers end. I can find hacks relatively easy, and it makes me sick that BE hasn’t made a solution to this kind of stuff yet

It makes me so upset that I was given the illusion nobody was hacking by using my trusty /spy, but in reality BE failed to do it’s job, and theres no ways for me to stop hackers on my servers anymore. There is no longer any concrete way, nomatter how hard I try, to prove someone is legitimately hacking. There will always be some excuse or light-evidence that can easily be called server-lag or client-lag or high latency.

TL;DR
There no longer is any way for servers to defend themselves against cheaters and the only thing that can and is supposed to protect us is Battleye - which is failing at it’s only purpose

I’d appreciate it if BE anti-cheat did as god of a job in Unturned as it does in games like R6, or, at the very least, Vanilla Unturned / Rocket gave server staff better tools to find and identify cheaters instead of just /spy

And BE is still bug-inducing sometimes (remember steam overlay?)

Just to clarify: this wasn’t a bug. BattlEye intentionally disabled Steam Overlay due to security exploits after an update Valve made to Steam Overlay.

New BattlEye bypasses are made every few days, so usually after one is bannable/blocked people can always just use a newer alternative. Same applies to basically every anti-cheat.

i wrote about it a half of month ago, main issue of BE is being literally re-routed to accept hacked dlls as vanilla and so only VAC works, which bans outdated cheats

for anyone who squeak something like “b-b-b-but bottleye works bons chooters!!!” it works well, on paper, to compare PUBG and H1Z1 are doomed to 10 y/o chinamans who boost accounts as rust doing well with EAC which dealed well with hacks, leaving space only for wallhacks since ever aim getting detected easily.

So all battleye games faced the same problem? I guess that makes sense. Though as big as BE is and as many games it spans that stuff should have been fixed within a day, not the seemingly weeks it took to be resolved.

Don’t expect it to be fast service mate, regardless of how expansive it is

Atleast it purged tens of thousands of users, or else multiplayer would be actual hell compared to today

Would you say the same for games like R6, ARK survival evolved, H1Z1, etc? Can they not afford a good anticheat or code their own?

as slavs said who seek will find what they are seeking

Seeing as anyone can just make another steam account and play a free game it truly wouldn’t matter how many people it bans, it matters how good it is at passively banning new cheaters.

dont know about r6 or ark, but in csgo there are about at least one macro/wallhack, rageaim kids are kinda rare now

in rust if you got mouse with utillity buttons you can hook a clicker app and use macro to control recoil, does not counts as cheat since its hardware

Seeing as anyone can just make another steam account and play a free game it truly wouldn’t matter how many people it bans, it matters how good it is at passively banning new cheaters.

I doubt anyone could pull that off. Still the point is that you’re overestimating the effectiveness of the anti cheat by expecting it to work as if it can hammer cheaters in the slightest sight of one. If such exists, there would’ve been a high demand for that and word would spread about it.

as slavs said who seek will find what they are seeking

Though not sure what your point is

I know that CSGO has a much bigger problem with cheaters and all. CSGO has lots of big people making premium hacks, and tons upon tons of people that just make their own custom hacks. But compared to Unturned theres only one or so groups of people that are selling / distributing hacks. I’ve yet to come across any ‘custom’ or ‘homemade’ hacks by anyone. It’s always the same stuff, by the same people.

p.s. how do I quote others in my post.

main issue of BE is being so weak so it cannot deal even cheat engine, as vac trying to be 100% sure about that you are hacking. EAC is dealing well as it can even stop main source of cheaters and limit them to private hacks

Well, I guess this is the excuse I haven’t been looking for. I know eventually cheaters would find a way through…only time would tell. As for R6S, most of what I’ve heard about that game is “aimboter” here, “wall bangs 5 seconds into the round”, and “home boy looking like his sensitivity is maxed out spinning uncontrollably yet headshotting everything.” Bottom line is just that no Anti-Cheat is perfect. Cheats are a virus, they’ll evolve to resist, overcome and grow stronger. Even IF two more A-Cs are used, eventually those who don’t want to play fair will get through.

Misconfigured BE? Don’t get me wrong but BattlEye works great for a lot of games, but Unturned’s BE seems to have a lot of exploits.

Interesting stuff. I’ve had BE disabled on my servers right from the start knowing it’s useless. A bit offtopic there, but it’s still fairly easy to glitch ingame now which turns heads towards the game dev. And with the new map updates, kind of not focused on the main “safety” or the game theme, I’m starting to worry about 4.0
Back to topic, it’s probably the same with BE devs, whoever they are. They are more focused on games which are more active and popular, and possibly running after whoever pays more.

Can’t blame them if they seek high paying companies…? @RainOfPain125

There is no perfect anti cheat

p.s. how do I quote others in my post.

Highlight the words you wanna quote and a button should appear.

I’ve had BE disabled on my servers

There is no perfect anti cheat

It isn’t all about just BE, at the end of the post after TLDR I plead that there are more tools given to server staff in order to catch hackers. /spy was amazing at first, but obviously hackers have gotten past that. While cheats evolve our tools haven’t much at all. Even if BE fails to do a good job we should be given more options and tools to detect and punish cheaters.

Do I have any suggestions on what tools in particular? No. I’m just here to say we do need them. Hacks are virtually undetectable right now, which is very upsetting to me as both a normal player and a server hoster.

The only real way to catch a hacker is to have Rocketmod and watch them in vanish, waiting to see if they do something as blatant as shooting through walls or shooting through the terrain. Both of which most people are smart enough not to do if they know staff are online. Plus, watching them in vanish is long, exhausting, and isn’t always concrete evidence. For a popular server with 24 players constantly such a method would be too ineffective to use.