(Uh, this is going to take a long time so you may want to get some snacks.)

I will mainly focus on the usage of the shovel; the metal detector is rather a minor point.

Before I continue, it’s fair to mention that the digging mechanic and the metal detector have been already suggested, so it’s not a groundbreaking idea by myself, but my try to extend these thoughts:

Suggestions (w/ Explanation): Make it where bases are more rare: Now heres the thing, I want to see more of a survival thing since most people can setup a base within the hour, maybe add some of the huge walls like in rust and a gate so that can be the base until the requirement. Why you may ask, well i kinda wanna have a whole bunch of people with those camps and can also be used to take over part of a city and make it a friendly settlement. Example: [1b8e236763d4e1344249e0d46860f5da] [7…

Entities should leave tracks in mud and snow Different entities, movements, and shoes should leave distinct tracks These tracks disappear over time or in during storms Snow accumulation, or snow overlay with snow drifts at certain fixed locations, during snow storms. The ground should be muddied by, and puddles created by rainstorms Trash, leaves, sand, and snow (varies by place and/or season) accumulate at certain fixed locations during windstorms Shovels can be used to dig/entrench into snow,…

Diffrent kinds and levels of dead/hazard/danger zones U4 Discussion

Sorry if my “writing skill” is at a low level, im working on it So atm there is only one type of area/zone in unturned 3.0 that requiers you to have sertant gear to be abel to visit the area. So here I have some ideas of new ones that could work really well in unturned 4.0 and would add more content and more to the progression of the game. And again NOTE that these are only ideas and suggestions on how it could be and not how it should be in the end, so please remember that when reading through…

Before you ask, I am not going to propose making the shovel affect ground level or creating visible physical holes, as suggested in given links. Although trenches and underground bases would be interesting, there are obvious issues: Making holes would break the game by either making locations unaccessable or underground areas easily reach- and thus exploitable. Multiplayer servers would be less enjoyable: The entire world could be completely devastated, with holes being everywhere, similiar to wooden structures / ruins made by players.

So instead, I suggest to have the shovel not affect the environment physically, but by having the player either perform a digging animation or leaving a small pile of dirt behind which disappears after a while, similiar to trees and metal boulders regenerating.

Chainsaws are better than axes, jackhammers better than pickaxes. So there should be an electric uprgade for the shovel as well. Would consume power, make noise, but allow to click-hold on the ground. Maybe some sort of drill.

Here’s an example of an animation from DayZ (honestly, it looks really stale, but it gives an idea of what I mean:

When talking about details, it would be nice to see the shovel being sticked into the ground, maybe using your foot to glide the shovel in easier. By lifting the shovel, little piles of dirt (or whatever soil you are digging in) lie on your shovel’s blade and would be thrown aside.

When exavating or burying something, a little mound forms where you were digging. Depending on the area’s material, the pile adjusts and becomes camouflaged. When exavating in areas with grass, the mound will have a brown appearence (dirt) at first, but will adjust after some time. When leaving the hole empty, it will disappear and the spot will look like before.

(The ability to dig can be compared to fishing.)

Digging will take some time to complete, unskilled players having to spend a while for one hole, maybe digging 30 times or 20 seconds. This might discourage players to spam traps (will discuss later).

You will be able to dig almost everywhere. Materials like grass, soil, sand, gravel, snow and other soft ground types pose no problem, while harder surfaces like rock will be harder to dig in, maybe using a pickaxe to loosen the ground. Roads, asphalt and floors inside buildings won’t be able to dig in (unless there are available piles of digable materials, like collapsed ceilings underground).

An old game named ‘Stranded 2’ has digging nicely implemented, even has a skill branch for this task:

Just as any other action, skill will make your digging ability better. Effects that are enchanced could be:

1 - Digging This skill increases whenever I dig using shovel 25 - Scooping You do not aimlessly poke around in the ground anymore but chim it systematically, hereby increasing the chance of findings. 50 - Shovel amateur Carefuller digging enables you...

Like axes and pickaxes (and their electrical variant), shovels would be the third tool to scavenge the environment for resources and items. There could be stuff as:

Depending on material type and local spawn groups, there would be a specific chance to find items, with some being restricted to certain materials (you cannot obtain sand when digging in grass etc.).:

Similiar to airdrops, there can be randomly spawned dirt mounds that will have a higher chance (but no garantee) of finding very valuable items that can be easier found via metal detectors (will come to that later). Or randomly spawned map charts (outside of camping spawns) which will have a location mark to an extremely valuable item, like legendary items. In other words, treasure hunting,

Since a lot of traps proof ineffective against other players because of being too visible and thus doomed to fail, there could be the ability of burying traps underground or making them much more camouflaged. I thought about:

Might be ridiculous, but I thought about Animal Crossing’s pitfall traps: 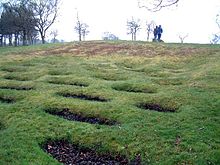 Lilia (Latin plural, meaning "lilies" in English; singular, lilium) are pit traps arranged in a quincunx pattern dug by the Roman armies in front of their defences. Frequently they had sharpened stakes set inside them as an extra obstacle to attackers. Lilia have been found in front of both Hadrian's Wall in England and the Antonine Wall in Scotland. 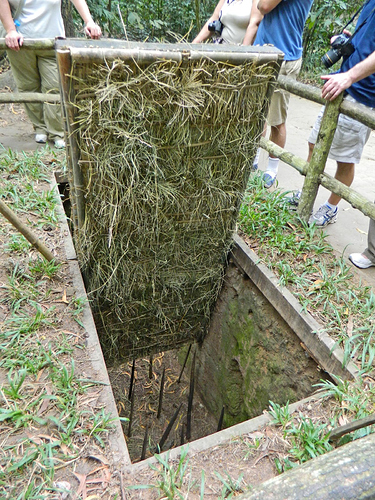 Because this might render these traps too overpowered, these would be their downsides:

-Since holes are artificial, their cover will appear slightly odd compared to their surrounding (having a slight different hue, pattern of leafes, sticking out of the ground a bit)

-There’s the phenomenon of leaking mines causing plants to change in appearence due to TNT contaminating the soil. When having plants growing in a supposed minefield, plants would have an odd color (red flowers where only blue ones grow) or appear damaged (dried out plants among healthy ones). However, this only applies to mines laying around for a long time, so this might be a more realistic feature for minefields part of the mapdesign: https://www.livescience.com/47377-plants-sniff-out-land-mines.html

-They would be not completely located underground; slightly exposed, but enough to be overlooked quickly

-Alternatively, having a similiar color to the surrounding ground or ghillie-like properties

Do you like these suggestions regarding the shovel mechanic?

This tool informs you via audible signals about the position of items hidden nearby. It increases in volume when in proximity of the buried objects.

It acts like binoculars or fishing rods as a tool, cannot be used as a meele weapon.

It’s quite handy when used together with a shovel allowing for a directed search for hidden items. Solely, it can be used as a warning system against traps, namely mines.

There’s no distinction between the quality of objects. Found object can be a weapon or treasure, or just regular trash. Better model allows to differ so you don’t have to dig for a can or old boots.

Do you like these suggestions regarding the metal detector mechanic?

At last, here are two ideas I came up but which would be rather problematic than enjoyable:

While mines should be most likely found around military tier locations (and duds spawning on old abandoned military locations), there could be a rare chance of finding duds everywhere. There were always cases in former wars where grenades or explosives did not detonate, being left forgotten and posing a threat for living beings. They could be hidden traps when being unlucky. Although it might be realistic, I can imagine this to be extremely annoying when out of nowhere you get blown into pieces because you stepped on an aircraft bomb. This can be restricted to more advanced areas to increase the challenge and to give beginning players a chance to prepare themselves. Also, to be not a useless feature, they could be defused and give a huge amount of explosives to use. From a realistical point of view, that’s rather unrealistic, but hey, it’s an idea.

You can make a hidden inventory yourself by digging a hole and placing a box, crate, cooler, whatever storage inside (except for fridges or wardrobes, that would look rather odd). It will be accessable, as long as you have it dug open. When burying, it’s unaccessable for you and for others, unless you dig it out again. Could be interesting, but again, there are some issues:

Regarding the changes on the metal detector -

Advanced: Detects and gives information about what might be possibly hidden underground. It won’t tell you the items exact identity, but what item group the object belongs to (weapons, trash, components etc.)

You can make a hidden inventory yourself by digging a hole and placing a box, crate, cooler, whatever storage inside

Imo you should be able to dig a hole deep enough for a storage item, put the said storage item in and cover the top. Technically, you can put anything in a hole regardless of size (as long as the hole is big enough) so shoving a mini-fridge full of canned beans in a pit is perfectly possible.

Chainsaws are better than axes, jackhammers better than pickaxes. So there should be an electric uprgade for the shovel as well. Would consume power, make noise, but allow to click-hold on the ground. Maybe some sort of drill.

I see what you did there. What I’m guessing how the shovel works is like how the digging in Sea of Thieves works.

That’s an ice auger. Augers are used for anything you need to dig through. I’ve referring to an auger typically used for drilling post holes, but realistically you could use an auger for some of what OP is suggesting (the tamer ideas). As far as game mechanics go, you’d probably be able to do whatever the mechanics of the shovel would be (if the auger is meant to just be an electric shovel).

If we wanted to be more realistic, then a shovel and auger would do slightly different things, and you really wouldn’t get an “electric shovel” at all.

I really like this. I love the idea of foraging and living off the land. Was also thinking of making an in depth post on a root cellar for food storage. Having it underground brings up a lot of potential issues. Perhaps the shovel would be needed to craft this. I want to see an option for players who don’t have electricity to be able to preserve food underground.

I love the shovel idea. However i hate metal detectors. It’d remove the whole grave robbing aspect of the game because you could just find all the good loot instantly from someone’s grave. but yeah i like landmines so fair tradeoff.