What do you think will happen to Unturned cosmetics once Unturned II is released?

So I think they will not be transferable to Unturned II, and they will slowly decline in price over the upcoming months after the release of Unturned II Early Access, but not beforehand. Buy orders will be cancelled.

Why are you asking this? Obviously they wont be transferable, and their prices are already bad. You answered your own question.

Are we going to keep our cosmetics? U4 Discussion

Are the cosmetic items/skins going to be ported over to 4.0? I hope if they are, that some cosmetics will use the cool realistic animations mentioned on the trello (wiggling santa hat lol)

If unturned 4.x will be a different game on steam, does that mean we will lose all of our skins for the game? I payed over $100 on unturned skins and losing then would be horrible, no one will buy them after the release of 4.x.

Update: G2M told me that Nelson said that no one will lose their skins so

What will happen to our unturned 3.0 skins U4 Discussion

Will we be able to use them in 4.0 or will we be left to buy new skins?

My post asks for your opinion, not for the opinion of others. Please use your own ideas!

Your not asking for opinions. You asked a question which is pretty self explanatory (which you even answered). What @Oyamat is saying is that there are plenty of posts about this and you are just being annoying by making ANOTHER post about 3.0 skins.

bro chill, he was just curious. anything can happen to 3.0 skins. what if 4.0 boosts in popularity that people start playing 3.0 for fun? surely those prices will increase. what if 3.0 randomly boosts in popularity while 4.0 is doing good, but its not people who saw 4.0 first? anything could happen, we don’t need to be passive aggressive about it.

he is just trying to start discussion and he has people like y’all calling him annoying and telling him to use the search bar.

Nelson already answered this question about a year ago. Please read the devlogs and trello before asking questions/making suggestions.

Decline from 5 cents to 3 cents

Nelson already answered this question about a year ago. Please read the devlogs and trello before asking questions/making suggestions.

Sure, let me just read tens of thousands of words through tons of devblogs to find this exact piece of information before posting a subtle small topic.

Or, I could just post the topic? Maybe we shouldn’t shame people for being a little lazy/ignorant.

IMO 3.0 skins were just exploiting the communities love of the game at the time to generate revenue. All we have left is a bunch of skin/cosmetic garbage that I personally hate. infact, post might be coming soon.

Honestly yeah, I am sick of all the greedy capitalist stuff that comes with a lot of modern games.
Also, it takes a 30 second google search to get the answer to the question, you don’t need to even go to the devlogs to find it.

who said you need to read devlogs tho, i have something for you :D.

type “cosmetics” or “skin” there and you got your answer after a few seconds of scrolling if you don’t wanna ‘waste’ time reading ‘tons of’ devlogs.

IMO 3.0 skins were just exploiting the communities love of the game at the time to generate revenue. All we have left is a bunch of skin/cosmetic garbage that I personally hate. infact, post might be coming soon.

I prersonally disliked them because it was really easy to hide your clothing and get easier stealth, as well as hide the gear level someone is at, making deciding which fights to pick harder. 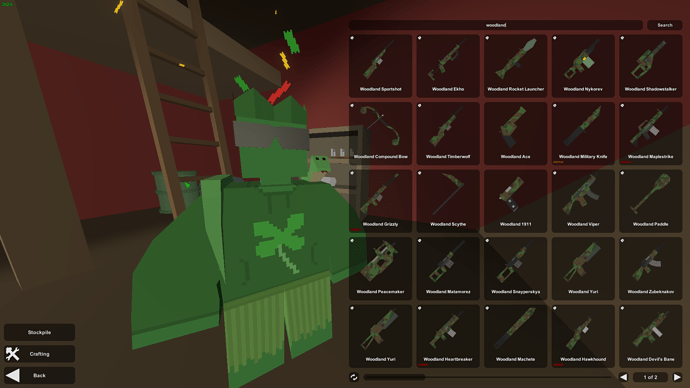 ^ I’m wearing a full spec ops loadout (without backpack, you can use the cape for that), helmet and all underneath these cosmetics. You can’t tell what gear level I am at, and it’s stupidly unfair stealth wise, though stealth is hampered by pisspoor performance.

I don’t really think they were exploitative in the slightest, I saw it as a cheap, optional way to support Nelson and the game, and I think they did their job as that pretty well. While I think Skins are a fundamentally bad idea in a game like this, though I’m sure monetisation without it would be hard.

Plus doesn’t that cost not more than $5? It seems broken. Plus if anything you can color your skin to the same color as whatever map you are on.

Plus doesn’t that cost not more than $5? It seems broken.

No. The weapon skins are all around 3 cents, with the more powerful, popular weapons sometimes reaching the 10s and 20s, maybe 40 for stuff like the grizzly.

The hoodie and shorts are both 3 cents, the snake is 12, the sunglasses are 1 euro, but aren’t actaul the meta loadout, I just liked them. The party hat is also only 3 cents, but I got an unusual from a crate.

It doesn’t really cost much at all, no.

Due to the pisspoor performance and crappy engine, it’s pretty easy to see playermodels, only at higher settings do you struggle. Playermodels render before stuff like bushes, and with lower settings, especialy for grass, it’s very easy to spot players. Stuff like nightvision doesn’t help either.

It might conceal you for a bit at longer distance, but it’s not gamebreakingly stealth. It is pretty damn strong at closer ranges though.

Powerful, sure, broken, absolutely not.

Plus if anything you can color your skin to the same color as whatever map you are on.

Yep, with the camo skins to match.