Essentially this post goes off a temperature system not really established but has been teased on Trello wish list. I know that Trello page is old but this seems like a very reasonable addition to be added in one way or another, especially with the changing of seasons to be added to U2.

As well a lot of good discussions have gone up about temperature, many of them referencing the old 1.0 antique version system. And building off a improved version of that system.

Also the big inspiration from the post came from the idea I had of making tents and camps useful in the game rather than a cosmetic thing. I have seen several posts discussing tents and camping supplies as I think fans of survival find that aspect attractive. But realistically thinking why would you stop to set up a tent and cooking pots other than on a role-play server. Hopefully this post can offer an advantage and reason for this aspect of survival that players could actually utilize with the addition of treacherous weather.

I believe with the addition of something like a temperature bar, players will often times need to seek shelter. With towns being filled with bandits and turned (I know mobs will free roam). You might want to set up camp off in the woods behind a hill or secluded area to avoid rain or freezing. Just a guess but gathering the supplies for building a house may be a little harder than in 3.0, so players will need an early game shelter for an early “base” or on the go weather protection. 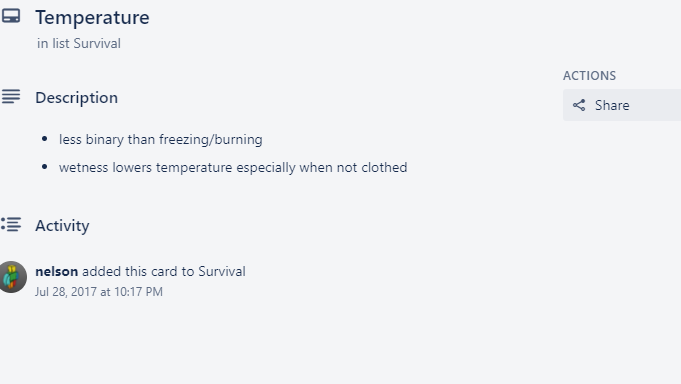 TLDR: Basically a system of comfort or a state of being rested would increase your endurance against the elements and offer some different buffs as decreased energy loss or consuming less calories. These buffs would be given by passively being in your house, near your camp, or consuming unique foods. Important to note not engaging in these actions would NOT affect you negatively or set you into a state of fatigue, rather just an added bonus to help you survive.

A way to store body heat in reserve. And prepare for the cold rather than letting it control you.

Hearty Meal - Certain unique foods and drinks could offer resistance to cold weather and extreme heat. For the sake of comparison, high end foods in 3.0 really didn’t have much of a use, and where often worse than just raw lettuce. So I think adding a utility buff behind them on top of them just being good food, cooking could be a lot more useful in survival along with the cooking skill.

This is something I’ve personally thought about a bit (nothing officially related to U4’s development). I like systems with a complex learning curve, that are still easy for players to jump into and largely ignore.

So: is it easier for players to gamify consumables (e.g., providing various “buffs” beyond just stat increases/decreases), OR is it easier for a more realistic approach (i.e., the player’s cold tolerance is rather lenient, because of calories being burned while storing/generating heat).

One is a gamified system, the other is less necessary active maintenance/input by the player. The gamified system focuses on making certain consumables inherently good (due to unique buffs), while the other focuses on developing something like a calorie or nutrition system.

So: is it easier for players to gamify consumables (e.g., providing various “buffs” beyond just stat increases/decreases), OR is it easier for a more realistic approach (i.e., the player’s cold tolerance is rather lenient, because of calories being burned while storing/generating heat).

I could see both of those working. My initial idea was more of your first example, with items inherently being better with buffs. But I was also going off the assumption we will see a calorie system in the game rather than our 100% food and water bars. I never really thought of calories being burned to warm up your character though. Which would make sense.

I kind of like those mmorpg elements with buffs from special foods and thought U2 could capture something similar but unique to the survival genre. My thought was that those special foods would not only provide a buff but could be high in calories depending on the food.

E.g. A moose steak and seasoned moose steak would still provide the same calorie rich supply, but the seasoned one, using herbs from foraging, would grant you the HEARTY MEAL buff, as it tasted a lot better.

I know in DayZ you can only hold so much food in your stomach but you can hold a lot more calories with different foods. So yes you can eat a bunch of lettuce and it will fill your bar, but it will not last as long as say a stew or meats, saturation. I was thinking something similar to that. This would allow players to use stuff like lettuce to make stews and benefit more from the ingredients, with still being able to eat it raw.

But my idea was exaggerating comfort through the idea of good food or a comfy house. In a survival situation you would be more worried about general food intake and any kind of shelter. So eating a better tasting steak won’t fill you up more, but would probably make you feel better and affect you somehow.

I use to do a lot of backpacking and on 3 day cold hikes, something like good warm food or a coffee really made you feel a lot better. Boring food was fine but eating something good really changed a lot. That’s why I wanted it added as a buff. Cause it is not necessary, but definitely helps.

Players shouldn’t be forced to make fancy foods, but advanced recipes would offer generous benefits. So yes I like “gamified” consumables. (May be using that term wrong there lol.)